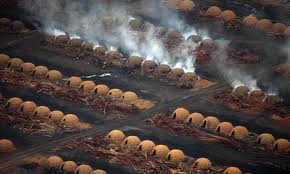 BMW, Mercedes, Nissan, GM and Ford are allegedly linked to illegal logging and slavery in Brazil

BMW, Mercedes, Nissan, GM and Ford are learned to be sourcing out their materials from Brazil which does illegal logging and slave labor to produce the pig-iron.

Although all these automakers are potentially leaders in the race of producing green cars to protect the environment of our planet, however these automakers have been found connected with companies that produce pig-iron through illegal deforestation of Amazon and force labor.

Pig-iron is a crucial element in making steel and cast-iron used in automobiles, and is procured through using massive quantities of charcoal.

Brazil is a major exporter of pig-iron, and reports issued by the Brazilian government, International Labor Organization and US Department of Labor indicate that charcoal used by many pig iron suppliers in the Amazonian state of Pará was obtained through forced labor and illegal logging of protected and indigenous lands.

This latest report was filed by Greenpeace who alleges that total of eight international companies are linked to the two major Brazilian exporters of pig-iron who are producing pig-iron through obtaining charcoal from suppliers who have a history of procuring it from illegal camps and concealing of illicit behavior.

Bloomberg broke a major story in 2006 on US car makers’ supply chains being linked to slave charcoal camps, but Greenpeace claims that despite promises from high profile American and European companies such as BMW and General Motors (GM), many continue to buy directly or indirectly from illicit companies.

Ford, GM and Nissan were all named in the original Bloomberg story.