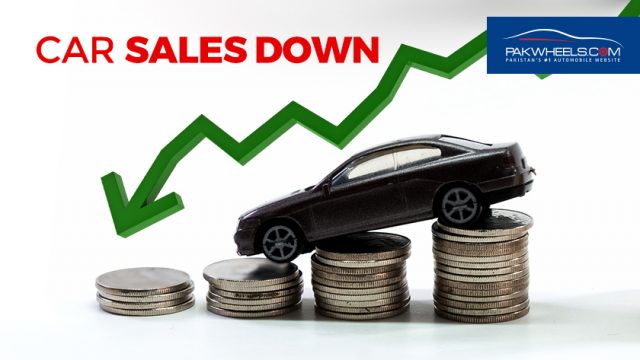 The auto sector’s slump continues as car sales decline by a significant margin of 44.06% in the first four months of the ongoing fiscal year, as per the data released by Pakistan Automotive Manufacturers Association (PAMA).

The auto industry of Pakistan is going through turmoil, and the circumstances have only worsened over time in the fiscal year 2019-20. The car sales have seen a comparatively higher drop during October 2019 as compared to its previous months. A considerable drop of 55.16% was observed in car sales during the last month as compared to its corresponding period last year.

Such a situation was already anticipated as the sales squeeze towards the end of the year. The last two months of the year are expected to go even worse than the current situation. Overall, the sales figure has dropped to 44% in the first four months of FY 2019-20 as compared to the same period last year. The auto sector is struggling to find any momentum owing to the insanely higher prices of automotive products in the market.

The prices were jacked up by the auto manufacturers multiple times in the past year due to a sharp depreciation of rupee against the US dollar. Furthermore, the government levied new taxes on automobiles such as Federal Excise Duty (FED) that raised the prices even more. On the other hand, the sales of motorbikes have also dropped by 13.20% in October 2019. The first four months of the fiscal year 2019-20 recorded a decline of 16.31% in the motorbike sales as compared to last year. Note here that all the stats mentioned in this article are taken from the PAMA website.

As we discussed in the last month’s stats, Honda Atlas remains the most affected automaker in the current situation as compared to others in this league. The sales of passenger cars of 1300 cc and above also reveal that Honda’s combined sales of Civic and City dropped by 70.19% in this period. It was followed by Suzuki Swift in this segment that observed a decline of 63.25% in sales. Toyota Corolla is third on the list with a drop of 60.21% in its sales in the period under review. The total sales of cars of 1300 cc and above segment were down by 64.81% in the July-October period during FY 2019-20. Have a look at the table below for complete stats.

The 1000 cc segment of locally manufactured cars in Pakistan includes the two models of Pak Suzuki, i.e., Cultus and Wagon R. However, the Korean auto manufacturer KIA has also recently launched its 1000 cc hatchback Picanto in the country which is a direct competitor of the above-mentioned cars of Pak Suzuki.

The sales of Wagon R have been the most miserable thing for the Japanese auto manufacturer ever since the launch of its all-new 660 cc category Alto. Wagon R used to sell like hot cake in the local sector until the start of this year. Now its sales have gone into a free fall as it observed a drop of 75.97% in the first four months of FY 2019-20. The month of October was the worst-ever for Wagon R sales as it dipped by 84.12% on year on year basis. On the other hand, Suzuki Cultus is performing comparatively better in the hatchback segment, but its sales have also plunged by 33.92% in the period under review. Overall, the sales went down by 59.50% in the 1000 cc passenger car segment, as explained below.

Below the 1000 cc car segment, Suzuki Bolan sales went down by a whopping 72.19% in the July-October period this year. Suzuki Alto remains the top performer among all cars in the local industry in this period. Ever since its launch, the company has sold more than 4000 units every month. The 660 cc Alto has driven the sales of Pak Suzuki and held its ship to some extent. Otherwise, the company’s sales were in a nosedive. Pak Suzuki has so far sold 16,991 units of Alto in the last four months.

The overall passenger car sales have dropped by 55.16% during October 2019 as compared to its corresponding period last year. In the first four months of the current fiscal year, the local auto manufacturers sold only 40,586 units as compared to 72,563 last year, down by 44.06%.

Currently, there are three major car manufacturers in the country, i.e., Pak Suzuki, Toyota Indus, and Honda Atlas. However, new players have joined them under the Auto Development Policy (ADP) 2016-21. Honda Atlas went through a drop of approximately 68% in car sales followed by Toyota Indus and Pak Suzuki with 58% and 30% decline in sales in these four months period.

The below-mentioned stats reveal the individual sales of these three Japanese automakers in the country.

Pak Suzuki has a strong presence in the local hatchback segment. In the current economic crisis, all the models of the company are facing reduced sales. Perhaps the entry of 660 cc Alto has strengthened the company’s footprint in the country.

Apart from Alto sales, the company only managed to sell 13,129 units. The company sold 16,991 units of Alto in the first four months, which is higher than the overall sales of the company. The sales of Bolan and Ravi declined by 72.19% and 65.90% in this period, whereas the sales of Swift observed a significant drop of 63.25%. On the other hand, Wagon R suffered a massive blow of 84.12% drop in sales during October 2019 that resulted in an overall decline of 75.97% reduction in the sales of the company’s hot-selling hatchback in the first four months of FY 2019-20.

Suzuki Cultus suffered less damage as its sales were down by 33.92% in the period under review. The overall sales of the company’s cars were recorded at a drop of 29.81% in the July-October period.

Toyota Indus Motor Company (IMC) is also having a tough time in the current situation of the auto sector as its overall sales have recorded a decline of 57.83% in the July-October period as compared to its corresponding period last year. The company’s sales are majorly dependent on its popular sedan Corolla. However, Corolla has also lost its charm due to sky-rocketing prices, and its sales have gone down by 60.21% in this period, which is a massive setback to the company.

It sold only 7485 units of Corolla as compared to 18,814 units in the same period last year. The automaker is also forced to reduce its production since July and has so far observed 50 non-production days (NPD’s). The company has piled-up unsold inventories due to low demand in the market. In the ongoing month, IMC has also decided to work on only single shifts to reduce its costs. The sales of its SUV Fortuner and Hilux also went down by 57.52% and 37.16% during this period as compared to last year. See the table below for details.

Honda Atlas Cars Pakistan Limited (HACPL) is suffering the most in the current situation of high prices of cars and low sales volumes in the local market. Honda Atlas relies on its two popular models for sales, i.e., Civic and City. The company no more reveals separate sales stats for both cars now. The combined sales of Civic and City were only limited to 4961 units in the July-October period as compared to 16,643 units in the same period last year. Therefore, a massive dip of 70.19% was observed in the sales of Civic and City on a combined basis.

The automaker recently launched a facelift model of its compact SUV BR-V, which has helped reviving its sales in the last month. However, the overall sales of BR-V in the first four months of FY 2019-20 remained down by 51.70%.

The total sales of Honda Atlas cars were recorded at 5838 units in this period as compared to 18,459 units last year, down by a massive 68.37%. It is worthy to mention here that the automaker is also observing non-production days (NPD’s) since July, and the total sum has added up to 85 days from July to November. The company recently announced to work for only seven days during November 2019, which is an alarming situation for the Japanese auto giant.

Sales of trucks & buses reduced by half:

LCV’s, Vans & Jeeps sales dropped by more than half:

In this crisis, light commercial vehicles, vans, and jeeps have also suffered quite badly in the local sector. The sales of Fortuner and BR-V both have reduced significantly by 57.52% and 51.70%, respectively. In this period, a total of 1244 units were sold as compared to 2680 units last year, down by 53.58%.

Among all the brands of tractors in Pakistan, Massey Ferguson suffered the most in the first four months of the fiscal year 2019-20. The company sold 6823 units of its tractors in this period as compared to 13,830 units in the same period last year. It shows a decrease of 50.66% in Massey Ferguson sales of tractors. On the other hand, Orient IMT and Fiat also faced comparatively reduced sales of 16.03% and 12.99%, respectively. The overall decline in sales was recorded as 38.96% in the July-October period this year.

The high-rising prices of automobiles have left the consumers with no choice in the local market. In this situation, the masses are forced to use the two-wheelers for commuting inside the city. However, the prices of motorbikes have also gone much higher as compared to a year ago. This segment of the auto sector is also struggling these days as the sales of motorbikes have gone down. Atlas Honda, the largest motorbike manufacturer in Pakistan, suffered a setback of 10.31% reduced sales in the first four months of FY 2019-20. The company managed to sell 335,134 units of its motorbikes in this period as compared to 373,698 units last year. The sales of Suzuki, United, and Road Prince also decreased by 13.15%, 24.48%, and 34.62% respectively in this period. Only Yamaha showed growth during this period of four months as the company sold 8707 units as compared to 8406 units last year. The overall sales of motorbikes went down by 16.31% in this specified period during FY 2019-20.

The local auto sector is showing no sign of recovery as the year 2019 is headed towards the end, and the sales volumes generally reduce in this period. Also, the auto manufacturers are not willing to offer any discounts on their automobiles to boost up the sales to some extent. Furthermore, the government also needs to lift unnecessary taxation, which has played its part in hampering sales. However, the economic situation is improving as the local currency has gained some value in the past four months. It suggests that the auto sector will get some revival in the second half of the ongoing fiscal year.

Share your valuable opinion in the comments section below. Stay connected with PakWheels for more updates on the automobile industry.

Get ready to feel the thrill at 4th Thal Jeep Rally

Faisalabad Auto Show to be held on 17th November 2019