Hyundai Nishat Motors has launched an all-new compact hybrid Sedan ‘Hyundai Ioniq’ in Pakistan on 8th October 2019. Will this car give Toyota Prius a run for its money? Let’s find out.

Another “Addition” to Hyundai-Nishat Family

Hyundai Ioniq was introduced at the Hyundai’s digital showroom at Emerald Tower, located in Clifton, Karachi where it grabbed the attention of many. Everyone is expecting a lot from this new entrant in the local market. Hyundai Ioniq has been spotted on the roads on several occasions and its introduction in the local market by Hyundai was only a matter of time. The first thing that comes to anyone’s mind regarding Ioniq is its competitor in Pakistan which is Toyota Prius 4th generation.

The all-new compact Hyundai Ioniq is powered with a Kappa 1.6 Atkinson GDI engine which is 1580 cc to be exact. The powerful engine of Ioniq generates a maximum power of 104 hp at 5700 rpm and a maximum torque of 147 Nm at 4000 rpm. It is coupled with a 6-speed dual-clutch transmission with front-wheel drive mode. On the other hand, its counterpart Toyota Prius enjoys the luxury of a slightly more powerful Atkinson Cycle engine with 4 in-line cylinders and 16 Valve DOHC. In terms of general saying, Prius is a 1798 cc hybrid sedan produced by Toyota with the sequential multi-port fuel injection system. The engine of Prius can produce a maximum power of 72 kW at 5200 rpm along with a maximum torque of 142 Nm at 3600 rpm. The luxury dean of Toyota is provided with a continuously variable transmission (CVT) system. Overall, both hybrid vehicles are powerful units in terms of their engine capacity.

Since both the vehicles are hybrid units, they are coupled with an electric motor and battery pack with their respective specifications. Hyundai has powered its hybrid with a permanent magnet synchronous motor with 1.56 kWh capacity. The electric motor is mated with a lithium-ion polymer battery pack that helps the vehicle in achieving a maximum power of 44 hp and 144 Nm of torque while driving on battery mode. In contrast, Toyota Prius is equipped with a motor coupled with a nickel-metal hydride battery which can produce a power of 71 hp and 163 Nm of torque. While comparing the two, Toyota Prius has a more powerful motor and battery pack which is understandable, considering the size and engine power of the vehicle.

The newly introduced Ioniq has a spectacular front radiator grille which is painted in glossy black. The angular design of the radiator grille ends up at headlights on both ends. The projection headlamps of Hyundai Ioniq are provided with LED daytime running lights which gives a stunning look to the vehicle. As we move to the side of the car, the door handles are found coated with chrome finish. At the rear side, there are LED rear combination lamps along with a spoiler that has a high mount brake lamp installed in it.

Toyota Prius, on the contrary, is far more muscular, aggression filled the front-on unit. It has LED headlamps with daytime running lights along with the front and rear fog lamps. The popular hybrid model of Toyota is a complete masterpiece of aerodynamic design. With a low center of gravity, the car has a coupe-like roof-line. Besides that, it has trapezoidal shaped LED combination lamps at the rear side. The sleek and sporty look of Prius is an automatic choice for any car enthusiast under the features provided by the manufacturer. 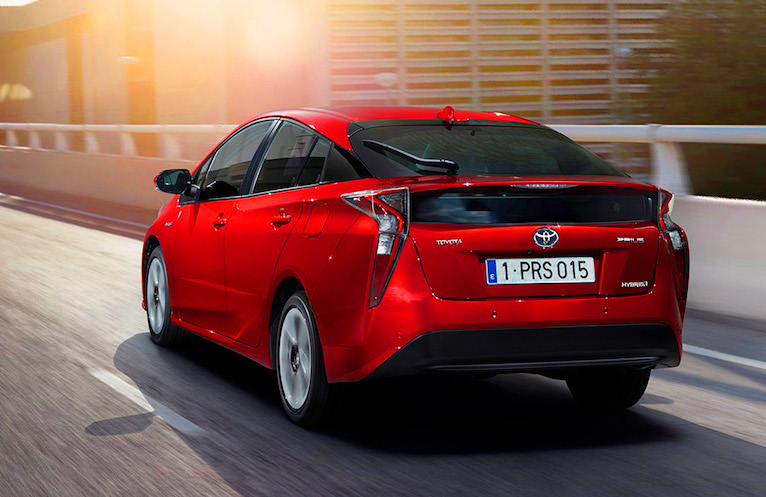 For what we know so far about Hyundai Ioniq, it has a wonderful cabin space with advanced features integrated by the company. The interior looks simply brilliant under the black tone used by Hyundai. It has a spacious cabin with enough leg or headroom. The vehicle has several features including automatic air conditioning with climate control. The air vents are beautifully designed and the build quality of the dashboard and other spaces is simply amazing, as one can expect from Hyundai. The vehicle has electrically adjustable and retractable side mirrors along with a steering wheel tilt and telescopic adjustment feature. The auto headlight control makes it easier for the driver to adapt to different lighting conditions on the road. The automatic cruise control option is also available in Ioniq. The rear seat has the reclining option to a 60:40 folding ratio to adjust additional luggage. The cabin has a front personal lamp included as a basic feature. However, it has a wireless phone charger that is somehow unique in the local market.  With the option of keyless entry, Hyundai Ioniq is a simply wonderful addition to the Hyundai Nishat family in Pakistan. 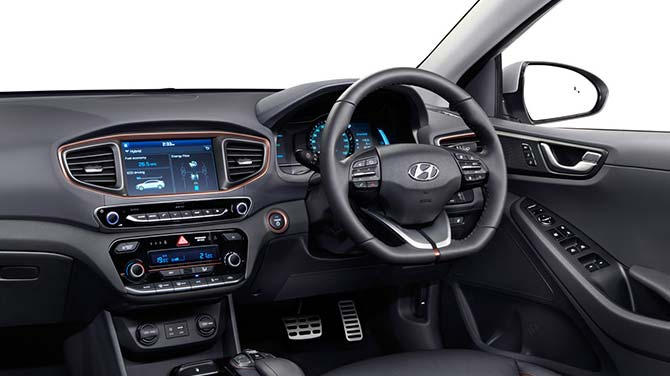 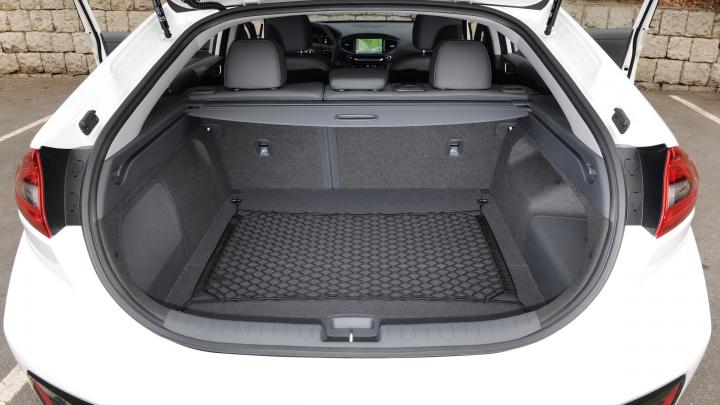 Toyota Prius, 4th generation, offers a cabin with a spacious feel with an elegant black-tone iconic dashboard of Toyota. The sedan has dual-zone automatic air conditioning with a humidity sensor that adjusts the level of cooling. Prius is also equipped with features like cruise control and switching between the driving modes. For additional comfort and back support, the driver’s seat has lumbar support powered by electric adjustment controls. The three-spoke steering wheel can be adjusted in accordance with the driving posture of the driver. The inside door handles are chrome coated along with the power windows and smart entry system in the vehicle. Toyota Prius is a tremendous family car with a brilliantly quiet cabin and multiple functions to offer. 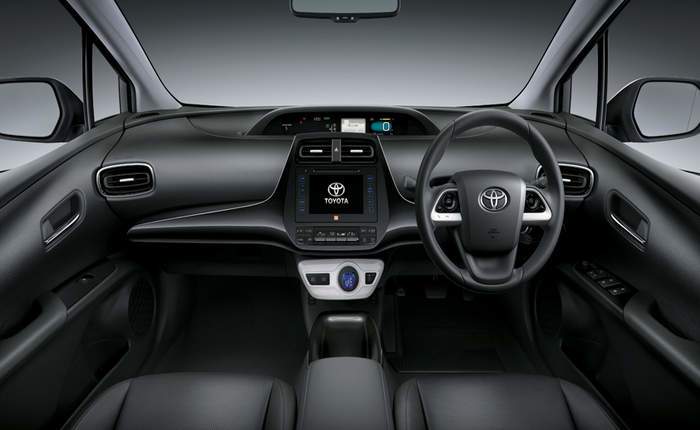 Hyundai Ioniq is equipped with a 5” touchscreen infotainment system with an MP 3, Bluetooth, CD, AUX and USB connectivity. The touch panel interface displays the information of the song you play through the auxiliary audio jack or USB port. However, these are essential features any car of this range definitely comes with. Moreover, there is a 7” LCD installed in Ioniq for the instrument cluster display right in line with the steering wheel, which feels brilliant and eye-catching. All the necessary parameters including the fuel gauge, driving mode indication, etc. are displayed here. The wireless mobile charger feature in Hyundai’s Ioniq is unique of all discussed here.

See specs and features below: 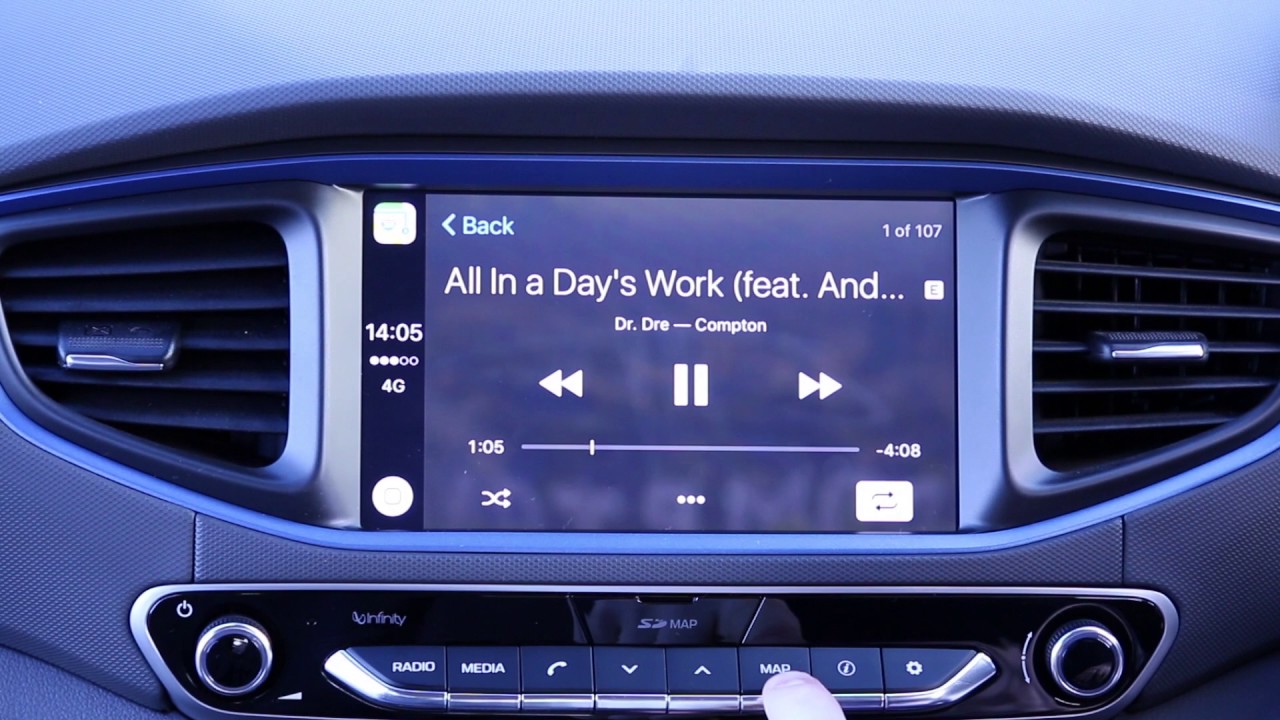 Toyota Prius, on the other hand, has an ultra-responsive sleek tablet-styled 7” touchscreen which offers drag and flick controls compatible with a smartphone. Besides this, it also has similar connectivity features including a USB port, BT and AUX for entertainment purposes. The multi-information display is right in the middle portion of the dashboard that displays all the important parameters including fuel consumption history, average fuel economy, distance to empty, hybrid system indicator, trip distance and so on. 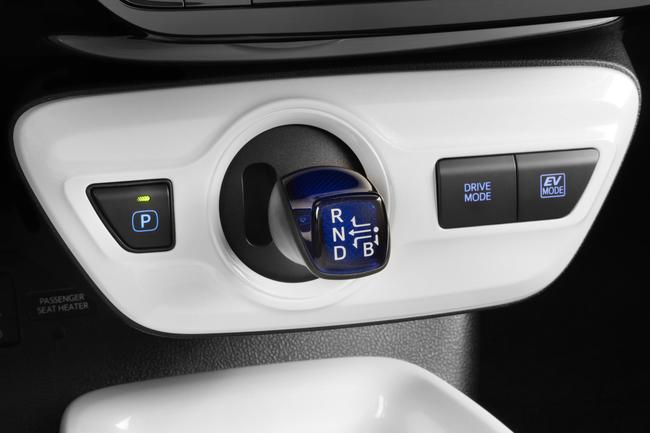 Both units have their own unique interfaces and identical connectivity features. Toyota has its unique instrument cluster display positioning in Prius whereas Ioniq comes in a traditional display in-line with the steering wheel.

Ioniq and Prius, both are equipped with state of the art advanced safety features. Hyundai Ioniq has as many as 7 SRS airbags including one for the driver and one for the passenger. The rest of them are installed at the front thorax, curtain and driver’s knee. In case of any collision, all of them inflate and save the passengers from serious injuries. Moreover, the car also features an anti-lock braking system (ABS), ESC and HAC technology for an improved driving and braking experience. Both, the front and rear wheels feature disc brakes. There is also a back view camera that displays when the drivers shift the transmission to reverse mode. For additional safety of the car, Hyundai has provided with an engine immobilizer feature to avoid theft and trigger the security alarm in case of unauthorized entry. Furthermore, the parking sensor allows the driver to park in tight spaces with much ease. 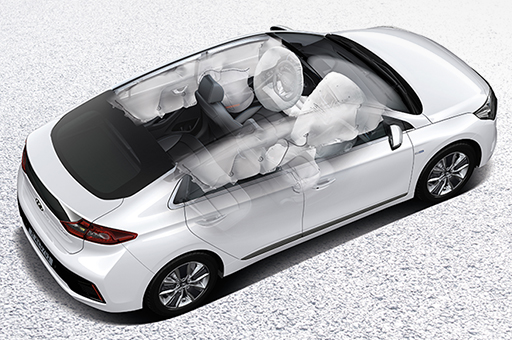 Toyota, too, has provided the best safety features in their luxury sedan to ensure a safe driving experience. There are 6 airbags deployed which help in minimizing the impact on collision. The anti-lock braking system is present in the vehicle with disc brakes at both front and rear wheels. It also integrates an electric power steering coupled with traction control feature to provide excellent stability. Engine immobilizer feature is also active to ensure only authorized entry in the car. The parallel parking is made easier with the help of moving grid-line reverse camera functionality. It is also built under a crash safety body structure that absorbs maximum impact in case of a collision.

Both the premium class models of the two auto giants are equally safe in terms of the safety features provided.

Hyundai Ioniq has been priced at PKR.6.5 million. On the other hand, the Toyota Prius comes at an ex-factory price of Rs.8,370,000.

Overall, Hyundai Ioniq is a wonderful addition to the line-up of the new entrant in the local automobile industry of Pakistan. Note here that the company had previously launched its compact SUV Santa Fe and Grand Starex in Pakistan as well.

Stay connected with PakWheels for updates on the latest automobile launches in Pakistan.