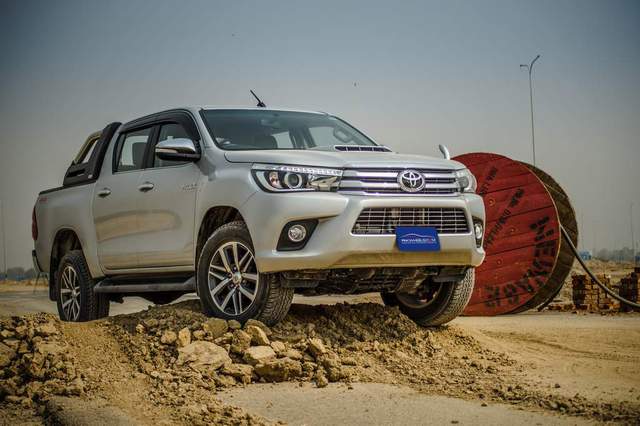 Does the absence of VSC in PKDM Hilux Revo spell trouble for consumers?

On 6th December 2016, Toyota Indus introduced the highly anticipated Hilux Revo, dubbed as the King of Pakistan in many circles; the new vehicle was aimed to take the market by storm. The company, as per the stats released by PAMA, have sold 2,976 units of Toyota Hilux from Jan-May 2017, 42.6% increase for Hilux from the same period of last year. Add in the wait time of six to seven months and a premium of five to six lac, the Hilux Revo can be safely called a successful vehicle. So you might be wondering, what seems to be the issue? The answer, in essence, lies in the safety features or lack of thereof in this vehicle. Yes, Toyota Indus is offering Anti-lock Brake System (ABS), Electronic Brake Distribution (EBD) and Brake Assist (BA) but what about the Vehicle Stability Control (VSC), which is being considered as a paramount safety feature to prevent sideways skidding in an event of sudden manoeuvring/braking at high-speeds to avoid an obstacle. Many of you might be wondering isn’t ABS, Traction Control or EBD supposed to achieve the same results? Technically speaking, the answer is no. Because all these safety electronics overlap so much that understanding them from cursory reading isn’t enough. The good news is that you don’t have to understand it to benefit from it; the bad news is that a lot of cars don’t come with them in Pakistan. So, following is my take on explaining what ABS, Traction Control, EBD, VSC and Brake Assist.

What & how important is Moose test?
Now that we have discussed the application of safety systems, it is now time to come back to the topic at hand. The lack of VSA means PKDM Toyota Hilux Revo is prone to losing control on evasive maneuvers. The alarming thing is that the vehicle in question comes standard with VSA across many countries including Thailand, America etc and yet it failed to pass the Moose Test.
Here is the video of first Moose Test of Hilux Revo conducted by Teknikens Värld:

The Moose Test is an evasive maneuver test designed to determine how well a certain vehicle evades a suddenly appearing obstacle. And by the looks of it, Hilux Revo failed this test. Toyota, however, revised their VSA system to improve it, here is the second video of their test.

The vehicle did pass this Moose Test, but the irony of the absence of VSA in PKDM Hilux remains glaring. 4×4 vehicles have a higher center of gravity and thus are more likely to flip over in any fast evasive maneuvering due to a high center of gravity and less aerodynamic physical appearance. Thus, full fledge 4×4 vehicles are relatively expensive because of the gadgetry, safety systems and overall cost of production is higher than sedans or two wheel drive vehicles. As pointed out earlier, Toyota Hilux has a wait time of 6-7 months, a premium of 6-7 lac and an ex-factory price of 4,299,000 rupees and still miss out on a fundamental feature like Vehicle Stability Control is disappointing, to say the least. It goes on to show how far behind Pakistani Automotive Industry is then a lot of countries across the world and immediate neighborhood. This trend is not just limited to Hilux Revo, any observant can list down a lot of vehicles that are being sold in Pakistan, which are globally obsolete or lack the most basic of safety equipment such as airbags etc. The point of this article is not to demean anyone, rather it is aimed to highlight the glaring fact of the options that Pakistanis receive for the money they spend on commodities like vehicles. The need for a local automotive standard authority is required more than ever in this day & age to design, strengthen and uphold driver and passenger safety standards in Pakistan. Last but not the least, I will leave you with a question; If the (International) variant of Hilux Revo equipped with VSC fails to complete the Moose Test on its first try then what hope does the PKDM Hilux Revo has to pass this test?