The effect street racing had on my colony

Let me begin this article by saying that I love racing, I follow racing related stuff wherever I can, be it playing Need For Speed Video games, watching Fast and furious movies or Formula One, etc . I believe in racing where it should be done; on tracks dedicated for this purpose with proper facilities available like safety and medical. The problem starts when our nation applies these things on our roads, forgetting the difference between a movie and reality. Racing may look very glamorous and exciting in TV/Movie but in reality, without proper controls and safeguards, it is a disaster waiting to happen. Of all the harmful effects it can cause, let me tell some of the effects it has had on my colony, which is as follows.

I live in a Government colony in Lahore, near to Mall Road. It is a peaceful neighborhood with about 70 homes and inhabited by decent people, all government officers. And being salaried people, no one owns a sports car. Yet in the past, my colony was a hub for racing of all sorts. Why? Because it had a 1.25 km stretch of double road, mostly without any traffic as illustrated below: 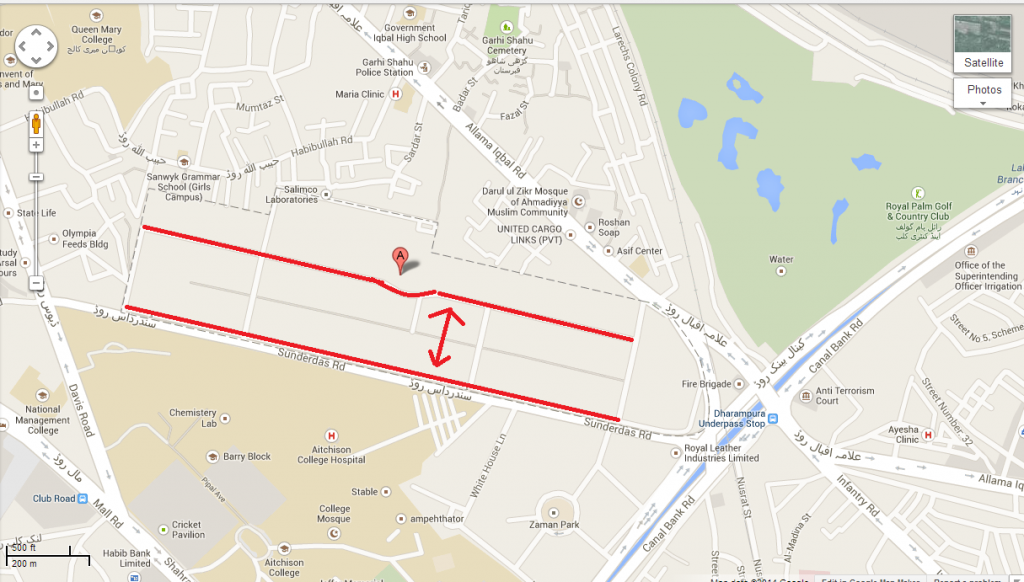 This thing, coupled with almost negligible traffic at night, made it a perfect place for drag/sprint races. You could hear cars racing by your home with a loud engine noise, courtesy modified exhaust tips (or fart cannons). At times, the noise would be so deafening that people would have difficulty sleeping in their homes. Some household pets fell victim to these cars because they couldn’t get away in time, or their eyesight got dazed by extremely bright HIDS. Some people even tried to follow these racers, but how can an ordinary car catch up to the cars having many times more horse power than theirs. Thankfully though, no accident involving a person took place, for which I thank the racers (Sarcasm). 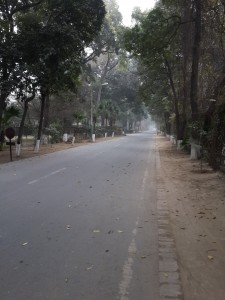 A Short term solution came. Guards at each entry point of the colony started to check cars and ask drivers for their purpose of entry. This proved to be a success for a while because it was easier to spot lets says a 350Z or a RX-8 or even a heavy bike because no one in my colony owned it. The guards asked the driver his destination and could even verify from that home by land line, denying him entry. But this success story stayed with us for a short while as the racers improvised; now racing began on seemingly ordinary cars. The guards could spot a dedicated sports car, But how could they check a civic that seemed like a normal car from the outside, but had tons of modification under the hood? Or even no modification at all, how could they just check the will of the driver? Two cars could be going normally, and if no police was around, they would start a race within seconds.

With this, another chapter of street racing began in my colony. Once again you could hear cars rushing past your home late into the night.  Now with street racing again raging in my colony, following effects among many were observed:

1.       Damage to the roads. Painted road markings disappeared due to the burning rubber.

2.       Pollution increased with the racers and their supporters littering around the roads during and at racing locations.

3.       Vandalism increased, courtesy of the supporters that came with the racers.

4.       Accident rate from practically zero went increased a lot. There were frequent vehicle crashes, with damage to trees and property.

5.       Other issues such as teasing/hooting of people walking/jogging. 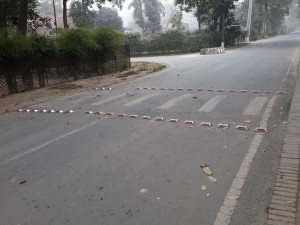 To stop all this, stringent measures were applied, much to the dismay of the residents. Speed breakers with LARGE cat eyes/reflectors were constructed after every short interval of the road. The cat eyes were so big that even a car passing at 10 km/h would feel a huge jump and it would be impossible to cross a speeding car over them. With this the chapter of Racing closed in my colony and now I should thank the racers for the bumps our cars get when coming home. The damage they (may) cause to the vehicle shock and suspension is complimentary. This would not have been achieved without your support. I hope you all are happy.

Summing up, my message to these wanna-be racers would be; please value your life and don’t street race. Even Paul walker couldn’t have anticipate his death coming this way and so can’t you people. Please drive safe and avoid racing, especially in residential areas. If you can afford racing, then all of you can definitely afford to have a dedicated track made for this purpose. You see and hear about countless car crashes, cars losing control and people dying. Don’t let the next news cover you. Drive like normal people. Ensure safety of yourself and others.

Fuel injection systems and how to maintain them