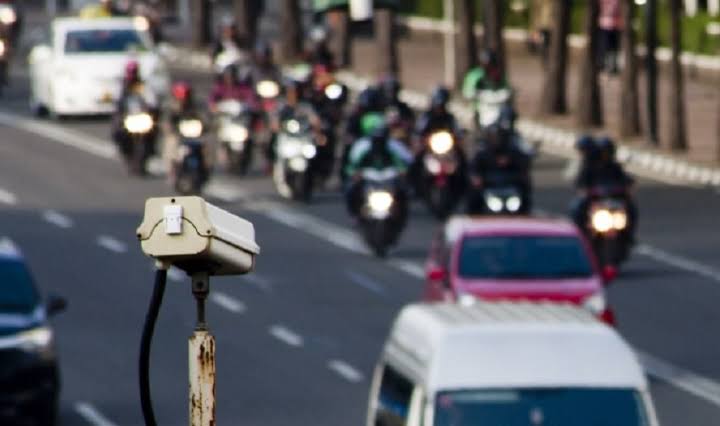 The federal government of Pakistan has made a number of amendments in the Twelfth Schedule of the National Highways Safety Ordinance 2000 that has revised the fines for traffic rules violations across the country. 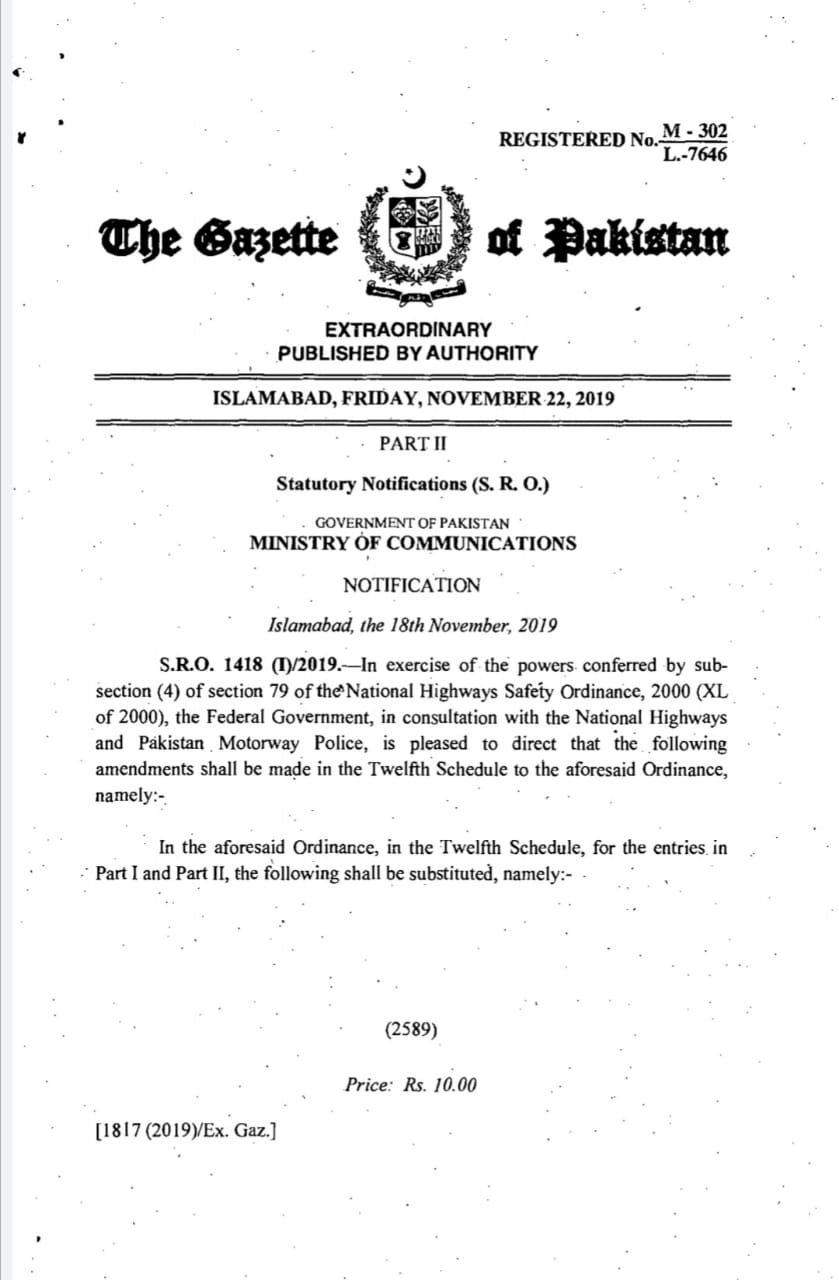 According to credible sources, the revised rates of these traffic violations will come into effect from the start of the next year. However, the official notification for the revised rates has been issued by the Ministry of Communications dated 18th November 2019. The new rates are divided into two sections, i.e. moving violations and parking violations. It is pertinent to mention here that these rates will be implemented across the country that includes all the national highways and motorways networks as well.

The common traffic rules violations include exceeding the speed limit, observing traffic signals, prohibited overtaking, u-turn violation, using a mobile phone while driving, wearing a seat belt, driving without a license, one-wheeling, and wrong parking. All these fines are increased by a hefty amount, and the government aims to implement all the traffic rules for the safety of the commuters.

The citizens will also need to follow the overtaking rules; otherwise, all the violators on a motorbike, car, and LTV will be charged with 1500, whereas HTV and PSV will be fined Rs.3000.

The absence of side mirrors in motorbikes is a very common violation in the country, which will be fined by Rs.500. Also, one-wheeling is a traffic offense that will be fined Rs.5000. Driving a vehicle without fastening the seat belt or its absence in the vehicle will also cost the commuters by Rs.1500 for cars and other LTVs.

Another common violation on our roads is the use of mobile phones while riding a motorbike or driving a car. This type of offense will result in a fine of Rs.500 for a motorbike or a car, Rs.2000 for LTV’s and Rs.5000 for HTV’s. The complete list of revised moving violations, as mentioned in the notification is given below: 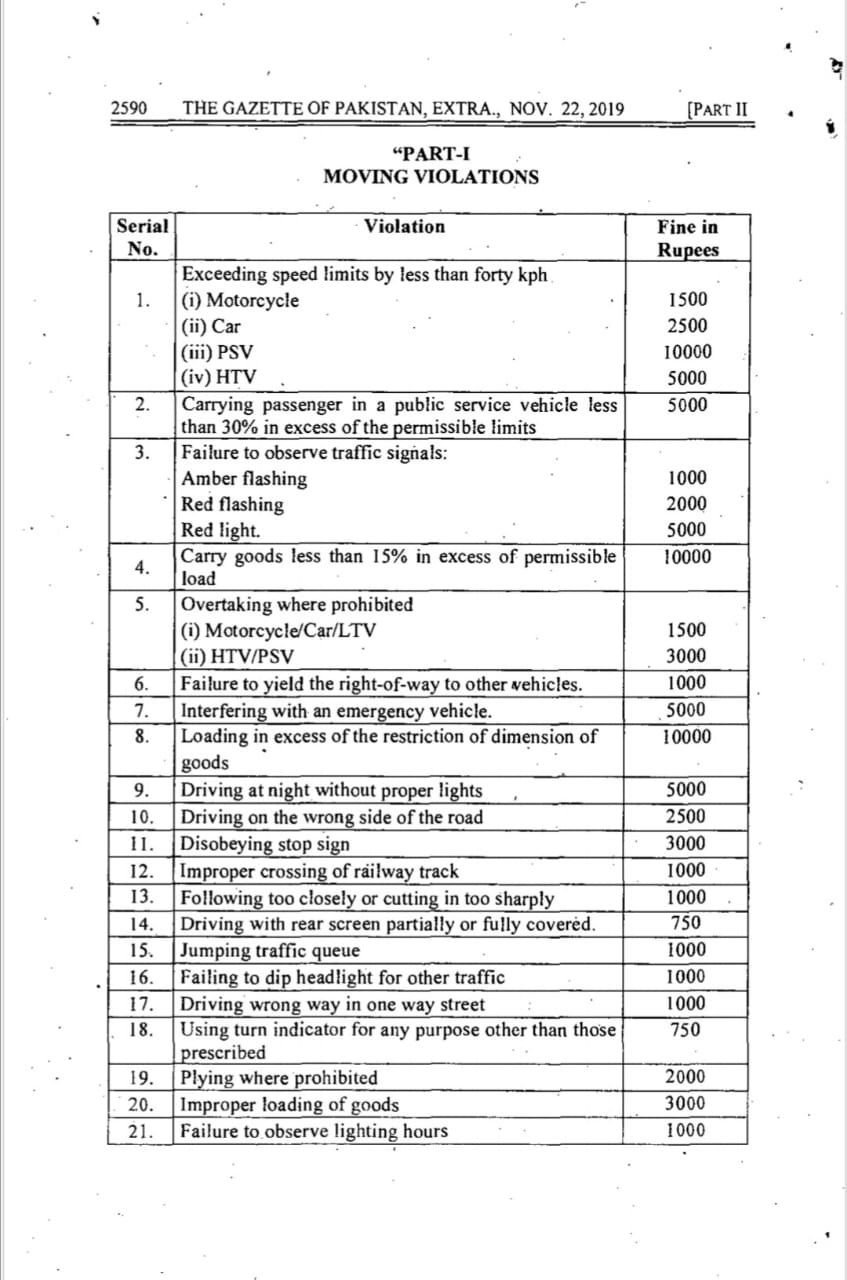 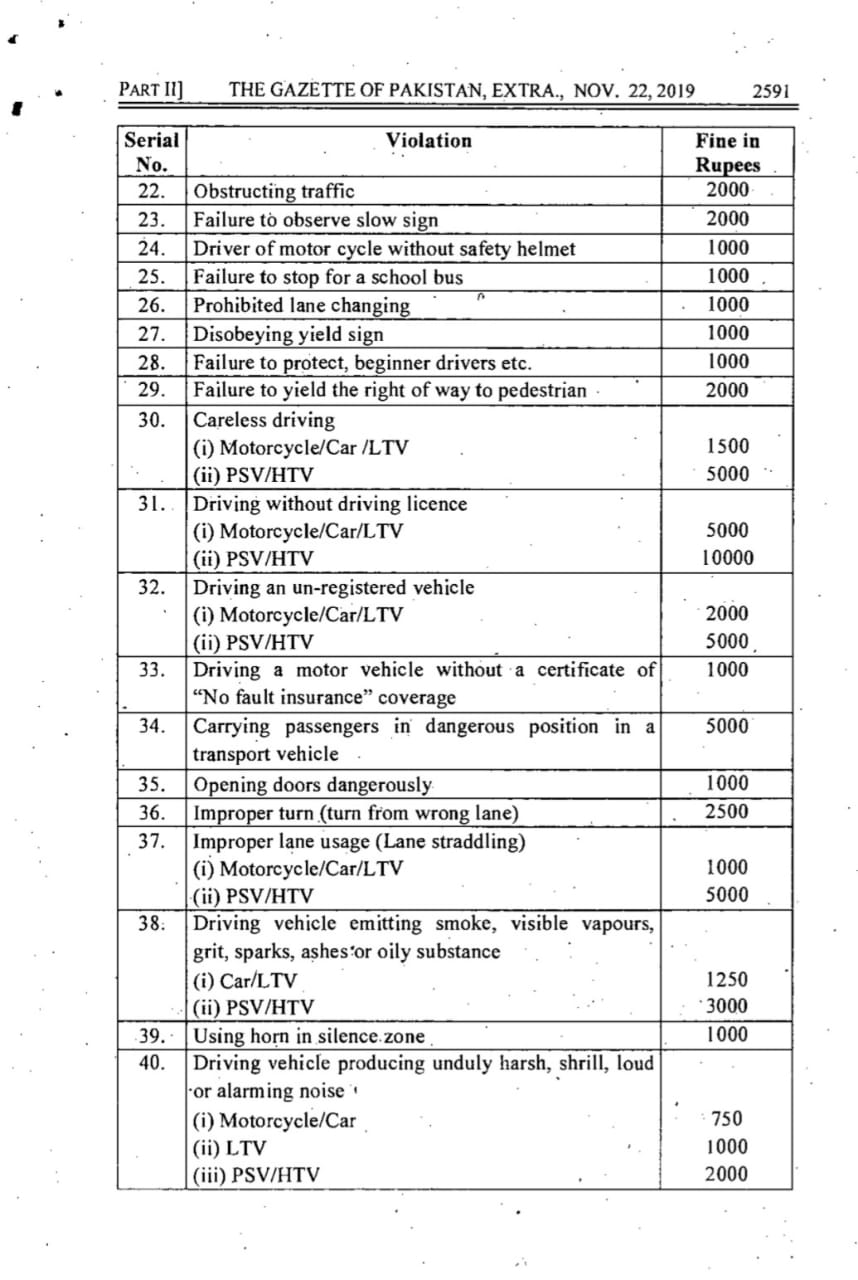 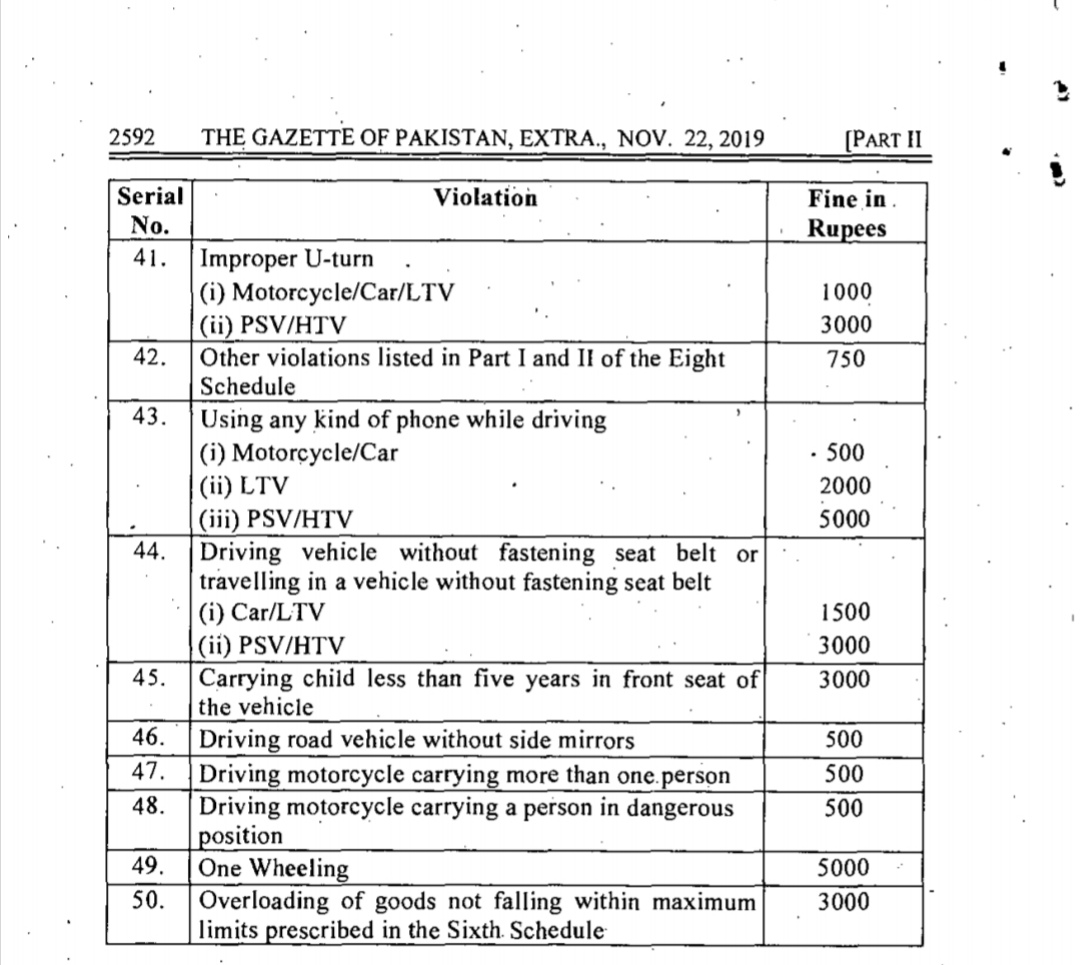 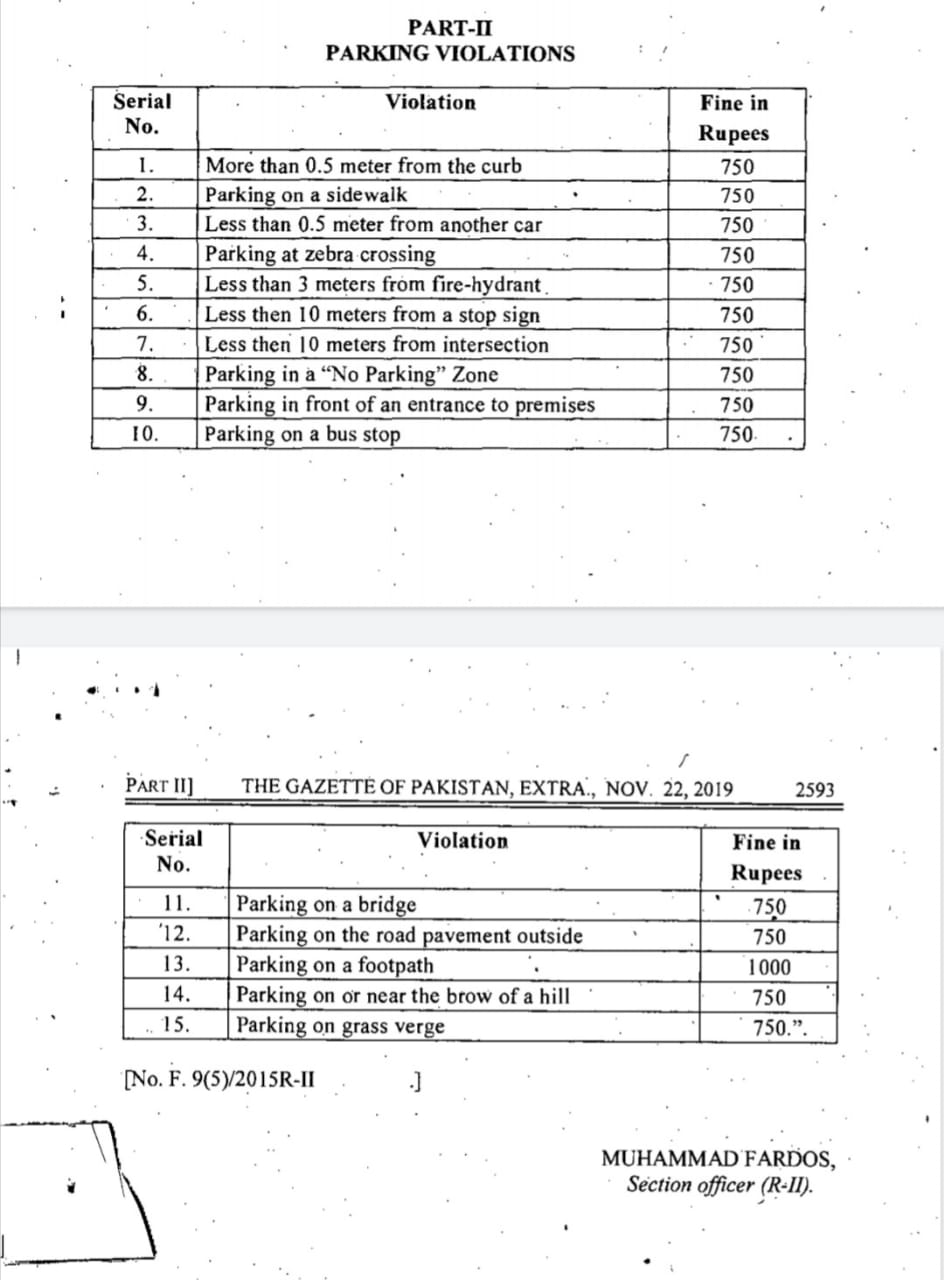 Share your thoughts on the revised rates of traffic violations in the comments space below and stay with PakWheels for more updates.

Pak Suzuki might Build A Second Manufacturing Plant In Karachi

OGRA recommends a decrease in petroleum prices for December 2019