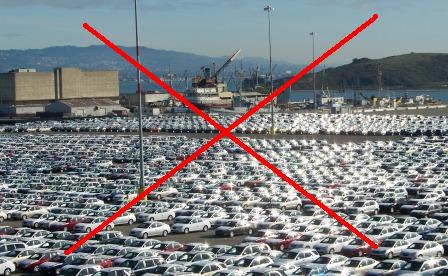 Government Revokes The Decision Of Age Increase For Importing Cars

Perhaps we all aren’t as surprised as we should have been under the rule of a competent government. Although the decision itself was of no good for us in the long run but however, it was the light for the public and analysts to argue that Government was interested to break the Auto-mafia but as it came out, to be one of the greatest illusion witnessed by Pakistanis – its there then its not there.

Downward trend in car prices was observed as the news broke out in the market but this trend will also revoke shooting prices of cars through the sky. There was a time when within 3 lac rupee you had options, today, there’s no way I can upgrade without adding couple of lacs in my budget to upgrade.

Pakistan’s predicament economy has raised the prices; there are no customers in the market, forex prices are sky-high and with that said, few companies consistently play with premiums by controlling demand and supply. A company went the farthest by collecting advances from customers’ up to 17 billion rupees for their personal uses. Instead of charging the company for fraud, the ministry of industries had a cat-fight; it allowed used-car imports.

The “Big Three” local auto-assemblers which consist of PakSuzuki, Indus Motors & Atlas Honda increased prices by 33-78%, 33-68% and 21-54% respectively. All of them owed the price increase to the awful dollar-rupee and yen-rupee parity. Such a shame that even today Pakistan is not able to produce the simple yet outdated Mehran all by itself.

It is imperative from me to not mention a quote from the article written by Zafar Hilaly for The News;

Some would call it double dealing or hypocrisy, but let’s just call it pretending. That way it becomes less emotive and more palatable. Why do we pretend as much as we do when in the end we end up fooling no one but ourselves? Worse, the pretence of yesterday becomes the facts of the next day when those acting the charade are not around to confirm that what was being reported as genuine was merely posturing, and actually a hoax. It’s important because if the past never really happened, how can it form the basis of formulating present policy? After all, the past is not just a package that you can lay away, and, besides, if we do not really know the past, how can we understand the present?

The pressure from the majority is over-shadowed by the powerful handfuls hence none of what you hear shall you embrace.

Even though it is too early to say but I am further saddened to tell you that in 1995, Benazir Bhutto sent Asif Ali Zardari to South Korea and he returned with dozens of MoUs worth several billion dollars. So today’s deals with the Chinese are no different, will we see the rise of the Chinese auto-makers and fall of the big-three in Pakistan? I don’t know and I don’t care as I’d rather choose to cling on to my hope which is my wish as well that one day we will have a policy that allows a Pakistani to make one car and register it as his brand, this is the solution and will be my democratic revenge on the auto-mafia as many of us would prefer to see the supercar by the name of Basheer 458 Pakistani rather Ferrari 458 Italia because Pakistan is my identity just as Ferrari is Italy’s but for now, go through Mr. Zafar Hilaly’s piece on, ’false hope about Chinese visit’.

The Risky Business Of Innovation

Follow These Tips If You Want To Drive Safe