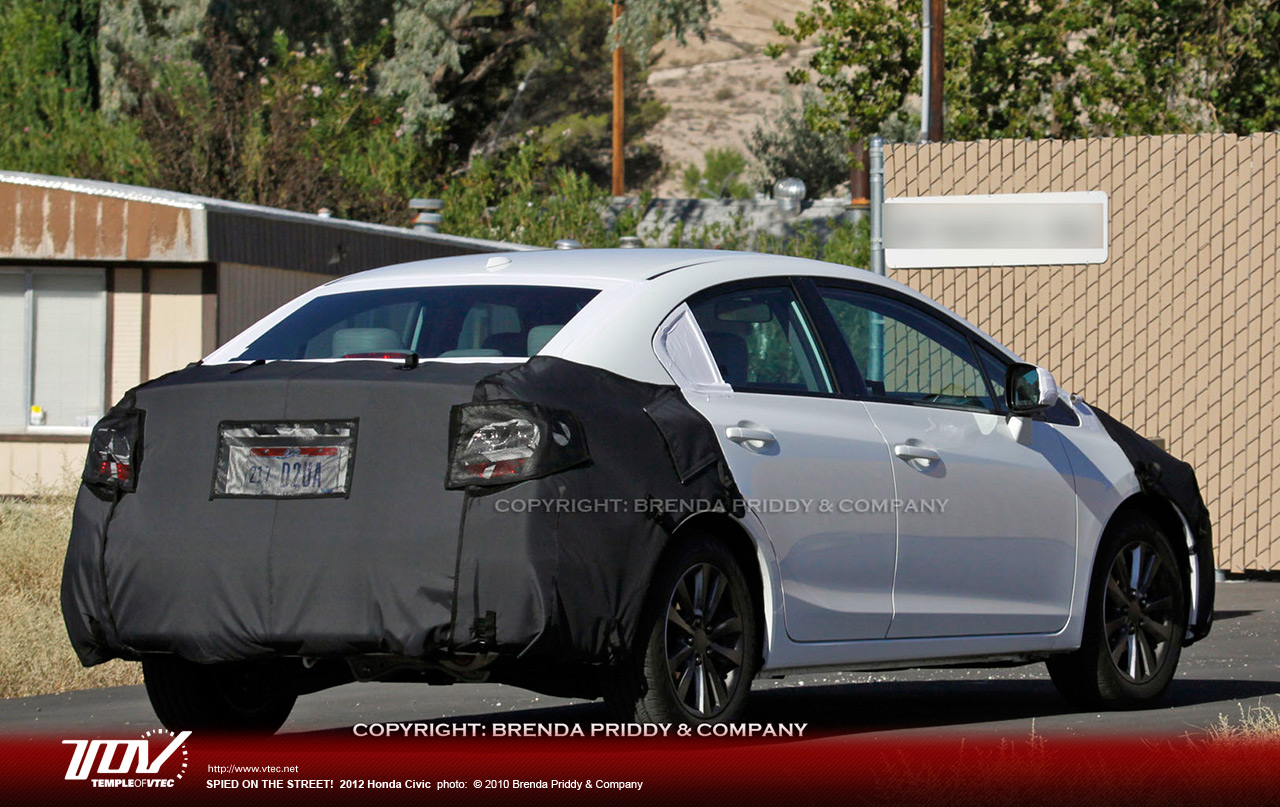 Honda Civic 2012 – Our take on the next generation Civic

The 9th generation Civic is right around the corner, and its’ gotten lots of paparazzi-style publicity recently. The Temple of VTEC has been quick to catch the upcoming Civic with its clothes on.

Expected to hit the USDM market by summer 2011 as a 2012 model, the new Civic builds upon the success of its predecessor. The USDM will be the first to get the 9th generation Civic followed by the Asian and Euro markets.

For USDM, the car has mostly gotten its styling in Canada and USA suitable for the local taste with square looking cuts instead of the more feminine nose clips which dominate the JDM derived models (Euro and Asian submarkets).

The Japanese Domestic model, which will also be the basis for the Asian and European market will get most of its styling from Japan and Thailand, as has been the case in the past. Thailand’s design team plays a major role in the development of Honda Civics and Citys for the Asian market.

The 8th generation Honda Civic at the time of launch was criticized for its unusual shape and space-ship inspired interior design. A short nose, with a short deeply slanted windshield dominated the design.
One of the most controversial aspects of the 8th generation Civic was the multiplex instrument cluster design with the digital speedometer. Most people who reviewed the car or own the car, either love or hate this particular design. And most people who’ve owned this particular car can’t adjust to any other dashboard design except the multiplex thanks to its ergonomic design.

The 9th generation Civic is closely based on the same platform and retains a lot of its predecessor’s attributes:

From what is obvious at this point, the new Civic gets the following revisions:

– The front fender quarter glass has been replaced by plastic, which is either camouflage or a design change, most likely, the latter.

– The OSRVMs (outside rear view mirrors) have been revised and are reminiscent of the new Honda City.

– The C pillars have been redesigned and the car has a wider and higher rear stance.

– The multiplex meters get some interesting new features (from what we could make out from the spy shots):

– The dashboard is very driver centric, it really looks like a “diver’s machine” now.

– The dashboard appears to have been resized slightly to “cure” the reflection issue it has had in the past.

There are some speculations at this point coming forth from reliable sources that the Civic’s power plant will get bumped to a 2.0L from 1.8L, possibly a revised R20A engine? And a long overdue 2.4L bump for the Civic Si model (the funky twin of the sober Civic). The good news is that given all the refocus that Honda has been going through, they have not killed off the sporty Si (and hopefully the JDM Type-R).

One refreshing change appears to be standard 17″ alloy wheels on the sedan model. While there are no closeups of this, it does indeed appear to be so. The car also seems to be sporting LED tail lights this time around.

The Civic remains Hondas best-seller the world over and we can only wait to see the final product, and it looks like it will be hitting the roads very soon. We can only wait until the final release to give you a full review of the model.

If Pakistan can make a jet fighter, then dude, where’s my car?