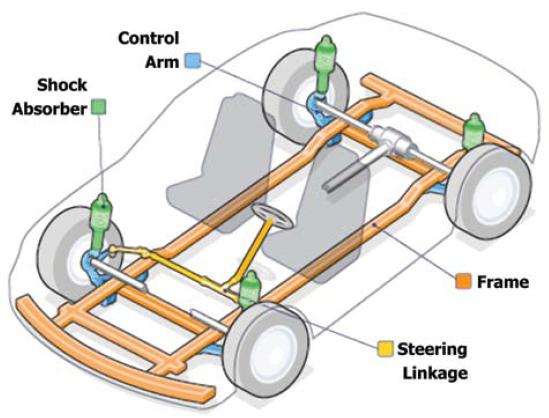 In olden days the passenger wagons used leather straps to sling the carriage body so as to avoid bumps and jerks in the road. Since the carriage body in this way was almost detached and suspended from the chassis, the process came to be known as ‘Suspension’. After
this came the semi-elliptical cart springs, which readily replaced the leather-strap suspension. Commonly used on wagons, buggies and carriages, the cart springs were often used on the front and rear
axles. But this too could not solve the problem of forward and  backward sway, until the powered vehicles hit the road at the close of sixteenth century.

The car suspension enables the driver to control the car; provides steering stability with good handling and ensures the comfort of the passengers. In this article, we shall explain the car suspension; how it works, and what bearing it has on the overall control and handling of your car. It is already known through a scientific principle that the car wheel experiences a vertical acceleration whenever it passes over a bump and all of wheel’s vertical energy is transferred to the frame, which moves in the same direction. In such a situation, the wheels can lose contact with the road completely. Then, under the downward force of gravity, the wheels can slam back into the road
surface. What you need is a system that will absorb the energy of the vertically accelerated wheel, allowing the frame and body to ride undisturbed while the wheels follow bumps in the road.
The forces at work on a moving car, also called vehicle dynamics, needs to be studied first in order to understand the importance of a suspension system in an automobile vehicle. Most scientists consider the dynamics of a moving car from two perspectives i.e. The Ride & The Handling. The former is a car’s ability smooth out bumpy roads while the latter is a car’s capability to accelerate, brake and corner safely.

The chassis comprises all the important systems located beneath the car’s body.

These systems include:
The Frame
The Suspension System
The Steering System
The Wheels
The Tires

From among these systems as above, the suspension system is considered the most important of all. The three basic components of any suspension are:

There are four basic types of springs:

1. Coil springs – These are the heavyduty coiled springs around an axis. Coil springs compress and expand to absorb the motion of the wheels.

2. Leaf springs – This type of spring consists of several layers or leaves of metal bound together to act as a single unit. Leaf springs were first used on horse-drawn carriages and were found on most modern automobiles until 1985. They are still used today on most
trucks and heavy-duty vehicles.

3. Torsion bars – Torsion bars use the twisting properties of a steel bar to provide coil-spring-like force. One end of a bar is attached to the vehicle frame and the other to a wishbone. When the wheel hits a bump, vertical motion is transferred to the wishbone through
the levering action, to the torsion bar. The torsion bar then twists along its axis to provide the spring force.

4. Air springs – Air springs, which consist of a cylindrical chamber of air positioned between the wheel and the car’s body, use the compressed air medium to absorb wheel vibrations so as to provide a smooth ride.

Springs, which are located between the wheels and the frame on a car, are simple devices and engineers found out that springs alone are insufficient to handle car’s complex matters or provide a super comfortable ride to passengers. Springs are good enough for absorbing energy but not so good as to dissipate it. Therefore there arose a need of other structures like dampers for dissipating  energy.

A suspension built on springs alone would continue to cause bouncy ride and uncontrollable car conditions unless a dampening structure is added to a car spring so as to absorb excessive energy released from a bump. The dampers also called shock absorbers control unwanted spring motion through a process known as dampening.
The function of shock absorbers can best be understood by a scientific explanation. Shock absorbers reduce the magnitude of vibratory force when they convert the kinetic energy of the suspension movement into heat energy, which is then dissipated, with the help of hydraulic fluid present within the dampers. A shock absorber is basically an oil pump, which is fixed between the frame
and the wheels of a car with its upper end connected to the frame and the lower mount fixed to the axle next to wheels.

When car experiences a bump in the road, the spring begins to coil and uncoil. The energy of the spring gets transferred to the shock absorber through the upper mount, and down through the piston rod into the piston. Orifices perforate the piston and allow fluid to leak through as the piston moves up and down in the pressure
tube. Because the orifices are relatively tiny, only a small amount of fluid, under great pressure, passes through. This slows down the piston, which in turn slows down the spring.

All the factory fitted shock absorbers in modern cars today are velocity-sensitive. The faster the suspension moves, the more resisting force the shock absorbers provide. This enables shocks to adjust to road conditions and to control all of the uncomfortable jerks and movements that occur in a moving vehicle especially on
an off-road rugged terrain or a bumpy road.

Anti-sway bars or Anti-roll Bars functions along with shock absorbers or struts to give additional stability to a moving vehicle and a structural support for its suspension. The strut, also a dampening structure like a shock absorber, is mounted inside a coil spring and delivers a bit more resisting force than the shock absorber itself. The shock absorber only controls the speed at which weight is transferred in a car but cannot withstand vehicles weight whereas the strut, in addition to this function also supports vehicle weight.

Anti-sway Bar, which like shock absorbers and struts is considered critical safety feature, is a metal rod that spans the entire axle and very effectively and firmly joins together each side of the  suspension. Anti-sway Bars thus worn allow excessive weight transfer from front to back and side to side.