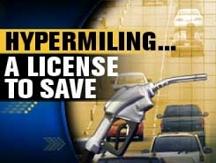 So basically ever since I posted the snaps/videos of getting 22.8 Kilometers/L and then 23.6 KPL I really think its time to share some of the driving habits I carry with me and see how we can all get the best mileage we can get from our cars and save a lot of fuel and money.

How much savings are we looking at?

Some people may think that the money we’ll save this way is so less that its almost irrelevant. It’s actually just the opposite. You can save yourself up to 50,000 Rupees a year if you’re a good hypermiler (that’s like buying a CNG kit every year!).

If you’re really good, you can get Petrol mileage which costs you even less as compared to CNG.

There are hypermiling contests that take place in the west. People who win that contest have got up to 106 Miles per gallon (45 Kilometers per liter!!) at the end of the contest.

Some hypermilers in their daily routine get up to 21 Kilometers per liter in Honda Accord (I have a video of a person who gets this average that I will share) – that’s twice of what Honda Promises.

My experience of Hypermiling is only with Petrol. But I am almost 60% sure that all these techniques do apply to CNG as well. So yes, you can also get phenomenal fuel averages regardless of which fuel you are running.

Modify yourself, not your car

As a hypermiler you must understand that there isn’t alot you can do with your car that will save fuel, besides removing some useless load from it and checking tire pressure. The actual modification is in your own driving habbit, I’ll explain what I mean by this below:

How we do it

If you have a ‘real time fuel consumption graph’ you will see that the most fuel is burnt when you are accelerating. In Honda City and the new XLi/GLi these things come in built from the factory (you can suggest more cars if you have in mind and I will add them in the list which do have these small gadgets). For a hypermiler these are a ‘must have’ If your car didn’t come with one, you can purchase one that plugs into the OBD port and gives you the mileage you’re getting.

Alternately you can carry 2 – 3 liters of petrol in a bottle and calculate average by emptying the tank.

1. Manual Transmission is the best

If you’re going to Hypermile, you will want to try doing this preferably on a manual transmission car, one with a clutch. Manuals will get you a better average as compared to an automatic one.

The basic idea is to drive calm, less aggressive. If you’re going to accelerate, do it slowly. I personally shift gears on 2000 RPM. Accelerating “too slowly” could also hurt your gas mileage. So I think the ideal revs to shift would be 2000.

In an Automatic car, you should try to maintain RPM at 2000 and leave the rest on the car.

You guys must have heard about ‘gliding.’ Gliding is something when the aeroplanes are flying but their engine’s aren’t working, or perhaps they don’t have one.

In cars, this phenomenon is called “coasting.” In an M/T car (Manual Transmission) you can put the car in neutral when you do not want to accelerate and that would be coasting for you.

This really explains the fuel saving in car. Think as if you’re on a bicycle. If you have to immediately go from zero to 20 kilometers per hour in a bicycle, you know that you will get tired very quickly because you’ll have to give a lot of energy to it, so think of “energy” as “fuel” when thinking about car.

But if you have to go from zero to 20 in, say, 10 minutes? You will reach that speed and still be fresh (meaning you will have lost lesser energy and reached that speed too).

That’s the same way it is with cars. If you’re going to accelerate and do it slowly, you will save fuel and energy and still reach a particular speed.

When the car is ‘coasting’ and you hit brake, you are actually loosing all the potential energy that your car has which is later going to cost you fuel when you want it back.

6. Looking as far as you can

As a hypermiler, you’re going to want to look as far ahead on the road as you can. If you can see a red light at about 400 meters from you, you don’t have to race to that point and then abruptly hit brake. In Pakistan, a lot of times there are road blocks, what most people do is that they hit brake and stop one inch before the blocks (which reduces the probability of clearing of the road block).

If you can see you’re going to have to stop in about 500 meters, what you do is put the car in neutral and let it coast all the way for you. When the car is in neutral and its coasting/gliding, the average you’re getting is about 50 – 60 kilometers per liter. This puts a big impact on the overall average of your car.

I do this every time I reach a toll plaza on the motor way. People sometimes pass me at high speeds and then brake hard right in front of the lane. Since I am slow, I get the chance to choose the lane that has the least amount of traffic in it.

Lets us see if this speed really wastes a lot of time.

The distance from the Peshawar toll plaza to Rawalpindi toll plaza is about 151 Kilometers. If you’re driving on 120, you’ll get an average of 16 KM/L. Basically there is a huge drop in average as soon as you go above 105 KM/H (I don’t know why).

If you travel the same distance in 100 Kilometers/H the difference would be:

So there is just a psychological effect in driving slow. People may over take you a lot of times and you may feel “Arrrggg!!” in the begging, but this feeling ends up as soon as you see the savings you’re making. I personally have started feeling uneasy with 120 Km/h. I feel the most comfortable when I am at 90.

As I wrote, its all about changing ‘driving’ habits. This is one of them.

Slower speeds are much safer. You’re almost completely in control of your car. Above 120, you really don’t know what you’re doing. If anything comes in front of you, even with ABS its going to take a while for the car to stop. At 90, it will be much more safe and easy to drive.

Driving below speed limit also saves you from getting a chalan on the motorway. And best of all, its ‘Good for the Engine.” Making your engine cry on every trip probably will cost its life at the end of 200,000 Kilometers. But going slow really gives the time for the engine to breath and not over heat etc.

The theory is that the less you push it, the happier it will be.

8. You don’t have to necessarily turn off the AC

If the weather is not that bad, cloudy, or you’re driving at early morning or evening, I think it is not difficult to drive without AC. Turning on the fan and setting it to fresh air mode should do it for you.

But if you’re driving in the middle of the day, you shouldn’t turn off the AC. It does consume fuel but hypermiling is also about remaining as practical as one can be.

What I personally do is that I put the fan speed to 4 for the first 10 minutes, and then immediately put it to 1 with AC on. When the fan is on 1x, it makes the AC trip a lot more often as compared to higher fan speeds. This keeps the temperature of the car reasonable and you can go ahead with the hypermiling as well.

Remember it is always the best to close the windows and open it only when it is absolutely necessary. Turn on the AC if you want cold air or use the fan in the fresh air mode. Opening the windows increases drag that you would really want to reduce.

Sometimes there is some luggage inside your trunk that you haven’t noticed. Its always the best to remove all the unnecessary stuff from the car.

Also remember that if you’ve got yourself a CNG kit, you should try hypermiling WITH CNG and not with Petrol because the cylinder that you have in the trunk is ‘heavy’ and you’re not really going to save alot with that thing still inside the car.

10. Use factory settings for your car

The more you modify your car, the more fuel you loose. Putting huge alloys, useless air intake and air filters, spoilers etc. All of these things will hurt your fuel average. Try your best to leave the car on factory settings for the longest possible time.

My car has 100% factory tires with factory rims. I haven’t got it tuned from any one besides changing the oil etc. I didn’t let any body touch any setting in the engine.

Air filter specifically helps. Although when I got 22.8 KPL I had not changed any of these things in the past 5000 kilometers. But when I did, I got 23.6 KPL. So surely these things help. Make sure you change Air filter every 6 months. It does not hurt the savings. On petrol its normal to change Engine oil/air filter after 6000 kilometers. Don’t be miser about putting the best Engine oil out there.

Another thing you would want to do is maintain the momentum. This is very important and effects about 30% of your fuel efficency. Accelerating and decelerating again and again is a very bad habit of driving. Try to maintain a particular speed for the longest possible time. Again consider cycling. If you’re on 20 KM/H on cycling, you’re hardly pushing the pedals but the cycle is going at a nice speed. Same goes for cars, they will drink very less fuel and save a lot of money for you.

14. Some extreme hypermiling techniques that I don’t recommend:

Some crazy hypermilers go to extreme with saving fuel and do a few things that are not advisable to everyone. Only the most experienced people should practice these.

These include putting more air in your tires than usual. This reduces the drag on the tire.

Drafting behind bigger trucks; some trucks on the motor way are going at 100 KPH. Drafting behind them does safe fuel. When you drive behind them, the resistance of the air that your car faces when there is no one in front of it is gone because the truck is facing the major air resistance and you’re car will have to put less effort to drive.

Thirdly, some extreme hypermilers turn off the engine when they are going on a down stream. Obviously when the car is off and you’re going down stream, you are getting infinite kilometers per liter. But this is not at all recommended by me as our old cars have postal brakes. May be you guys could do some research on this on your own.

Some people even remove the spare tire to reduce weight, again this is one of the extreme steps.