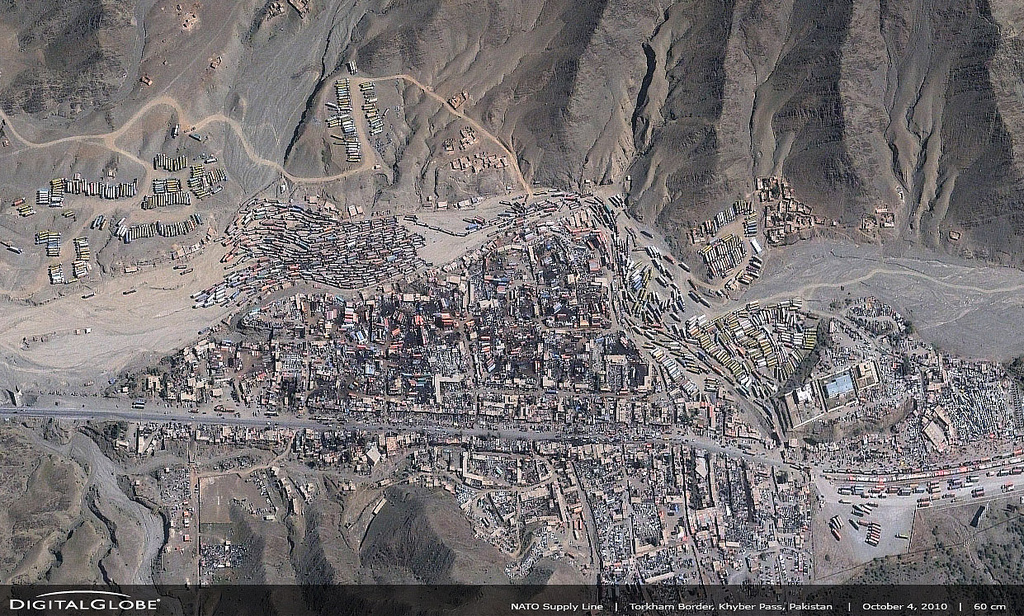 How Pakistan controls the US operations in Afghanistan

The 10-day border blockade of the Torkham border after NATO-Helicopter killed three Pakistani Soldiers may have ended but it has given the US Military a hard thought about who is in control.

Much of us are of the notion that Pakistani Government is a puppet of America, I won’t dig into that because its a rather fictitious claim, but I’d sure tell you the other part of the story about the fact that we are in control of the American operations in Afghanistan, on our finger tips, and that’s a fact, for now atleast.

The following photo was taken by Digital Globe Satellite which shows the US-NATO supply piling up at Torkham border and also shows Pakistan’s ability to stop the US Military in their tracks;

The Torkham border is used to supply around 50% of non-lethal resources to the US Military’s war against terror in Afghanistan and Pakistan. The idling convoys stretches over to 3-miles on the border as the following video shows;

The Pakistan-Afghan route is the most shortest and economical route for the US-NATO supplies however, The news reports that the Americans are trying to secure three different routes;

According to Islamabad-based diplomatic circles, the Americans are now trying to secure three different alternative supply routes for Afghanistan. The first one is the northern route, which starts in the Latvian port of Riga, the largest all-weather harbour on the Baltic Sea, where container ships offload their cargo onto Russian trains. The shipments roll south through Russia, then southeast around the Caspian Sea through Kazakhstan and finally south through Uzbekistan until they cross the frontier into north Afghanistan. The Russian train-lines were built to supply Russia’s own war in Afghanistan in the 1980s, and today Moscow’s cooperation is making them available for use by the US-led Nato/ISAF forces in their own Afghan campaign.

The second one is the southern route, which transits the Caucuses, completely bypassing Russia, from Georgia. Starting from the Black Sea port, Ponti, it travels north to Azerbaijan and its port, Baku, where goods are loaded onto ferries to cross the Caspian Sea. Landfall is Kazakhstan, where the goods are carried by trucks to Uzbekistan and finally Afghanistan. While shorter than the northern route, it is more expensive because of the on-and-off loading from trucks to ferries and back onto trucks.

A third route, which is actually a spur of the northern route, bypasses Uzbekistan and proceeds from Kazakhstan via Kyrgyzstan and Tajikistan, which has a northeast border with Afghanistan. But this route is hampered by bad road conditions in Tajikistan.

However, there are those in the diplomatic circles who believe that it would be hard for the Americans to induce any of the above former Russian states because many of their leaders believe that the American plans to get military supplies via their countries could draw the former Soviet colony into the battle as Cambodia was dragged into the Vietnam war.

The 10-day blockade against NATO convoys has ended, but it will cast its own consequences for many weeks and months to come on the US Operations in Afghanistan.

Paint your Rims yourself : D.I.Y