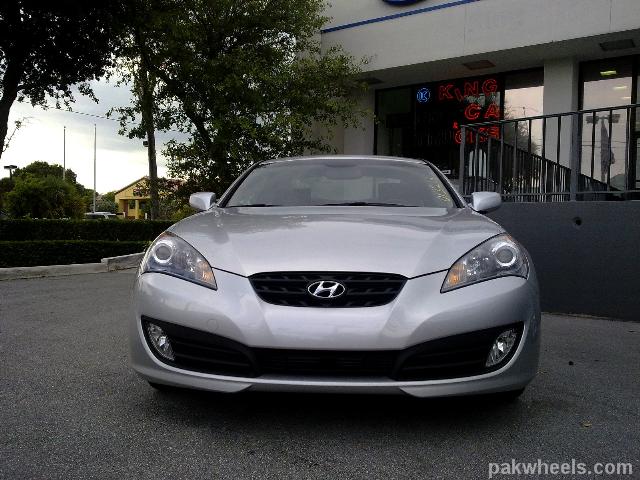 The 3.8 variant I drove back in May really impressed me since it did live up to most of the hype the automotive press created. It may not have been the best in its category- far from it, actually- but as Hyundai’s first go at the RWD sports coupe segment, it was a great ‘self-benchmark’. The one I was really interested in driving was the 2.0T model since it’s the cheapest entry-level RWD coupe available on the market.

Now the Genesis Coupe 2.0T gets a 2.0L Turbocharged 4 banger with 210hp and 223lb-ft of torque. I’d say that’s a healthy amount considering the $22,000…ish price tag. Around town get-go is subtle, as it should be, and the car does build up speed like it should. With a six speed gearbox and a short 3.91 axle ratio (Motor Trend), you do have to shift rather frequently to do so, however. To test its ability to hustle, I shifted into second gear and at around 25, planted my foot to the floor till about 50. Even with the numb throttle feel thanks to the drive-by-wire system, the Genesis Coupe’s acceleration isn’t all that bad. The turbo took some time to spool- time which doesn’t stand un-noticed- and the DBW system took some time to process the ‘input request’. For all you binary code freaks out there, that would be 001010110, I think.
The official numbers from 0-60 are listed at around 7 seconds. Automotive magazines have reported the same, give or take one or two-tenths of a second. I shall disappoint you all by saying that I can’t confirm those figures. But I can’t deny them either, so, it’s a win-win.

Ah drive quality, we meet again. Now here’s the thing: I haven’t been able to drive a bone-stock, un-tampered Hyundai Genesis Coupe yet. This one being the 2.0T Track did, naturally, have a stiff suspension setup and rode on annoyingly large wheels. So it suffers quite badly on this end. You can “feel the road”, and on a BMW or Audi it may sound good, but it’s not when you drive the Genesis. If you feel each tiny bump on the road, the feeling of being “one with the tarmac” wears off, especially on long highway stints. The back’s way too skittish over flat surfaces but then again so is the McLaren F1’s, which means you’re getting some street cred here with what is basically God’s supercar.

The inscription on the tire wall read 225 40YR/19, and for those who know what this means, they know you’re in for a thanksgiving sized helping of road-noise. By the end of the drive, I wasn’t hungry for any more.

I’d like to report on the clutch feel as well. I’d been told by a friend who drove the 3.8 with a 6-speed that the clutch would be a bit stiff. This coming from a person with a B6 Audi A4, a car with confusing clutch movements, meant a lot. I didn’t think it was too bad, though. I did have a bit of a jumpy start, but I got used to it early on. If a person like me (and I’m not a regular manual car driver since I own an automatic) can get used to the clutch feel, then it’s probably not too bad.

The REALLY annoying bit was the engine noise, though. There’s a bunch of different things that cause this. First, it’s Mitsubishi Evolution’s new 4B11T engine, which has been known to sound like a work-horse engine (quote blatantly stolen from MotorTrend) at low revs. It really sounds like you’re thrashing it all throughout the rev-range. I didn’t want to take it above 4000 revs simply because of this reason. The axle ratio was the most annoying. At 45mph, I was at 2500rpm in 4th gear. You really have to switch gears every half a second to a) keep going, and b) to not go deaf.

The brakes that came with the track variant were Brembos which worked.

I was pleased with the turning circle though. I think it was even better than my Camry’s- and that’s saying A LOT!

I went into the dealership with the mind to test this car for this ultimate category. You can drive a car as fast as you want, but if it’s kills your back everytime you sit in it, it’s not worth a dime. The seating position was great. The seats really hugged me, but weren’t uncomforatble at all. The center console is perfectly positioned. It sweeps all the way to the back seats. I love that it’s so high up. Perfect arm resting position. The back seats, however, wouldn’t even be comfortable for someone with polio. I’m a little shorter than 5’8, and I couldn’t even get into the back, let alone sit down, with my driving position. So this has the coolest connection with a “4” seater Porsche, in that, it isn’t really a 4-seater.

There’s nothing different here from the 3.8 except things that pertain to the engine and transmission.

Overall, I’d have to give it up to Hyundai for making a RWD coupe for us teenagers at a price we can afford. If you’re in the market for a new car in the sub-25k range, definitely give this car a thought. Personally, I’d go with a Civic Si Sedan or a 4 door GTi because can never escape the need for 4 or more seats. I know I’d be giving up drive at the back, but technically you’d only need propulsion at the back if you’re on the track. But considering that a Civic Si or a VW GTi are proven track dominators in their segment, you don’t really need rear wheel drive at all then, do you?