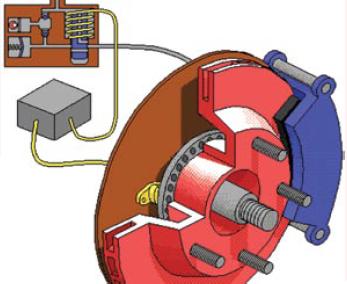 Anti-lock Braking Systems (ABS) is a form of electronic braking which was invented to help a driver to control a vehicle under heavy braking by preventing the wheels from locking-up.

Braking systems take the force applied to the foot pedal by the driver and transfer it via a mechanical system to the brakes on the wheel. The mechanism works by increasing the input force via a servo to the master cylinder, which converts the force into the pressure applied by brakes. The master cylinder has two pressure
chambers both of which are responsible for the braking pressure on two of the wheels and this is to provide an extra level of safety should there be a failure.

During this process there is a chance that the wheels stop rotating before the car comes to a halt. This process is known as ‘lockingup’ and means that the braking force on the wheel is not being transferred efficiently to stop the vehicle due to the fact that the tire is sliding upon the road. This leads to a longer
stopping distance than if the wheel had not locked because there is reduced grip between the car and the road, which in turn leads to
an increased chance of losing control of the vehicle and skidding.

On vehicles without ABS the best method to regain control of the vehicle is to ‘pump’ the brakes by taking your foot off the pedal and
reapplying it. This allows the tires to regain traction on the road, rather than skid over the surface of it. Suzuki Hi-Roof brake’s is one of the best example.

ABS works in a similar but much more effective manner. Electric sensors monitor the speed of the wheel as it rotates and detect if it is about to lock-up under braking. When this happens the brakes are automatically released and then rapidly reapplied. This process occurs several times to prevent a skid and to ensure that a vehicle can be steered by the driver to avoid a collision.

Although the ABS will not decrease a vehicle’s stopping distance compared to an identical vehicle without ABS, it ensures that the
shortest distance in which a vehicle can be brought to rest is achieved. It is particularly effective in doing this on surfaces which are wet or icy upon which a vehicle is much more likely to skid.

The main benefit of ABS is the control that a driver has over the vehicle’s steering. In an emergency the driver of a vehicle equipped
with ABS will have a better chance of steering around the obstacle due to the reduced risk of skidding.

What to do in Emergency Situation:

If your vehicle has ABS, in an emergency situation firmly press the brake pedal and keep your foot hard on the brakes.