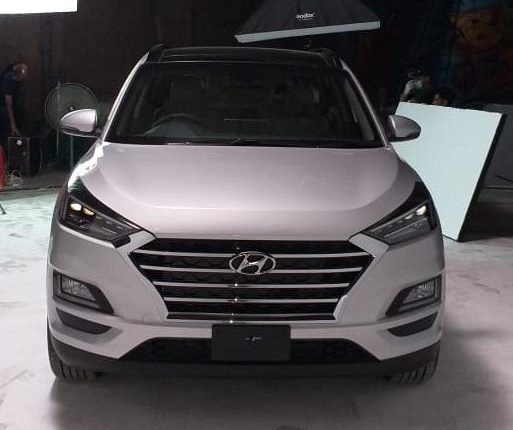 Hyundai Nishat Motor is all set to launch its crossover SUV Tucson in Pakistan. The company has announced that it will introduce the new car during Pakistan’s first digital launch today.

According to auto manufacturers, the ceremony will be held at 7:30 pm PST.

Hyundai Tucson is the main competitor of KIA Sportage and Toyota Fortuner. Earlier, we have presented a comparison between Tucson and Fortuner.

Today will present the comparison between Tucson and Sportage. According to details, Hyundai is launching two variants of Tucson, i.e., Tucson Ultimate and GLS Sport.

We will compare these potential variants with KIA Sportage 4WD and 2WD variants.

Tucson Ultimate comes with State Cornering Light, which is not available in Sportage. Furthermore, the other features and specs which TL Ultimate has, but Sportage does not have them, are AFLS (Dynamic Bending Light-L/R), Glover Box with Cooling, and Phone Wireless Charging.

Meanwhile, the specs which Tucson’s variant does not have, comparing to Sportage 4WD, are Parking Sensors (Rear and Front), Rear Fog Lamps, and Rain Sensors. However, both variants come with Driver Power Seat.

The further comparison revealed that both TL Ultimate and Sportage 4WD have Alloy Rims. The Display Monitor Size of  Ultimate variant is 10-inch, while Sportage 4WD comes with a 8-inch screen. The size of Cluster LCD-Full Panel Color in Ultimate is 4.2-inch, while it is 3.5-inch in KIA’s variant.

The Tucson’s variant has full Chrome Outside Door Handles, while they come in half in KIA Sportage 4WD.

If we compare these two cars, we will find that Tucson TL GLS Sport comes with Static Cornering Light, AFLS (Dynamic Bending Light-L/R), Glove Box with Cooling, Driver Power Seat TL, and Phone Wireless Charging, while KIA Sportage FWD does not has these features.

Meanwhile, Sportage FWD comes with Parking Sensors (Rear), Rear Fog Lamps (Bulb), and Rain Sensors, as the Tucson variant does not have them.

Both variants do not have Front Parking Sensors.

If we compare further, we’ll know that the Tucson variant has Alloy Rims, including spare tyre,  while KIA Sportage FWD has also Alloy ones, but its spare tyre is made of steel. Meanwhile, the size of Tucson’s display monitor is 10 inches, while its size in Sportage FWD is 8 inches. Meanwhile, the size differences in Cluster LCD-Full Panel Color and Chrome Outside Door Handle are the same as those of the variants mentioned above.

As the engines of both cars are same, hence, it is expected that fuel average of Tucson variants will be same as KIA Sportage variants. The intra-city fuel average of KIA AWD is 10km/liter, and highway average is 12Km/liter. Meanwhile, the average for KIA FWD is 12km/liter and 14km/liter respectively.

Following is the comparison between Tucson GLI Sport (FWD) and KIA Sportage (FWD): 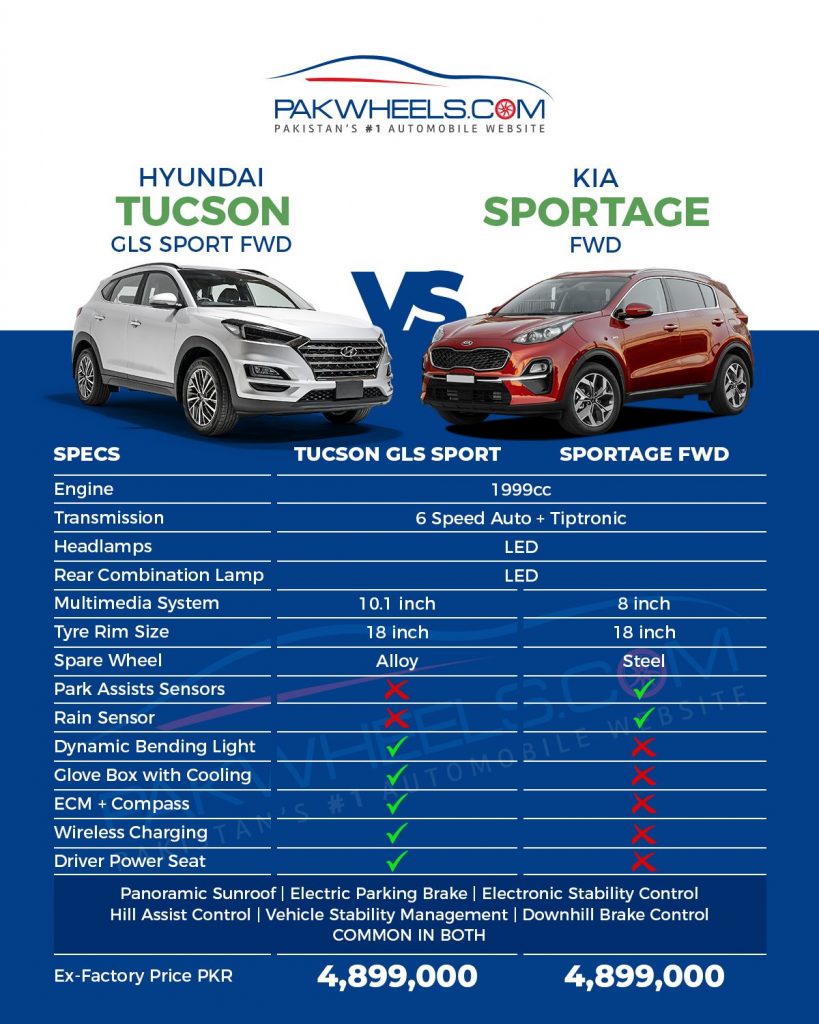 Following is the comparison between Ultimate/AWD variants of Hyundai Tucson and KIA Sportage: 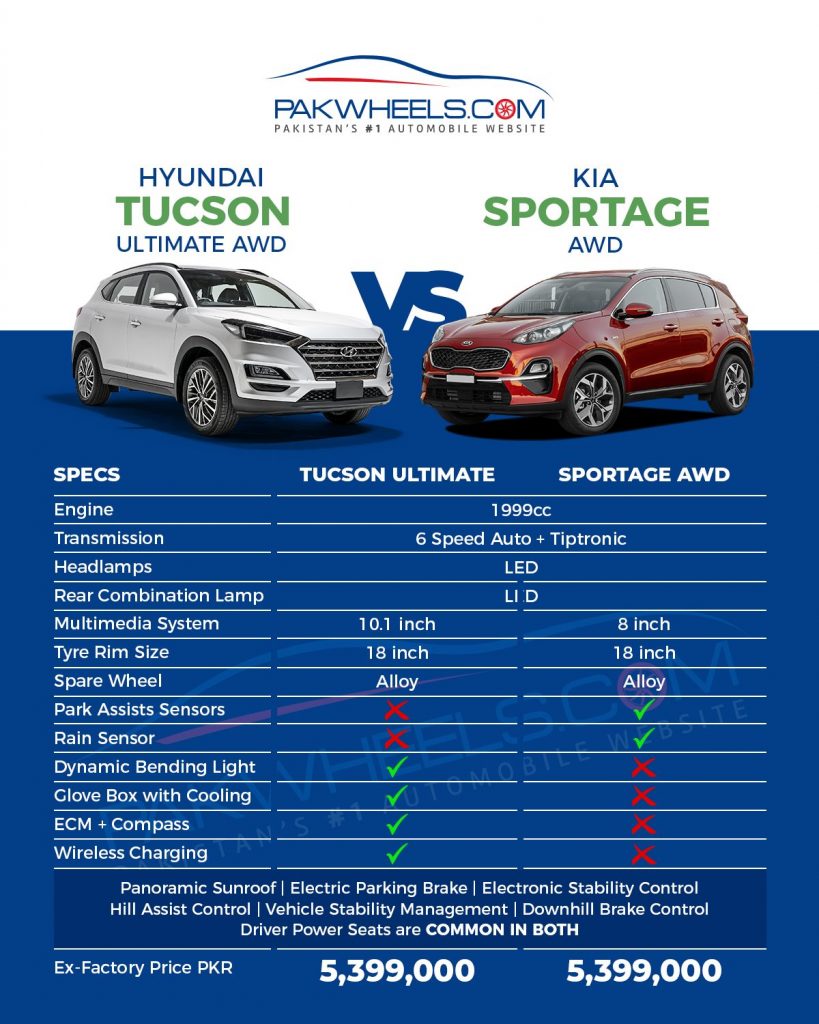