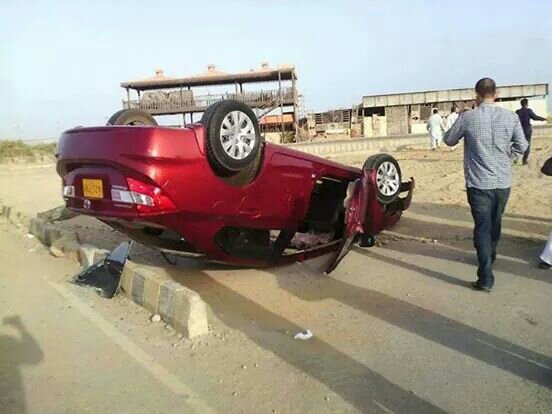 Is the 9th Generation Honda Civic a Mechanically Flawed Vehicle?

The 9th generation Civic was a much needed improvement over its predecessor in suspension, fuel average and features etc. But lately a lot of crash-pics have been uploaded on PW forums of the 9th generation Honda Civic. These pictures have sparked a debate on the car’s performance. So I thought to carefully analyse this situation of these increased number of accidents. As far as my observations and notes go there are two types of issues, which are leading to this sudden increase in the accidents of Honda Civic 9th generation:

It is the most obvious and can be observed at any road in the country. There is a class of youngsters and adults who really like to put their foot hard down on the accelerator without considering road and driving ethics. Cutting lanes at high speed is a very common trait among these drivers, who like to take their family sedans at very high speeds with non-performance tires and brakes on public roads. This behavioural impulse can be seen all over the world, but due to proper road infrastructures, the damages done is reportedly lower and actions like these are generally faced with severe penalties.

Yes, the driving habits matter a lot and as a matter of fact, they are attributed as the major reason of fatal accidents, but despite their overwhelming numbers; there are other factors which also contribute to heavy loses.

2: Are there any other reasons?

Contrary to popular belief, rash driving isn’t the only factor leading to fatal accidents. Likewise, there exists a school of thought which remarks that Honda Civic 9th generation is claustrophobe of badly designed and implemented changes. On the surface, you might be inclined to agree with them, but my personal opinion varies from this. I drove this car in various conditions and following is my take on this:

4 Facts You Might Not Know About Smart Vehicle Registration System