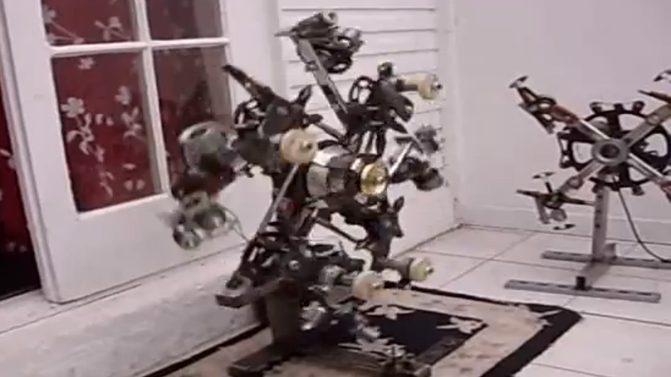 Scientists are working tirelessly to find a new economical and environment-friendly engine which saves Earth resources and eventually, save Earth as well but it is a race towards the domination of resources, energy resources.

However the anonymous inventor of this engine went off the line by defying all the laws of Physics by making an engine which absorbs less energy than the energy it produces. Sounds like Ajmal Bangali is at work here but, The Alpha Omega Galaxy Freefall Generator, as seen in the video below, is able to move the flywheels even though it doesn’t seem that the The Alpha Omega Galaxy Freefall Generator AOGFG will be able to move the engine/machine itself.

And it’s made with leftover bicycle parts, a windscreen-washer motor and few magnets. Therefore, wheels with magnets on spin around, apparently creating energy from gravity. A tiny amount of power provided to the machine via said washer motor, which is transferred onto the weird spiny bits using a rubber band cut from a bicycle inner tube.

The anonymous inventor claims that a commercial version could produce enough power to run a house, virtually free of charge, and could be installed anywhere without the need for a power source.

The inventor further said that The Alpha Omega Galaxy Freefall Generator (AOGFG) is a different eco-friendly way of producing electricity.

After KESC announced that 10 hours of load-shedding will be done in Karachi and the sky-rocketing prices of fuel making it impossible for ordinary Pakistanis to afford a generator, I think Pakistanis now have a reason to believe in the future.