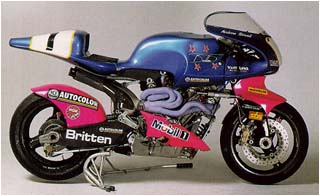 John Britten V1000: A bike ahead of its time

I was watching a documentary on Discovery Channel about Greatest Ever Motorcycles, when one bike caught my attention for its unique design and also because it was not made by any renowned manufacturer around the world. The bike was John Britten’s V1000, a completely hand built bike which had broke many world records in the early 90’s. This bike was designed and built by a mechanical engineer from New Zealand.

This bike had so many radical concepts which were not available in the other bikes of that era and even not many bikes have it nowadays either. It is a known fact that speed is inversely proportional to weight, so to gain more speed one have to reduced the weight of the vehicle and that’s what John Britten did by extensively using Carbon Fibre, but the real innovation was to build a bike without a frame and the real beauty of V1000 lies in a non frame structure which uses engine to act like a frame as all the front and rear suspension is attached to it.

This Bike is literally built in the backyard of Britten’s house, where from carbon fibre to engine block all been built by Britten with the help of his friends and wife. This bike has competed in several motorbike events such as New Zealand Grand Prix, New Zealand Super Bike Championship, Battle of the Twins on places like Daytona Motor speedway, Assen (Ned), Baturst (Aus), Laguna Seca and Isle of Man TT. Britten has astonished the motorcycle world when his bikes took 2nd and 3rd at Daytona in 1991 against factory teams. In the following years these bikes did broke several world records and won several races on international circuits.

In 1995, John Britten died because of skin cancer but before his death he gave this world a real innovative and classic bike with concepts that have never been thought by the big manufacturers. As renowned motorcycle journalist Alan Cathcart said about the bike:

“It’s an easy bike to ride, in the sense it’s got a very wide power delivery, but to really get top performance, you have to ride it like a grand prix bike.”

And having ridden all the superbike contenders in the world today, I can say that the Britten is the closest to a grand prix bike. It’s incredibly ironic that instead of Europe or Japan, the most sophisticated and technically advanced motorcycle in the world comes from New Zealand.”

Only 10 bikes and 1 prototype were built and now most of them are present on display in museums around the world including one on permanent display at Museum of New Zealand Te Papa Tongarewa, Wellington. The Bike remains in production from 1991 to 1998.

From 1996 to 1999 various race wins in different championships around the world.