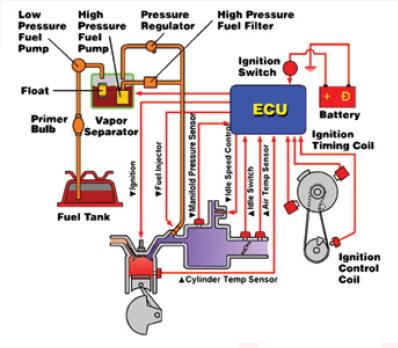 Know your EFI before we tell you how to maintain it in the next part of “How to keep your car always new“.

Today’s technology does not enjoy the freedom it enjoyed in yesteryears. Today technology has to conform to various regulations relating to different aspects of life namely health, environment, society etc. Strict laws are in force to control the
detrimental effects of technology. One such law in force in developed countries is the emission regulation created and enforced by Environmental Protection Agencies, which requires the content of harmful gases in emissions to stay within the prescribed limit.

In the 1960’s, studies were conducted into sources of air pollution in the United States and automobiles were held responsible for
the most significant damage. By late sixties emission regulation was
put into force to control this type of pollution.
This regulation was the main motivation behind introduction of
Electronic Fuel Injection (EFI) system in cars and today all automobiles sold in United States have this type of fuel
supply system.

The engine in automobiles is an internal combustion engine. In it, fuel mixed with air in a pressurized environment is ignited, causing combustion with an explosive energy. This energy is converted into mechanical energy by the engine and is the primary force responsible for the movement of an automobile. As air is required for combustion,a proper amount of it should be present with the right amount of fuel in the cylinder to allow complete burning of the fuel and avoid leftovers in the exhaust emission, which are the main cause of air pollution. If air is more than fuel the engine runs lean and if air is less the fuel does not burn properly and the engine runs rich. In this case the emission will have a large amount of unburned fuel in it resulting in environmental pollution.

To maintain the proper fuel/air ratio the supply to the engine is done through a fuel metering system, which can be of three types:(Carburetor, Port Fuel Injection and Direct Fuel Injection).

Since the early internal combustion engines, the carburetor has been the device that provided fuel to the engine. The function of the carburetor is to mix the right amount of fuel with air as air flows into the engine. With the advance in technology, it has became more and more difficult for the carburetor to cope with the increasingly complex operating requirements. The carburetor is also unsuitable to meet emission regulations.To overcome these shortcomings Electronic Fuel Injection (EFI) technique was introduced in cars. The initial type of fuel injection was throttle body fuel injection systems that supplied electrically controlled fuel into the throttle body. These later evolved to multi port fuel injection.

In EFI system, fuel is injected in measured quantities in the engine to allow optimum mix of air and fuel and reduce unburned fuel to least possible levels. The fuel is injected to the intake valve in atomized form by injecting at high speed through a small nozzle, this allows a much better air fuel mix that would be possible otherwise. Complete combustion of the fuel will occur only if the air/fuel mixture is in the right stoichiometric ratio (the amount of air required to burn a certain amount of fuel). Many components
play a part in this, typically the following components are involved;

Injectors – ECU turns injector on for an amount of time known as injection pulse width or injection duration. This duration is calculated by ECU for different operating conditions according to a formula. In multi-port fuel injection all the injectors can open at the same time (synchronized injection) or each one can open just before the intake valve for its cylinder opens (sequential injection). The
latter is more desirable as it more readily adapts to sudden changes and the time taken to incorporate changes is for the next valve to open rather than wait for the complete engine revolution.

A number of sensors are used by the ECU to monitor each and every activity that is taking place. The various sensors include the Mass Airflow Sensor, which is used to monitor the amount of air entering the engine.Oxygen sensor also called the O2 Sensor,
EGO (Exhaust Gas Oxygen) sensor, is used to gauge the amount of oxygen in the exhaust to see how rich or lean the fuel mixture
is.The position of the throttle valve is also monitored by a sensor, the Throttle Position Sensor to see how much air is entering the
system. There is an Engine Speed Sensor that monitors the speed of the engine. This factor helps in calculating the pulse width.

Fuel metering is done by ECU based on information from all these sensors. This way the system gains control over the small fraction of unburned fuel. It strives to match every molecule of fuel to a molecule of oxygen so that none remains after combustion. EFI
for different type of fuel engines require corresponding programming of the ECU. EFI allows improved engine performance, enhanced driving experience, better fue lefficiency and improved emission control.Although technologically more advanced EFI is mechanically less complex and requires little maintenance and periodic adjustments than other fuel metering systems.

Due to widespread usage EFI is becoming less expensive and more reliable. In developed countries it has become costlier to maintain carburetor fuel metering than EFI due to gradual phasing out of the
former. In developing countries however,where emission regulations do not exist the carburetor is still a less expensive alternative and it will be some time before EFI gains widespread usage here.

“You know you’re in Pakistan when” Motoring Edition