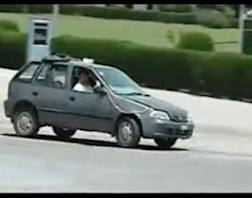 Lesson to be learned from Agha Waqar’s water-kit farce

Since a while, there has been a flurry on the news of water-run cars being designed, fabricated and run by numerous designers, engineers, technicians and self taught mechanics. As any new ground breaking discovery or invention that comes to light in the scientific community, this issue has also shared its fair share of controversy, from people claiming it to be the messiah for an energy starved country to an outright fraud with people going to and beyond claiming it to be a hoax with media-men and politicians in cahoots to milk the government of its dwindling development funds by playing on the emotions of a starving nation.

Being an engineer and researcher, whenever anything of interest fancies my attention, I like to analyze it and try to get to the bottom of it. Whether the claim made by certain inventors is certainly worth following or the theory supporting it so out of the wind that it doesn’t need wasting anyone’s time. I tend not to go into the motives of the individuals however sinister or noble but just to, at first, understand and then develop upon the ideas presented.

Following the controversies, prominent scientists and researchers from Pakistan have been at it as well. Professors and doctors generally are in the unfavourable camp while some are going so far as to calling it not only possible but an end to our energy and transport woes. What everyone again fails to explain to common people and laymen is the concepts of their arguments. Each person arguing with the help of scientific laws and postulates, which apart from the scientific community nobody really understands.

This style of explaining things and scientist versus layman war has made this issue a lot more complicated. The inventors claim not to be bound by laws of physics and alleging scientists to be slaves of laws and theories and people equating these inventors to the likes of Galileo who were condemned for their unconventional and tradition defying theories. Although I am not a believer in the phrase “we live in a golden age where everything worth discovering has been discovered” but I do believe that our science is at the stage where mere hypotheses like the one’s claiming the earth to be flat have no place in the scientific world and everything is provable and should be proved, either in theory or by absolute transparent demonstration. What people need to be told is in simple terms how things can and cannot work.

Let’s see at what these inventors are claiming. In short you put in water and by some technical and scientific manipulation it passes through the system producing energy necessary to propel the car and at the end you have water “again” at the exhaust. Now let’s take a look at the systems that already exist in the universe. No laws, no physics, no science just common sense. Take cars for example, the conventional ones. You put in petrol or any fuel in a form which is burnable hence able to give off energy, are burned in the engine giving off heat and other forms of energy and at the exhaust guess what? You get petrol? Or smoke? Even people confuse hydrogen run cars like the BMW Hydrogen 7 with these water-run cars where the fuel is Hydrogen and not Water. Enough with cars and airplanes let’s look at humans. We need to eat to function, to get energy. So what do we do? We eat (an apple for example) burn it in our bodies, use its energy, running, playing and God knows doing what and when it’s time to answer the call of the nature, we walk out of the toilet holding a perfectly pristine apple dropped into our hands? Do we really end up with an apple? Why we don’t, is just because of the fact, that when the poor apple gives its God gifted stored energy to our body it sacrifices itself and turns into something, not even remotely resembling an apple. And this is the case with everything, every system in the universe, from the previously thought limitless Sun which needs to turn to helium from hydrogen to keep on producing heat and light to a small mouse nibbling on a piece of bread and dropping its excrement when it’s done with it, to a nuclear power reactor taking in uranium and depleting it to a an unusable form.

And now we move onto this clash of inventors versus scientists and engineers. The inventors claim the scientists to be prejudiced in their belief that they are bound by the laws of physics, however archaic, and are not willing to look outside the box, as they say. Whereas the inventors claim to somehow defy these laws and create something outside the realm of modern physics and mechanics. They claim that they have shown that the things work and need no theory to prove it. The explanations that I have seen on the television by the presenters, sorry to say, lack to fulfil our scientific appetite. And there seems to be certain reluctance at the inventors’ side to have their inventions scrutinized by the scientists as, they have always claimed, them (scientists) to be bound by their laws, in which case the inventors need to come up with their own theories because all the tests run by the scientist will be guided by the laws they follow, whom the inventors don’t have a faith on. The question may arise why then do we need to validate or present a theory of something in the first place? The answer again is very simple. You go to buy a bar of soap, do you start bathing in the shop or do you read the label and trust the explanation given on it? For anything to be able to be sellable and marketable there needs to be a certain explanation attached to it otherwise nobody would believe the claims and they would be merely shrugged off as wizardry and hoaxes.

My humble opinion in the end is to come up with an explanation simply understood by people and the claims to be provable. Because people DON’T drop apples and DO go hungry.

The next Lamborghini Gallardo rendered