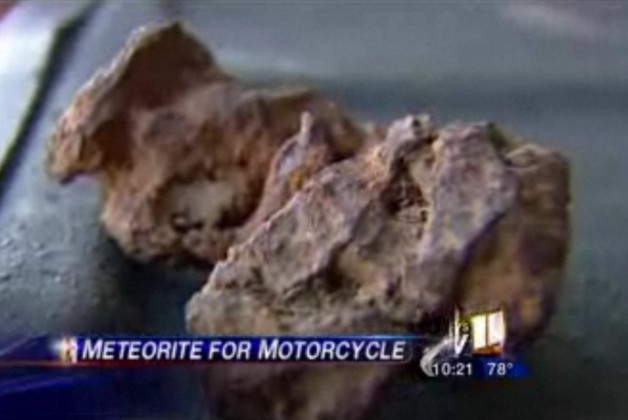 Man exchanges meteorite for a Harley-Davidson

So everyone must be wondering that are meteorites that valuable? Well they aren’t but they cannot also be compared with an ordinary rock found on planet earth. But one man in Arkansas, USA thought to try out his luck by calling in one dealership of Harley-Davidson to see if they would trade him a motorcycle for a rock and quite surprisingly, they did.
Jim Griffey was out minding his own business, planting trees in his backyard, when his shovel hit something solid. Out came an unidentified rock and in went the tree. That rock, though, was unlike anything else Griffey had ever seen, and had some rather strange magnetic properties.

Sensing something was awry, Griffey took his find to a local expert, who concluded that this unassuming chunk was actually a meteorite that had fell from the sky and embedded itself years ago into Griffey’s backyard.

Wondering the use of the rock from outer space had no use for him, well not more than a motorcycle, he tried out his luck which was shining, Landers Harley-Davidson agreed to make the trade if Griffey could get the documentation that his trade-in is really a meteorite.

Taking the rock in instead of cash against the iconic Harley-Davidson motorcycle, auto pundits are saying that this is a shrewd move by the Harley-Davidson dealership and besides, the rock may hold no value to match up the retail of the Harley-Davidson in question, they sure can’t buy this kind of publicity which their annual marketing budget can support quite easily.