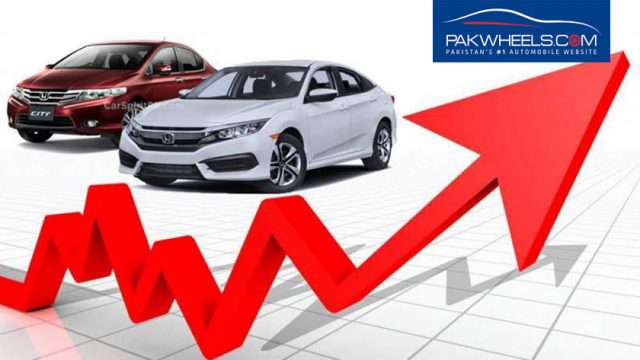 A massive hike in car prices was observed in 2019 – Have a look!

The automobile sector of Pakistan witnessed many ups and downs as a record decline in the sales of cars as observed during 2019 with every other factor going massively upwards. The value of rupee against the US dollar decreased considerably thus resulting in an unbelievable hike in prices of cars. The imposition of several additional taxes and duties on locally manufactured cars also raised their prices to a certain point where the consumers were left empty-handed. The demand for cars in the local market decreased substantially due to sky-rocketing prices and decreased purchasing power of the consumers. The only positive prospect during 2019 was the entry of several new players under the Auto Development Policy (ADP) 2016-21. The local sector was previously dominated by the three Japanese auto giants i.e. Suzuki, Toyota, and Honda. The entry of new automakers added more choices for the consumers to pick from, hence ending the monopoly of the existing car makers in the market. At the same time, the economic slowdown process in the country has badly dented several industries including the auto sector. In this blog, we will have a detailed recap of the car prices as they stood at the beginning and end of 2019 from the major auto manufacturers in Pakistan.

Pak Suzuki is the only automaker that largely operates in the entry-level and mid-range hatchback category. Pak Suzuki, like other auto giants in the auto sector, struggled to sell its vehicles in the market. The company introduced the all-new 660cc Alto in June 2019 that has turned out to be the highest-selling vehicle for the automaker thus saving Pak Suzuki from a complete disaster. In only six months, the price of Alto has gone up by up to 19% which is truly unjustified considering the rate of the dollar has gone down since its launch. 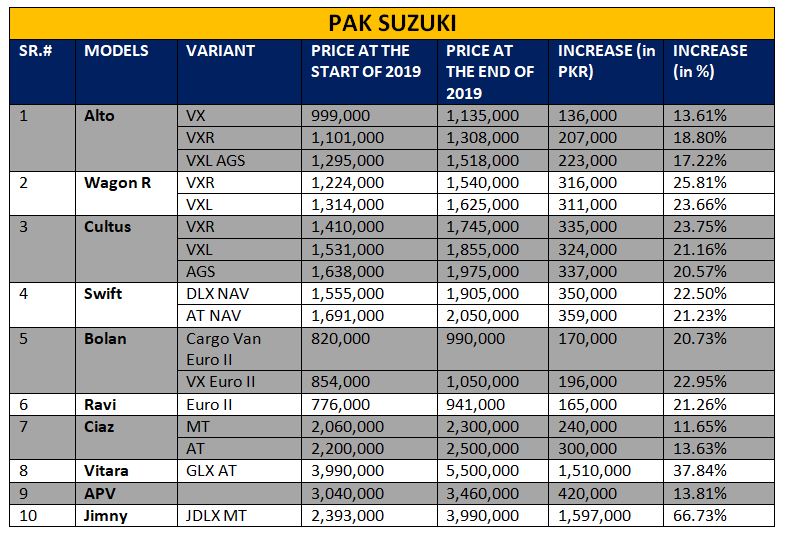 Toyota Indus is one of the most popular Japanese automobile brands in the country for decades now. The automaker operates in the high-end car segment with Toyota Corolla as the most favorite car by the consumers in the country. However, the year 2019 changed the whole scenario for the automaker as it struggled to sell even its popular sedan in the local market owing to the high prices. At the start of 2019, Toyota Corolla’s 1.3-liter base variant XLi was available in PKR 2,044,000 whereas it now stands at PKR 2,499,000 with a difference of PKR 455,000 in just 12 months period. Similarly, the increase in the price of the top of the line variant of Corolla i.e. 1.8-litre Grande CVT SR was observed as PKR 700,000. Its price went up from PKR 2,999,000 on 1st January 2019 to PKR 3,699,000 towards the closing of the year in December. Overall, an increase of 19% to 23% was witnessed in the prices of different variants of Corolla. The reduction in the sales of Corolla meant an overall decrease in the sales of the company’s products. Note here that the increased price of Corolla also includes the imposition of 5% Federal Excise Duty (FED). 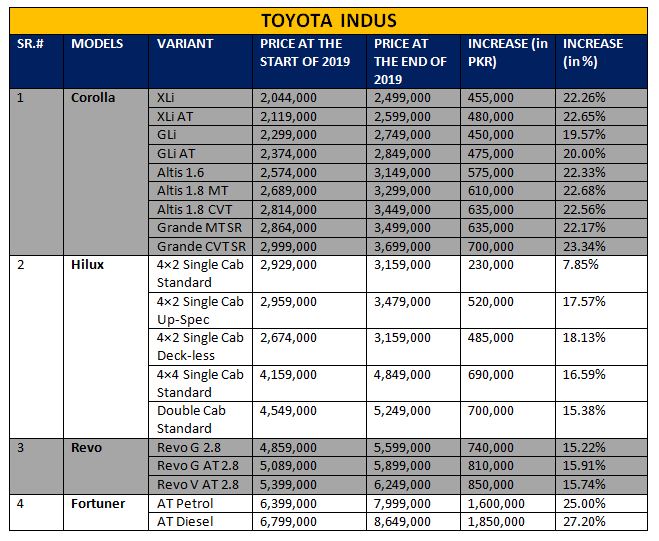 Honda Atlas also operates in the same segment of cars in the local market as its competitor Toyota Indus. The company largely depends on the sales of its Civic and City models, both of which suffered massively during 2019. The company reveals the combined sales stats of both its cars and as per the PAMA report, its sales went down by nearly 46% on year on year basis. The old price of the base model of Civic was PKR 2,809,000 whereas it now comes in PKR 3,499,000 with an increase of PKR 690,000 or 24.56%. Its higher-end model’s price surged by PKR 790,000 or 26.69% in this period and now costs PKR 3,749,000. On the other hand, Honda City’s price also jumped as high as 25% during 2019. The base variant of Honda City i.e. 1.3L MT was previously available in PKR 1,854,000 which now costs PKR 2,309,000. Similarly, the top of the line variant of Honda City 1.5L Aspire AT now comes in PKR 2,699,000 with an increase of PKR 495,000. Honda Civic and City (combined) contributes to 87% of the overall sales of the company which shows the automaker’s dependency on these two models in the local market.

Despite receiving a facelift version later in 2019, Honda BR-V struggled in the local sector. Its price has also gone up by as high as 31% in the Jan-Dec period of 2019. Its high-end model is now available in PKR 3,249,000 whereas the base model comes in PKR 2,899,000. Have a look at the table below for complete details of the price increase of each model of Honda Atlas. 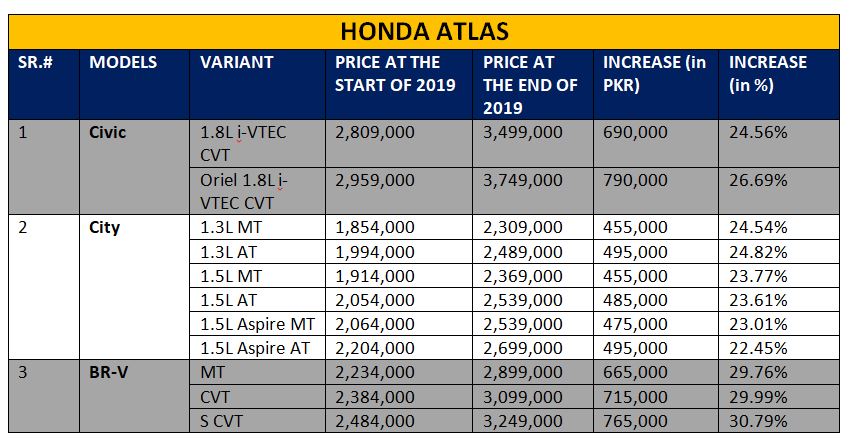 Al-Haj FAW is the other automaker in the local industry that produces a 1000 cc hatchback along with light commercial vehicles. Its popular FAW V2 witnessed a price hike of nearly 41%during 2019 as it now costs PKR 1,574,000. The other LCV’s of the company also observed a price increase close to 36% in this period. None of the models of the automaker now cost less than PKR 1 million in the local market.

United Motors entered into the car manufacturing back in 2018 when it introduced the most-anticipated 800cc hatchback Bravo in competition to the existing Suzuki Mehran. Ever since the company has also introduced a facelift model of Bravo in the market as well. The automaker also raised the price of its only car in the local sector by nearly 16% during 2019. United Bravo now costs PKR 985,000 instead of PKR 850,000 which was also the introductory price of the car.

Nonetheless, the end consumers were at the receiving end of this whole recap of 2019. Even the prices of motorbikes surged by a good margin in this tenure. However, the automakers are optimistic about the future and believe that the beginning of the next year would bring back the lost charm of the auto sector of the country. How do you see the year 2020 for the auto sector of Pakistan? Let us know in the comments space below and stay tuned to PakWheels for more updates.