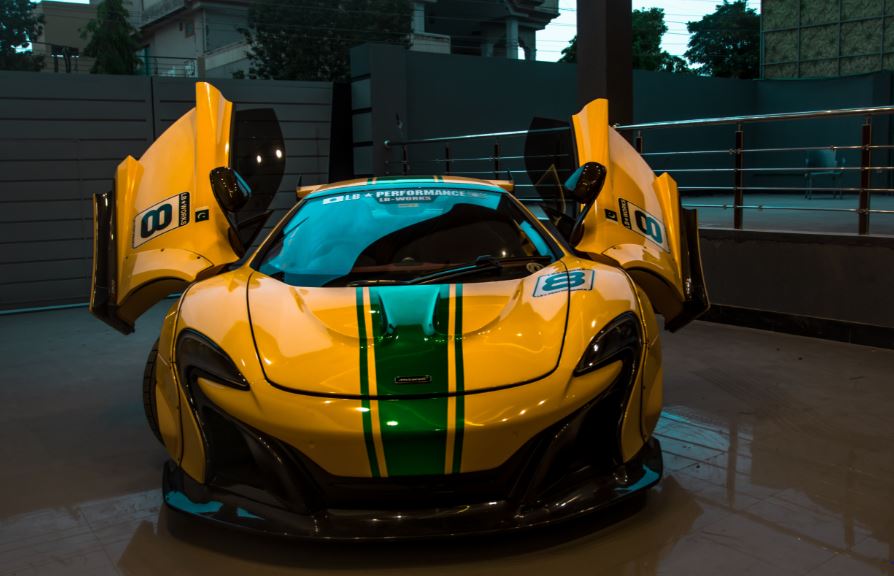 The McLaren 650S Spider belongs to the McLaren Super Series. McLaren has a huge presence in the F1 motorsports and has one of the most successful teams. This racing heritage can be seen not only in the powertrain but also in the design language. McLaren engineers endeavor to transfer insights from their F1 cars to their on-road cars like Mclaren 650S. This particular model was launched in 2014 and is a successor to MP4-12C 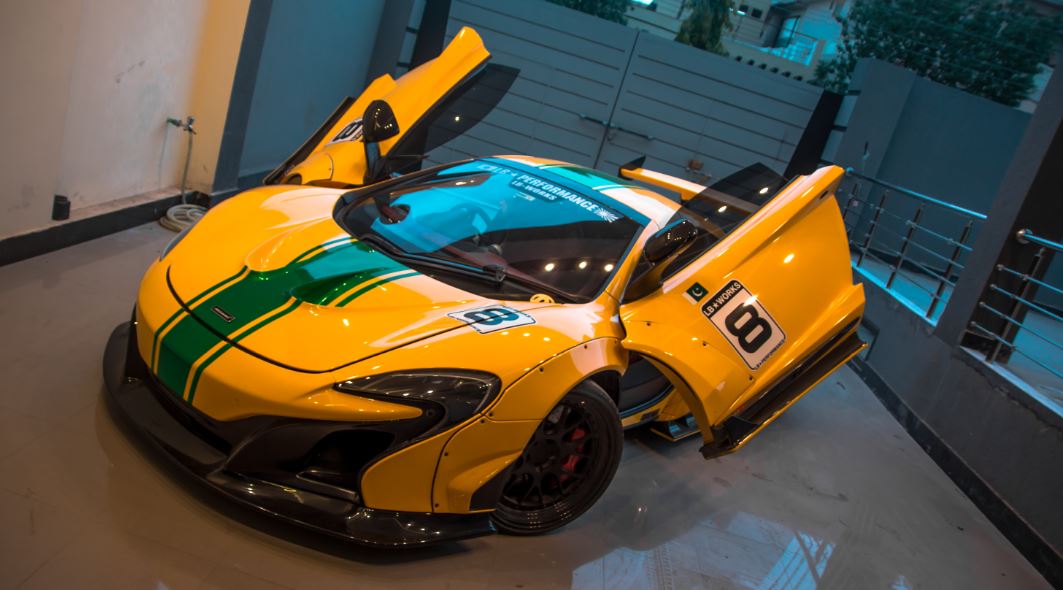 The exterior of this particular car has a Liberty Walk kit which enhances the sporty look and appeal of the car. It also has various badging on the doors and rear bumper, indicating that it has body kit from Liberty Walk. This body kit includes a complete redesign of the front and rear bumpers and has extended fenders. Holding some of the parts of the body kit in place are exposed black bolts that go well with the carbon fibre trim. The rear of the car features center exit exhaust and a massive rear diffuser. Rear lights of McLaren 650S are LED and are seamlessly integrated into the design of the car. The rear also features a huge chassis-mounted wing. The headlights are designed to mimic the McLaren logo. This provides a distinctive look to the McLaren 650S on the road. This car also features massive blacked-out 20-inch rims to further underscore the sportiness and performance nature of the car. As standard, McLaren 650S comes with carbon fiber side mirrors, side scoops and front air scoops. This particular car is a hard-top convertible and the roof is body-colored, unlike soft-top convertibles. Instead of door handles, there are buttons to open both doors and they are mounted seamlessly into the doors. McLaren 650S has butterfly doors which have become a distinctive identity of McLaren cars. The interior items are laid out in such that it is easier for the driver to access them. This is becoming more and more common in performance cars which are becoming driver-focused. The car is designed around a strong Carbon Fibre Monocell which enhances the safety of the driver. The sitting position in the car is very low to the ground and gives a sporty feel to the driver. Most of the controls are mounted in the door like climate control and power window buttons. Carbon fibre is also used in the steering wheel to reduce weight. Customers can also opt for hand-stitched leather on the steering wheel to give it a premium look. The dashboard has round silver-colored climate control vents. The dashboard is covered in leather and the customer can customize the color of the leather. On the right-hand side of the driver, headlight controls are mounted in the dashboard. The steering column also includes cruise control and upshift and downshift controls. The start-stop button is conveniently located in the middle underneath the infotainment screen. Below this button, you can find controls to select different driving modes and the button for the launch control.

The McLaren 650S comes with a 3.8L twin-turbocharged V8 (M838T) engine which pumps out 641hp 678nm of torque. This car has a mid-engine design which helps in providing more stability to the car especially when putting it in corners. The engine is paired with a 7-speed dual clutch automatic transmission that provides seamless shifts between the gears.

The powerful engine propels the car from 0 to 60mph (96.5kph) in just 3 seconds. The carbon ceramic brakes are also very efficient and effective in stopping the car even from very high speeds. McLaren 650S Spider can reach a top speed of 329 kph. The power produced by the engine flows to the rear tyres. If you rev this model to 8500 rpm, the entire 650hp power delivery is made available to the rear tyres and it behaves like a proper race car. The engine needs servicing every 10,000 miles or annually in order to ensure optimal performance.