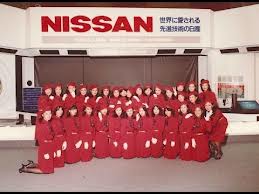 Miss Fairlady is not your 350z actually

For a long while, I have wondered but never actually went digging to know why is Nissan’s 350z called the Fairlady Z, turns out, there were many more and for that matter, Nissan has produced a video showing the actual Fairladies, the Nissan Fairladies.

Back in the day, when Datsun was introducing the Fairlady (which would today become the “Z” range of cars), it hired and trained women to help sell them. The video is not about the car but as the title reads ‘Miss’, it is about the women who were hired to help sell them. Introduced as a concept to accompany a marquee dealership in Tokyo’s chic Ginza area, the five Miss Fairladys were given product training so they could answer customer questions, a new thing at the time.

Watch this video which tells about who and what are those Miss Fairladys.