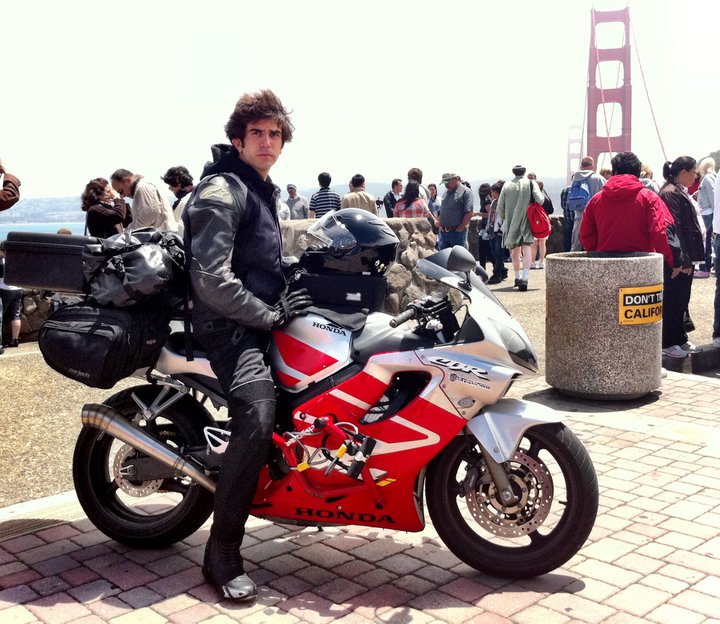 Perception of Pakistan around the globe is quite a negative one, often do we read about how Pakistanis living abroad have to cope hard to give away a clearer picture of our country that it’s not about just bombing and trigger-happy-madmen.

Everyone has their own style and Moin Khan has his and I like his more than anyone else’s due to a passion we both share, Pakwheelers even more so.

Road trips/traveling, when I first saw Moin’s thread on PW, I instantly called him insane on his selection of ride of the trip, a Honda CBR so obviously, this was the first question I asked when we sat down the other day to have a little chit-chat about his endeavors on the trip.

Going on such a long trip which involves crossing multiple continents, I was somewhat

shocked to see him deciding to ride a sports bike, which can be back straining but, I love his answer and nodded my head in firm agreement, Moin said that he was on a different agenda and he wanted to do what nobody had ever done before, if he had done the same trip on a BMW touring bike than no body would’ve noticed as hundreds of travelers have gone more than him and worse so he instead chose his Honda CBR. Also, sports bike were his passion so it was a no brainer in the selection of the ride.

Yet I came back, fair enough, people go through worse in pursuit of satisfaction through doing their passion but a back strain will not hold back because you have passion, therefore, did you had any thoughts of regret that why am I doing this? To which Moin replied enthusiastically that if it were for himself, then maybe I would’ve had a sense of regret but I was doing this for my country, so no question of regret.

He continued the answer towards the reputation of its country and mentioned one instance when he was tired and moved over towards a campsite in America. The campsite was filled with Americans who spend their lives on the roads forever and when he arrived, the emptied one of the camp especially for him instantly and with gratitude offered him to stay as long as he want and then served him dinner and while having it, somehow the conversation went towards discussing Islam and she mentioned her fear that Islam allows to treat women as slaves and beat them to which Moin corrected them that’s nowhere written and you should, read atleast the Holy Quran not as a Holy book but just as a general book and that’ll clear your wrong implications you have about our dear religion.

If he wouldn’t have been there to correct than the generation that will follow would’ve continued on with the same thoughts about Islam and Pakistan, but the lady offered her apologies and thanked Moin for his correction over her thoughts.

I was quite impressed about Moin instantly and understood that his passion does not solely lies with a cross-continental road trip but, it was a different agenda, which is to change, infact correct the negative perception which has built through the image reflected on various media outlets about our religion and country.

Moving over the casual chit chat we were having as I had to meet him on such a short notice that I couldn’t come to him even with a pen and a pad to note his interview so we kept it general and that was so interesting to hear him about his journey that I knew, I cannot forget it that easily so a pen and a pad would’ve made no difference.

But, I told him how he had worked as an aspirational figure to many Pakwheelers on road-trips and asked about what he would say to the people who always fail to go beyond the planning phase of their road-trips to which he replied in a rather satisfying manner that if you have passion and a clear line of sight about what you want to do, than there’s no holding back and you go ahead and do it.

I firmly agreed to him that whenever we sit down to plan a road-trip, it never materializes but an instant plan and get on the road always work.

Moin turned out to be quite a company which we were enjoying so much that an hour and a half seemed to have passed in moments, but due to his time reservations, I quickly asked him about what he wants the most in his reception back at home and he said that I just want my mom’s cooked hot Parathay and I couldn’t disagree because those who live away from their moms’, know the true value in welcoming lies with her love expressed through her hand-made food.

So I moved on and asked him whether or not we should be expecting a journal of your trip in form of video documentary or not, and he replied that yes he have plans to do a documentary on his trip about which he is in contact with a friend of his to produce it.

Exciting yes, how soon, not even Moin could tell that but anyhow, we wish him best of luck with that so that his agenda of showing even Pakistanis are normal people like everyone else on earth goes beyond level 100% completion.

With this we left but only to have him again with a proper question and answer session, if you have any questions you’d like to ask him than leave them in the comments and we’ll make sure you get your answers as Moin is a jolly good man.

Or Pakwheels topic: 40k KM on a sports Bike from USA to LAHORE SOLO Mission

What Happens in Jhal, Does not Stay in Jhal

Bugatti Veyron nightmare is a speed braker in India