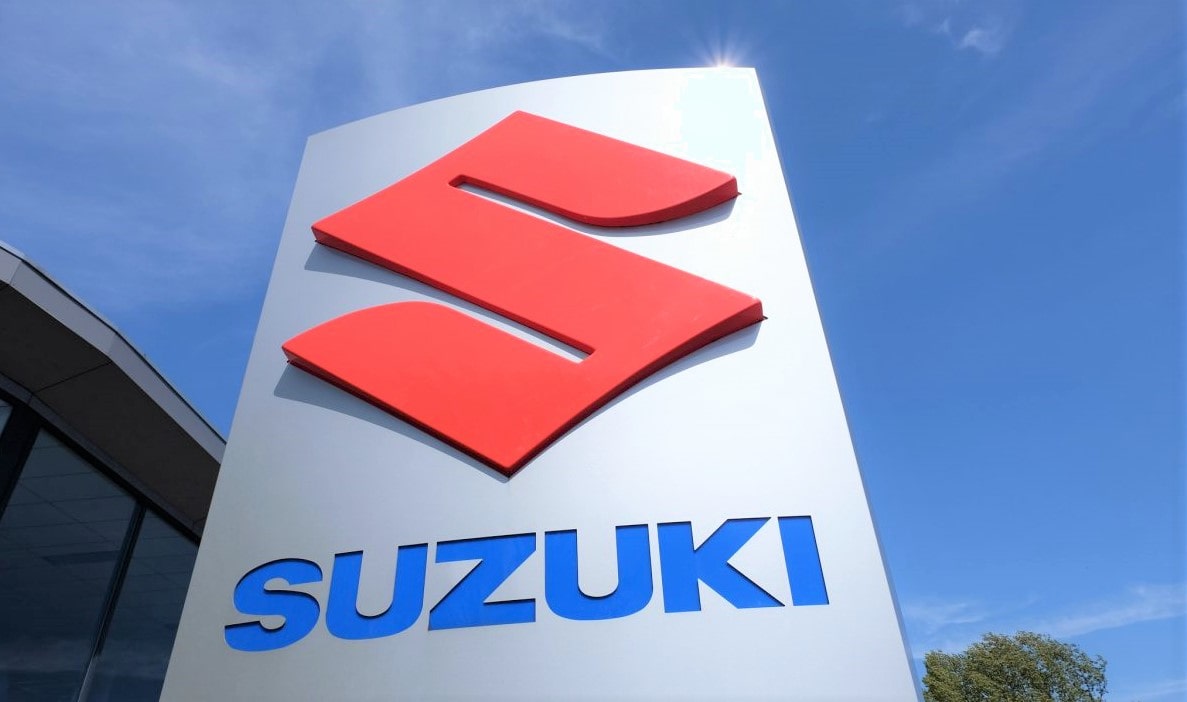 The auto sector of the country didn’t perform well during 2019 owing to several reasons, including economic crisis and inconsistent policies of the government. The auto industry did see several new cars from the new players in the market, but the sales of these cars, as well as from the existing manufacturers, remained considerably low. The sharp hike in the value of the US dollar against Pakistani Rupee blew away the local industry as it directly resulted in a massive increase in car prices. The government then imposed several additional taxes and duties that led to a prolonged struggle for the auto sector. The sales went down drastically in the second half of the year 2019 for the existing automakers in the country. The ongoing fiscal year 2019-20 has only seen a declined graph of car sales for the past five months. Pak Suzuki, the Japanese auto manufacturer in Pakistan, is a dominant player in the entry-level and mid-range hatchbacks. The automaker has performed comparatively better than the other high-end car makers in the country, including Honda Atlas and Toyota Indus. The main highlight for Pak Suzuki during 2019 has been the introduction of the 660cc Alto, which has also contributed majorly to the overall sales of the company during the current fiscal year. Let’s have a look at the performance of Pak Suzuki during 2019 as compared to its corresponding period last year.

As mentioned earlier, Suzuki Alto has driven the sales of the company during the June-November period of this year. In only six months of its production, the company has sold more units of Alto than any of its other cars during the entire year. The company sold 21,643 units of Alto in this period. In terms of sales, the second on the list is the 1000cc hatchback Wagon R. During the January-November period, the company sold 19,872 units of Wagon R, but its sales suffered a massive reduction of nearly 30% as compared to last year. Its sales dropped ever since the automaker launched Alto in the local market. The minimum drop in the sales was observed in the Suzuki Cultus. Its sales declined by 10.42% on year on year basis. Pak Suzuki only managed to sell 3400 units of Suzuki Swift throughout the year as compared to 4929 units during 2018, down by more than 31%. The sales of Bolan and Ravi also remained low by more than 32%. Overall, the company’s sales plunged by 18.57% during 2019 as compared to last year. Note here that all the sales stats in this story are taken from the website of PAMA. See the table below for complete details of Pak Suzuki’s sales.

Suzuki Alto was introduced back in June 2019, and since then, it has been a top performer in the local market primarily due to the lack of options for the consumers. It also affected the sales of the company’s former top-selling Wagon R, which now costs more than PKR 1.5 million for the base variant.  The automaker sold 21,643 units of Alto from June to November 2019. For each month in this period, the sales of Alto remained more than the combined sales of all other models of the company, which shows it performed exceptionally well. It is worth mentioning that the 660cc hatchback replaced the iconic Suzuki Mehran, and so far, it has not made the company feel the void created by Mehran.

Suzuki Mehran was finally discontinued in the first half of 2019 after three decades of production in the local sector. Therefore, its sales went down instantly after that, and currently, the units available in the inventories are being sold only. For the above-mentioned reason, its sales compared with the previous year won’t be fair as it was in production during 2018. However, the month-wise sales stats for Mehran are given below. 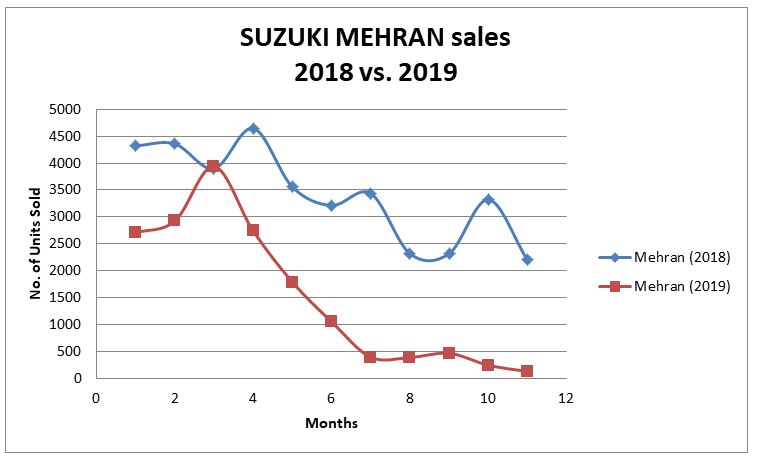 Suzuki Wagon R has definitely lost its charm in the local sector and understandably due to the introduction of 660cc Alto by the company. From January to June this year, the sales of Wagon R generally remained on the higher side as compared to last year. But ever since the launch of Alto in June 2019, Wagon R became a hard-to-sell product for Pak Suzuki. The sales of Wagon R were largely supported by its utilization in the ride-hailing services, which is now taken over by the new entrant, Alto. Also, the imposition of Federal Excise Duty (FED) by the government raised the prices of locally manufactured cars. Due to this, Alto replaced the price bracket of Wagon R and became a popular choice for the consumers. Since July 2019, Wagon R is facing a massive drop in sales by more than 70% every month. Overall, the company sold only 19,872 units of Wagon R this year so far as compared to 28,406 units last year, down by 30%. 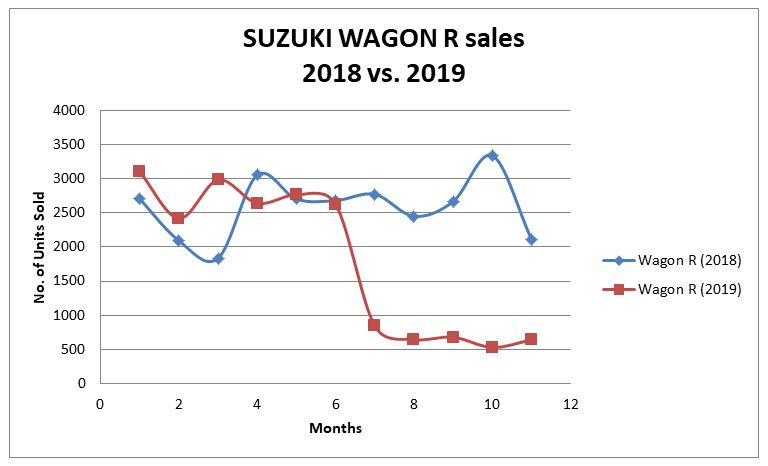 Suzuki Cultus didn’t perform too bad in the first half of 2019, but again, the imposition of FED and devaluation of rupee against the US dollar affected its sales in the second half of the year. The company sold 2000 units on average in the first five months of 2019, but since then, it has failed to cross 1300 units. During October and November, the sales of Cultus have dropped by nearly 51% and 41%, respectively. Also, the company sold only 914 units during November 2019, which is also its lowest ever monthly sales for the past two years. The automaker sold a total of 17,697 units of Cultus during the January-November period of 2019 as compared to 19,757 units last year, down by just over 10%. 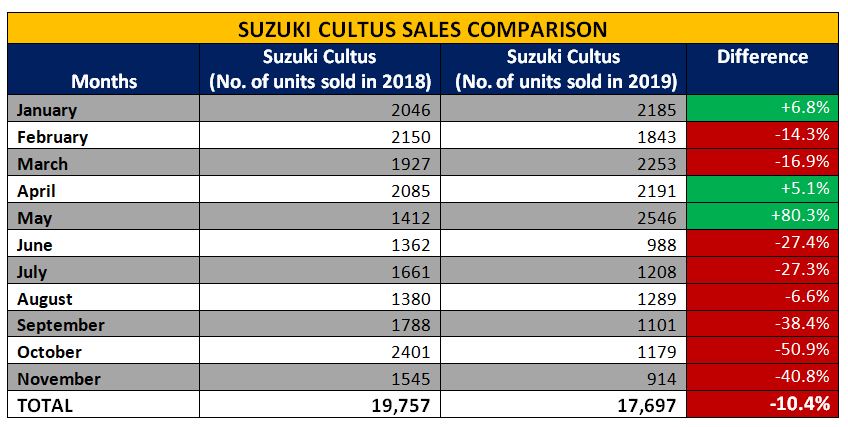 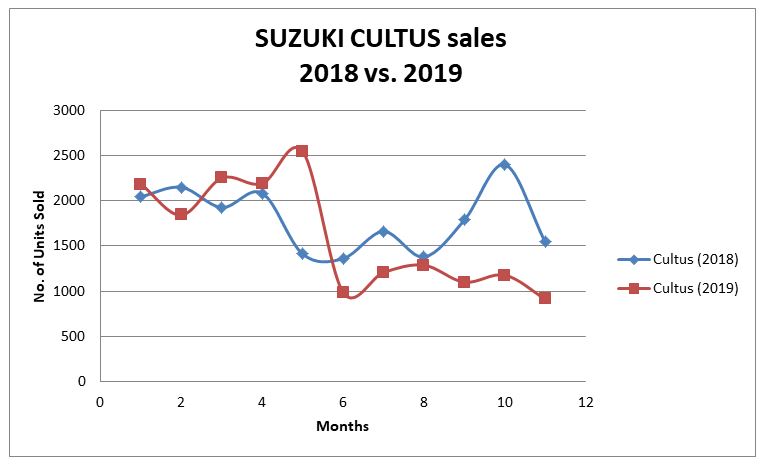 A similar trend was observed in the sales of Suzuki Bolan as its sales saw a steep decline from July 2019 onwards. The vehicle only sold more units in March 2019 on year on year basis. Otherwise, its sales remained low throughout the year, particularly in the second half of the year. During October 2019, its sales plunged by as high as 75.6% as compared to the same period last year. The overall sales of Suzuki Bolan decreased by 35.4% in the period under review. 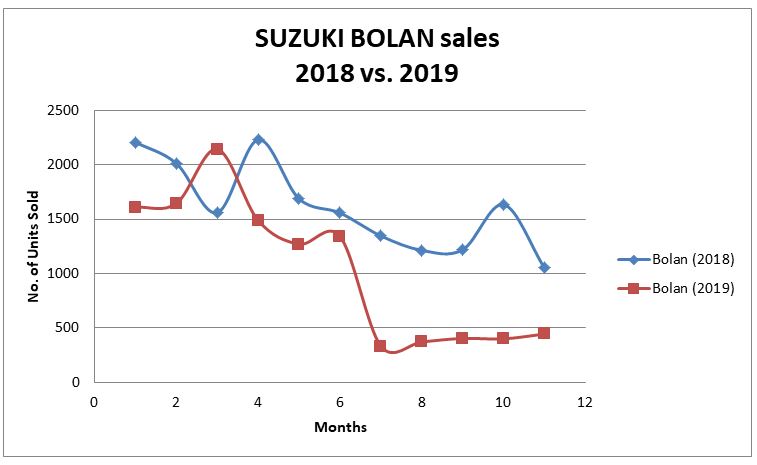 The company’s locally manufactured light commercial vehicle Ravi was also among those suffering from sales this year. Its sales went up during March and June 2019, while the rest of the year recorded a considerable decline in sales numbers. During August 2019, the company sold just 322 units of Ravi, lowest ever in the last two years. Similarly, a drop of nearly 81% was recorded in its sales during October 2019. Overall, the auto manufacturer managed to sell 11,976 units of Ravi in the 11 months of 2019 as compared to 17,862 units in the same period during 2018, down by nearly 33%. 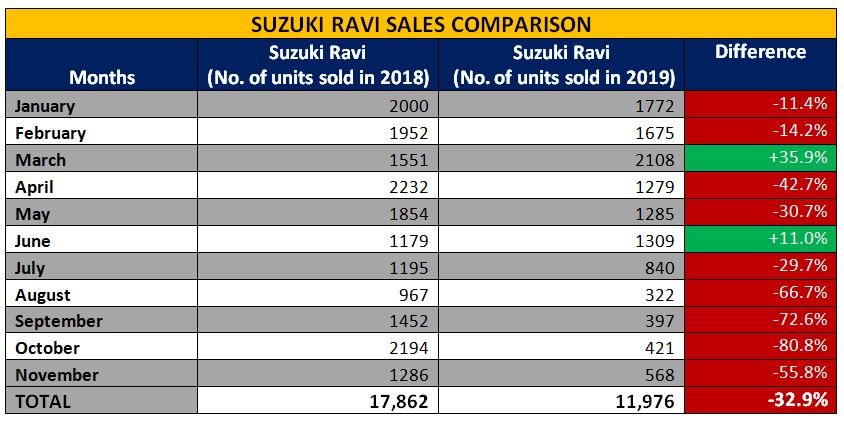 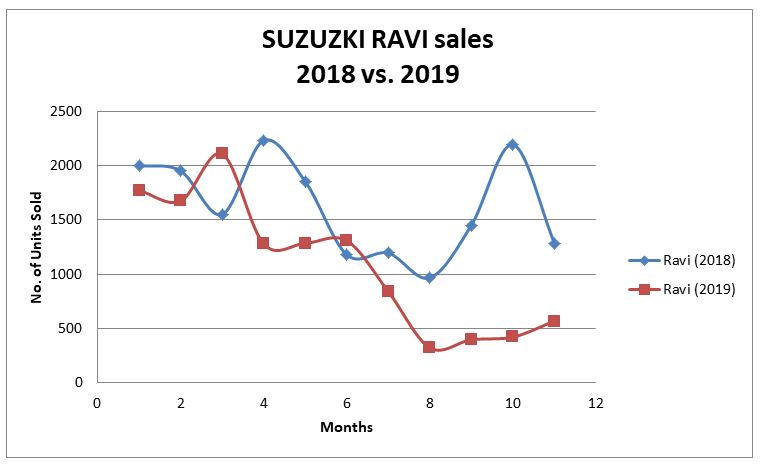 Suzuki Swift is the company’s sluggish-most model in its lineup for a few years now. Pak Suzuki has not sold more than 562 units of Swift in a single month for the last two years. The automaker’s luckiest month in terms of Swift was June 2019 when it achieved this number and recorded an increase in its sales by nearly 60% as compared to the same period last year. Ever since the 5% FED was imposed on Suzuki Swift in July 2019, the auto manufacturer has failed to sell even 200 units of the 1300cc hatchback. The sales of Suzuki Swift have rather been in the free-fall state since then, as it posted an overall decrease of 31% in its sales for the current year. Pak Suzuki has sold 3400 units of Swift from January to November this year as compared to 4929 units in its corresponding period last year. 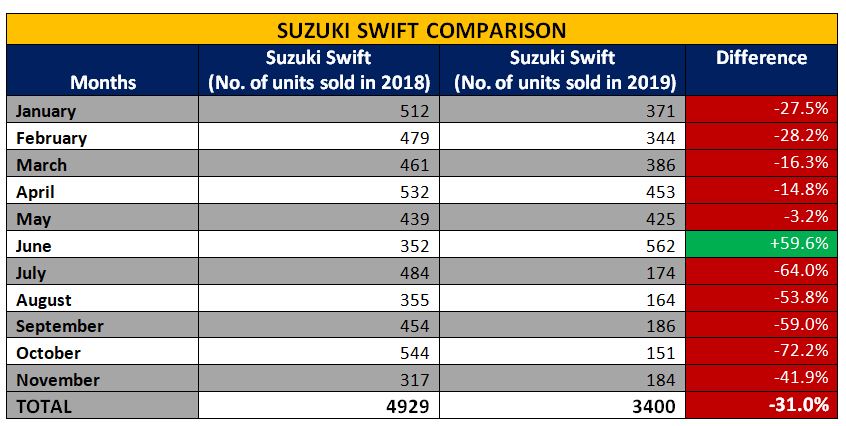 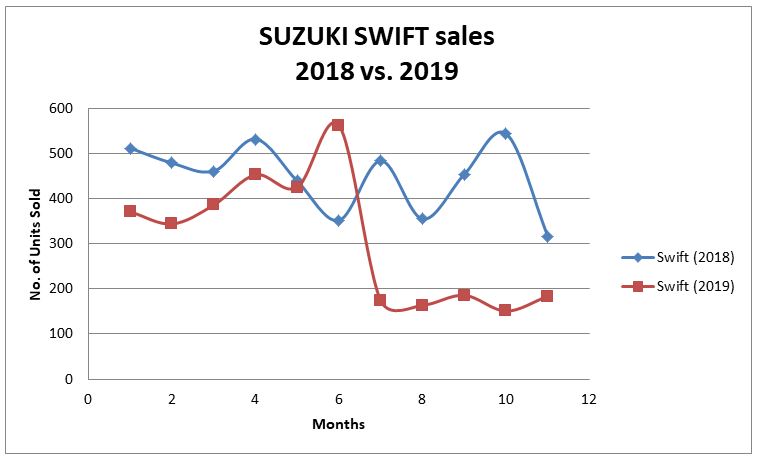 Contribution of each model in the overall sales of Pak Suzuki:

In terms of locally manufactured cars of Pak Suzuki, the major contribution in the overall sales of Pak Suzuki during 2019 was from the 660cc Alto. It contributed 21% of the overall sales of the company, followed by Mehran with 16%. However, due to discontinuation in the first half of 2019, it went through a contribution decline of 14%. The sale contribution of Wagon R also went down by 2% on the back of the high sales of Alto. Apart from the rest of the existing cars, only Cultus managed to increase its sales contribution in 2019 by a slight margin of 1%. The complete details can be seen in the chart attached below. 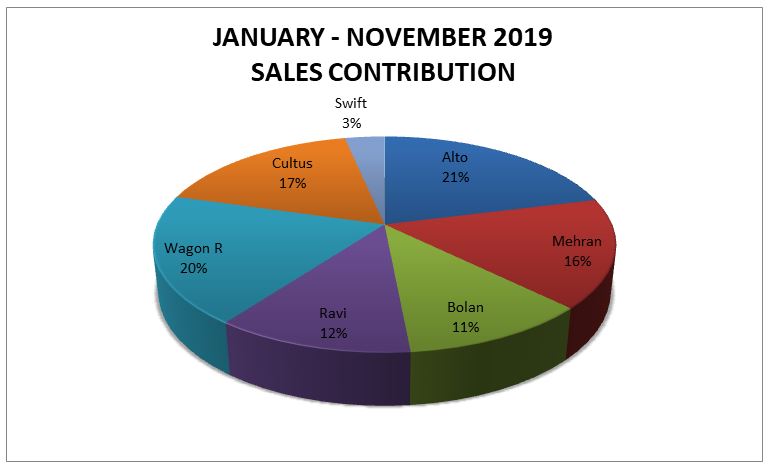 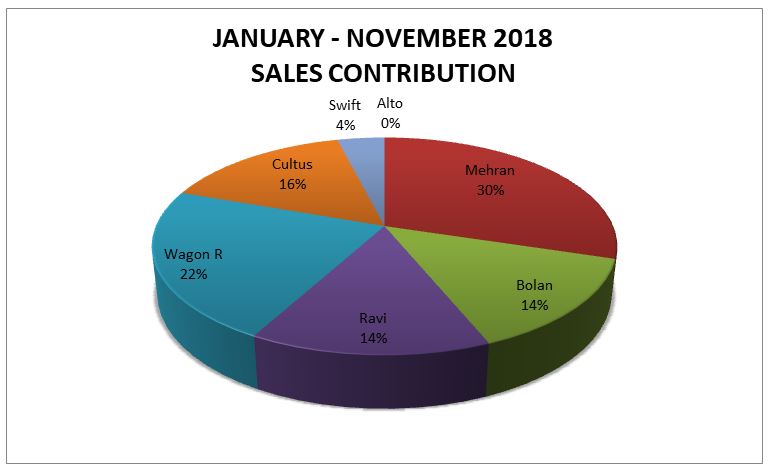 On the other hand, Pak Suzuki has already announced an increase in the price of its vehicles from 1st January 2020. This price revision excludes Suzuki Cultus for which the automaker has decided to retain the price. This might be due to the presence of KIA Picanto, which is its direct competitor in the local market. Apart from the AGS variant of Wagon R, what do you think Pak Suzuki will bring for its customers in the next year? Will the company’s sales revive with the change of the year? Let us know your opinion in the feedback section. Stay connected with PakWheels for more statistical recaps from 2019.