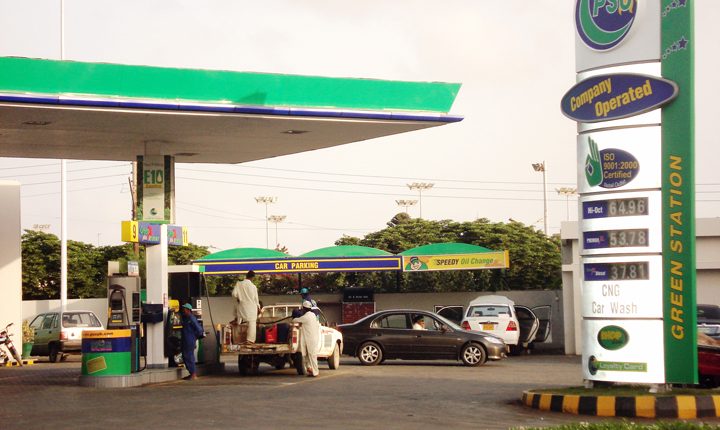 Pakistan State Oil (PSO), the leading oil marketing company of Pakistan, has posted its financial results for the first half of the ongoing financial year 2019-20 in which it recorded a profit after tax (PAT) of Rs.6.4 billion.

According to the details, the oil marketing company held its meeting of the Board of Management (BoM) on 18th February 2020 in Karachi to review the financial performance for the half-year period ended on 31st December 2019. In its corresponding period in the previous year, the company posted a profit of Rs.4.2 billion. As per the company, it has achieved these results by enhancing consumer experience and offering customer-centric plans. In this economic slowdown period, PSO remained focused on its strategic priorities. However, PSO’s financial cost increased in this period by 70% from Rs.3.85 billion to Rs.6.54 billion. The financial report revealed Earnings per Share (EPS) of Rs.13.71 as compared to Rs.9.05 in its corresponding period in the previous year. The operational profits of PSO stood at Rs.17.2 billion as compared to Rs.11.1 billion during the same period last year. Take a look at the official notification of the leading oil company; it sent to Pakistan Stock Exchange Limited (PSX). 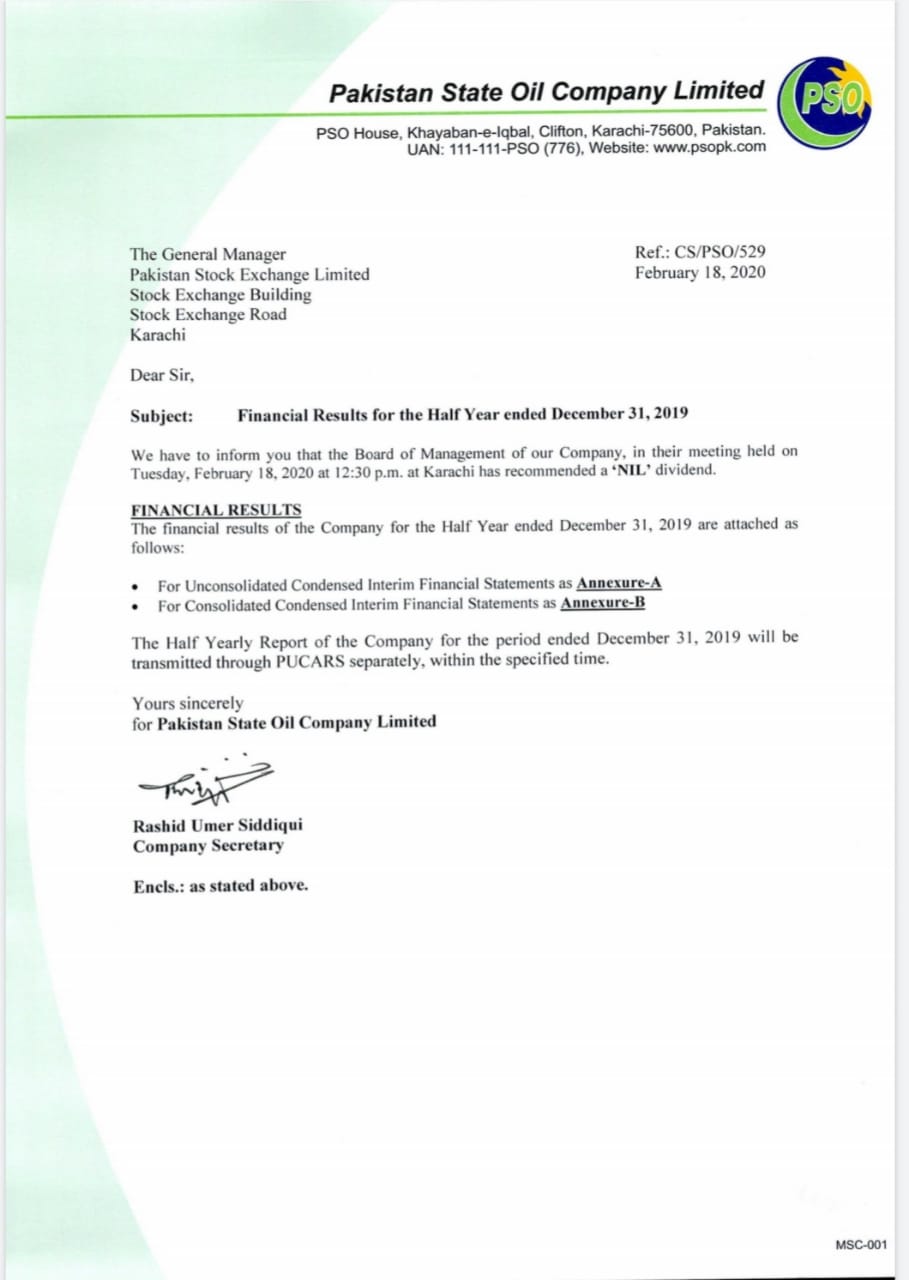 In the quarter from October to December 2019, the company posted a profit after tax of Rs.2.90 billion. Similarly, the net sales of Pakistan State Oil (PSO) were recorded at Rs.642 billion during the July to December 2019 period against Rs.572 billion in the previous tenure, an increase of 12.2%. The cost of products sold by PSO also went up to Rs.624 billion against Rs.556 billion in the same period last year. As a result, the gross profits of the oil company stood at Rs.17.6 billion in the half-year period ended on 31st December 2019.  The other income of the company was recorded as Rs.6.97 billion as compared to Rs.2.65 billion in its corresponding period last year. The turnover of PSO at the time of reporting these financial results was standing at 4.6 million shares. Also, the outstanding receivables of the company from PIA, SNGPL, GENCO, etc. were recorded at Rs.306 billion. Nonetheless, the company regained market share and showed volumetric growth in this period from July to December 2019. Also, the company outperformed the rest of the industry by a significant margin. See the complete details of the financial results of PSO for the period starting on 1st July 2019 and ending on 31st December 2019. 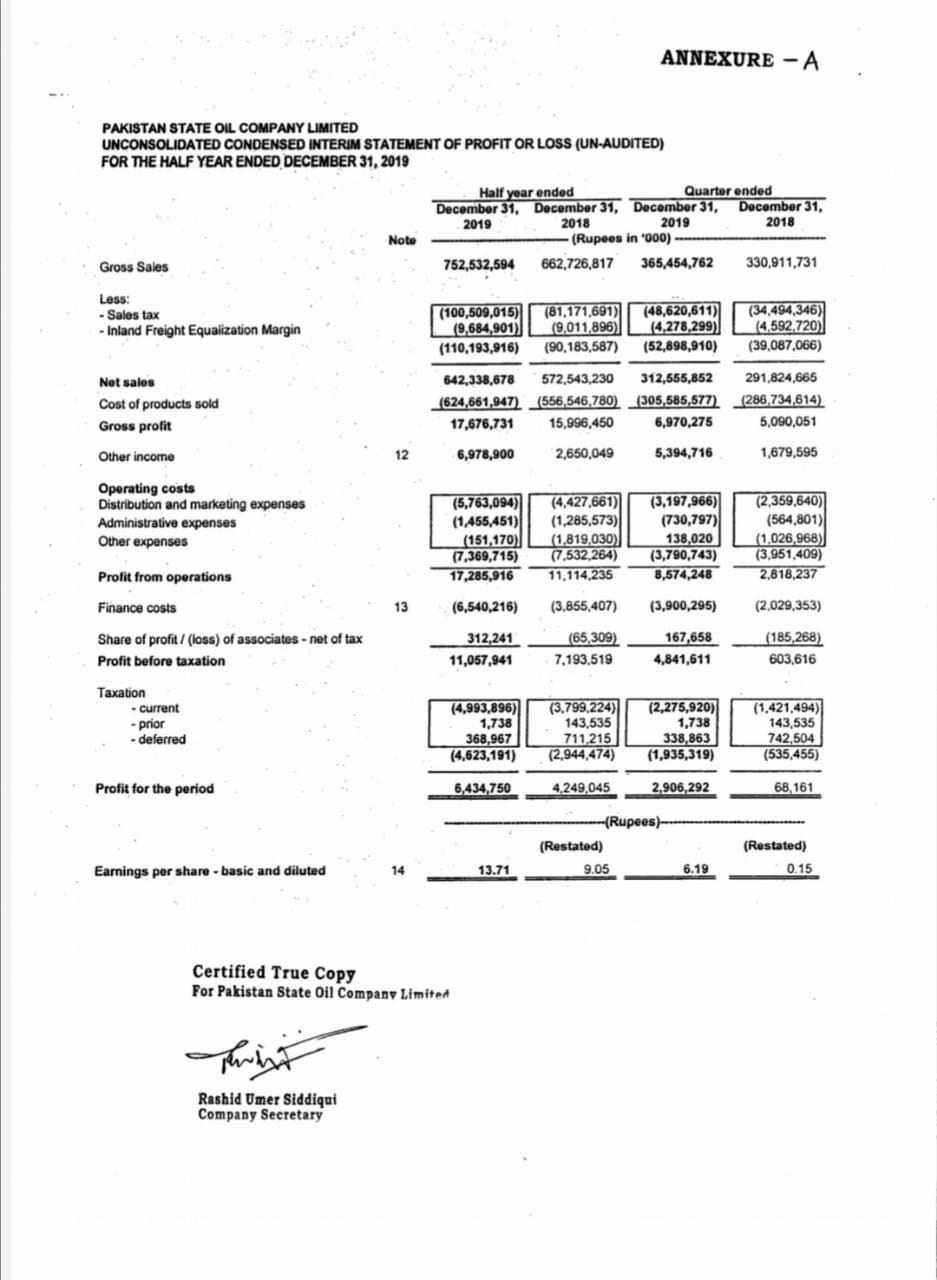 Share your thoughts in the feedback section and stay connected with PakWheels for more statistical updates related to the automobile industry.

Atlas Honda increases the price of its bikes for March 2020