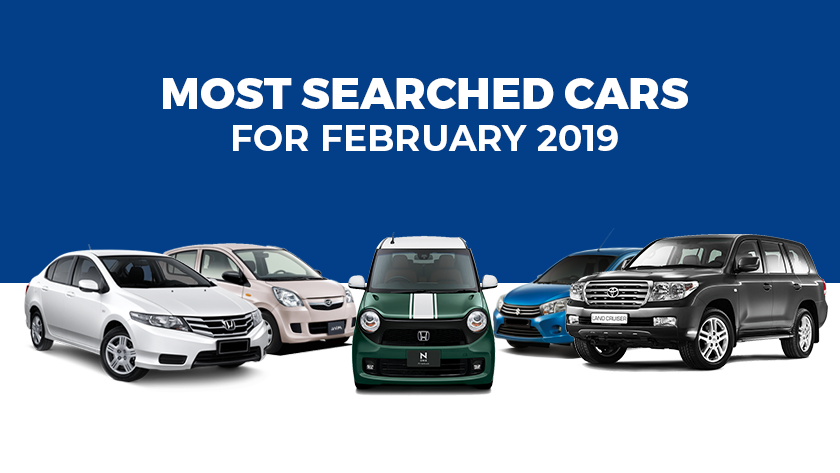 What were the most searched cars on PakWheels.com for February 2019?

People in Pakistan typically search for a whole variety of cars, both locally manufactured as well as imported cars of different engine capacities, and the month of February 2019 was no different.

Among the top searches for used cars, Toyota Land Cruiser, Honda City, Civic, N One and N Wgn, Daihatsu Move, and Suzuki Swift, Alto, Cultus, and Mehran were particularly looked up by people. Honda N Wgn became the centre of attraction for many as there was an increase of 20.58% in searches for this vehicle from January 2019 to February 2019. Among the top searched bikes for the month of February 2019, Yamaha YZF R1, YZF R6 and Honda CG 125 are worth mentioning.

Among the 660cc engine capacity passenger cars, Suzuki Alto, Jimny and Wagon R and Daihatsu Mira were top searched cars on PakWheels website. It is interesting to note here that this trend has not changed at all from January 2019.

In the 1000cc engine capacity passenger cars, Suzuki Cultus, Alto and Wagon R and Toyota Vitz took the lead. Interesting, this trend, too, has not changed at all from January 2019.

Top searched hatchbacks searched on PakWheels for the given period were Suzuki Mehran, Alto and Wagon R and Cultus. In short, Suzuki had no competitor in this category for the entire month.

All in all, the search trends remained similar compared to the search trends in January 2019. Surprisingly, new Chinese entrants have not made to this list yet. However, this trend may change in the coming months.

What to expect when you visit Hyundai’s digital showroom?