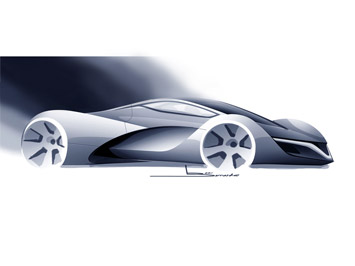 How can creases in a sheet of metal evoke emotions usually reserved for adoring human forms? You are walking down the street and this sculpture of industrial design, clad in pearl white, catches your eye. The more you look at it, the further it engulfs your senses. You walk closer and put your hand on it, as if trying to connect to its soul. You close your eyes as feeling of euphoria slowly engulfs all of you. A moment latter, you find yourself sitting on the driver’s seat, looking at the road winding through a pasture as far as the eye can see. Your right foot issues the command to march forward and in a blink of an eye you become one with the car.

In a world full of pop culture influenced and focus group derived ugliness, there are vehicles designs that are nothing short of sublime. Some are more functional than others even more practical but they all break the mold of monotony by pleasing all of your senses. It doesn’t matter that you need more money than god to afford one of these moving sculptures, what really matters is that you were truly inspired by a machine. A form generally considered to be utilitarian rather motivational.

Automotive designers take cues from organic forms to arrive at a shape that not only looks natural but also feels the same. Sometimes these shapes mimic the fluidity of liquids; other times the curves of a vivacious female body. Most automakers let their designers translate their vision into art objects, presented in auto shows around the world, with very little subjective control. We get to see machines that exist only as design exercises, knowing full well that they will never be transformed into production models and yet we choose to form polarizing views.

Production models produced in large volumes and meant for a large segment of the population are generally designed considering market research based primarily on input from different focus groups. How impersonal; soul of such vehicle is borrowed from a notion that a broader appeal is what makes a design more personal. More vehicles sold translates into a success for a certain model, regardless of the fact that it resembles almost every other vehicle in that segment whose design is also based on the very similar and extremely impersonal process. Then, there is that one stand out. The one that makes you look again, with gleam in your eyes and heartbeat racing. Your soul connects, your thoughts merge and you want it more than your first everything. The designer of that machine just ascended to being an artist rather than an engineer.

There are many automobiles in this world that enjoy cult following. It is not because they are too exclusive, too expensive or over the top in performance. Designers of these vehicles understood how to transform a soulless machine into something more tangible, something that connects with you in unquantifiable dimensions. This ability, to transform an industrial object into something this personal, is becoming a lost art with every new launch of a cookie cutter box on four wheels. This bedazzled admirer truly hopes that humans with such mystical powers will be allowed to practice their craft for the rest of the ages.

CarArt: The summoning of Lancer in Hell!