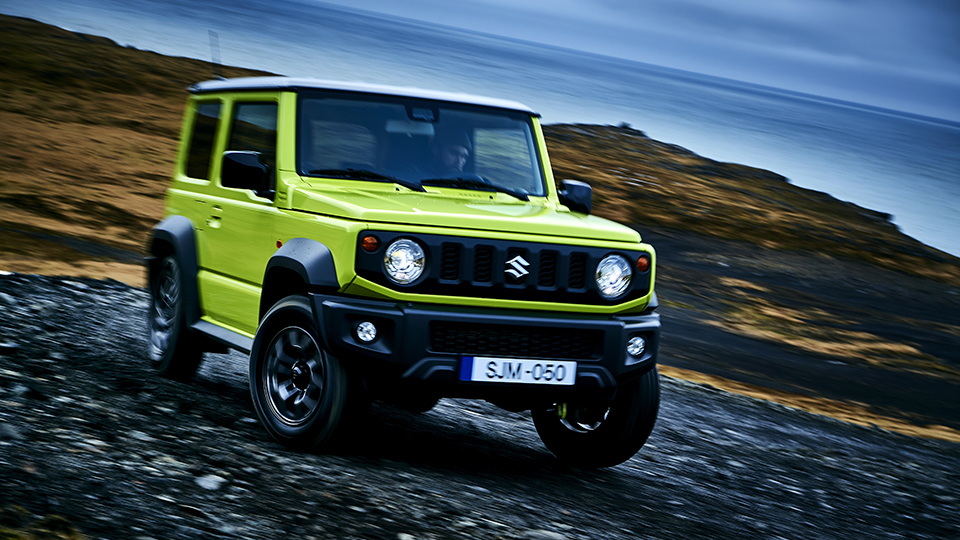 While Pak Suzuki is planning to introduce the 4th gen model of Suzuki Jimny in Pakistan in the coming months, let’s have a look at what the latest model has on offer in the international market!

Suzuki Jimny was first introduced by Suzuki a long time ago in 1970 as the first Suzuki-branded four-wheel drive light jeep vehicle. It earned high acclaim in no time with its small but powerful two-cylinder 359 cc engine. After 11 years of production, its 2nd generation was launched under 3-cylinder 550 cc and 660 cc bigger engines with a longer and wider body in 1981. It was well received by the market for almost 17 years before the auto manufacturer decided to launch the 3rd gen Jimny with a higher level of comfort, longer wheelbase, greater stability, and rigid suspension. Its production continued for two decades with high-level of acceptability around the world. Finally, Suzuki Jimny entered into its 4th generation model in 2018 when it was first launched in Japan on 5th July. It has a unique retro style combined with a boxy design language. After a year of production in the global market, Pak Suzuki is all set to bring it in the local market to replace the older generation. As of March 2018, the worldwide cumulative sales of Suzuki Jimny have reached to 2.85 million units in as many as 194 countries and regions. The 4th gen Suzuki Jimny offers a lot to discuss as we will try to cover all its aspects in this article.

Suzuki Jimny 4th gen comes with a robust 4-cylinder 1.5L K15B petrol engine with 16-valves. With an engine capacity of 1462 cc and multi-point injection fuel distribution, the vehicle produces a maximum output power of 75 kW at 6000 rpm and a maximum torque of 130 Nm at 4000 rpm. It delivers powerful off-road performance with the bore and stroke of (74×85) mm. The 3-door retro-styled jeep possesses a 5-speed manual and 4-speed automatic part-time 4WD (ALL GRIP PRO) transmission. The unrivaled agility and rigid ladder frame of Jimny allow you to explore the off-road adventures with higher performance and improved fuel efficiency under a solid foundation. Its 4WD also offers low range transfer gear in which shifting to 4L mode helps you in the off-road traveling with maximum torque and traction.

Suzuki Jimny has a 3-link rigid axle suspension with coil spring in both the front and rear side. The full-width rigid suspension is a great tool to ensure superior grip on all types of surfaces. This type of suspension helps in keeping maximum contact of all tyres with the rough surface of the ground for improved stability and control. It has solid disc brakes at the front wheels and drum brakes on the rear end thus helping in optimum performance.

The gross weight of Suzuki Jimny is 1435 kg whereas its minimum ground clearance is 210 mm. It has a minimum turning radius of 4.9 m whereas the wheelbase is 2250 mm. The overall length (bumper to bumper) of Jimny 4th gen is 3480 mm while the height and width of the jeep are 1720 mm and 1645 mm. The part-time 4WD vehicle has a seating capacity of 4 persons with a luggage capacity of 377 litres when the rear seats are folded. It can store up to 40 litres of fuel in its tank.

Suzuki Jimny inherits its design from its previous model and restores the heritage. The 4th gen model has a clamshell bonnet and a horizontal slit-like design. The front radiator grille has vertical openings accompanied by simple yet distinctive round headlamps with independent indicators. The LED headlights come equipped with washers thus help driving in muddy and dirty conditions. The front and rear bumpers are optimized with angular edges which provides enough clearance for the wheels while driving through obstacles. The tyres have significant black colored safeguards which protect the body from scratches. The round-shaped fog lamps are embedded in the bumper. The rear end of Jimny is equipped with rear combination lamps placed at the rear bumpers. The standard tyre size of the 3-door jeep is 195/80 R15 and a spare tyre is also attached at the back end of the vehicle. The square-shaped side mirrors are black in color. 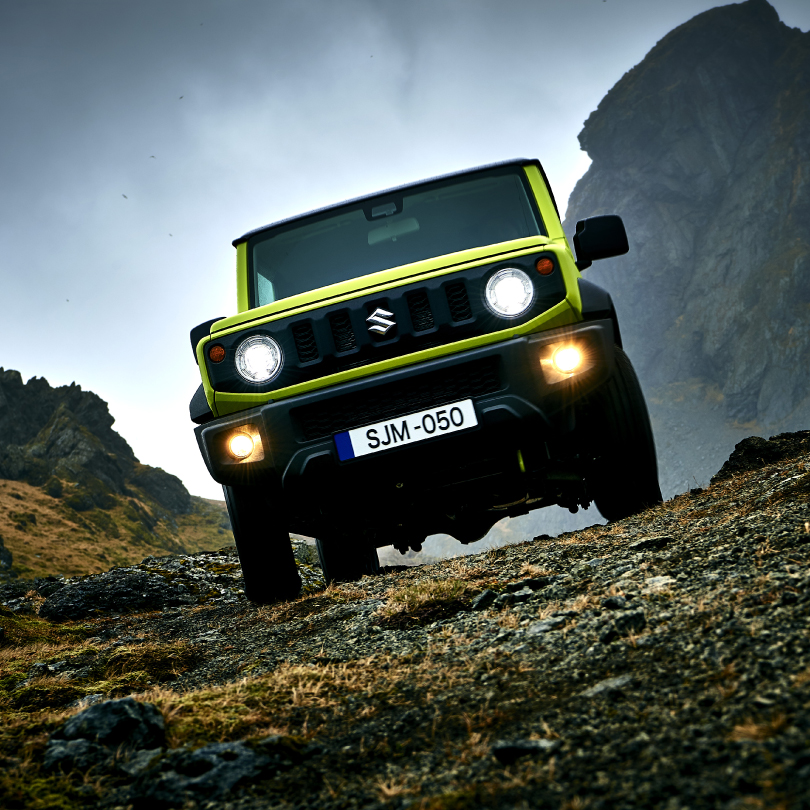 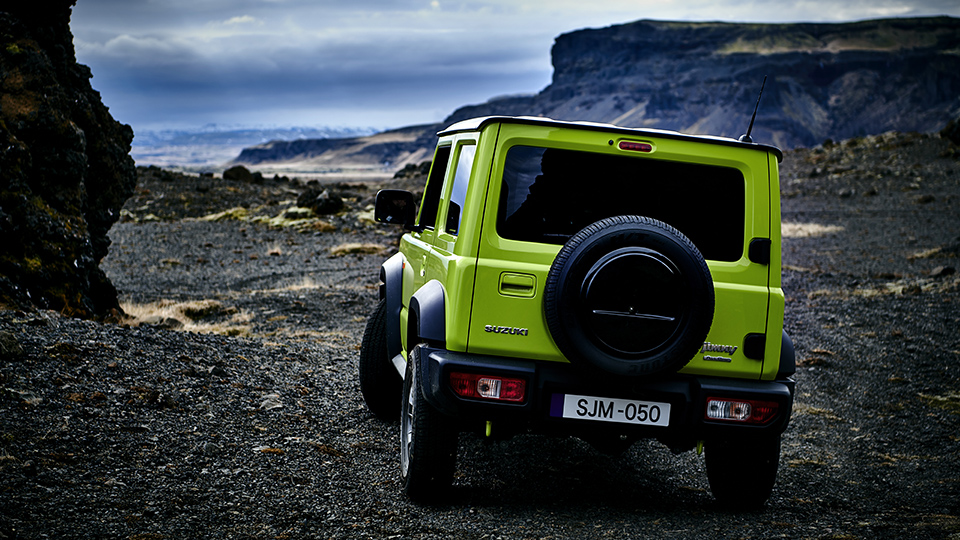 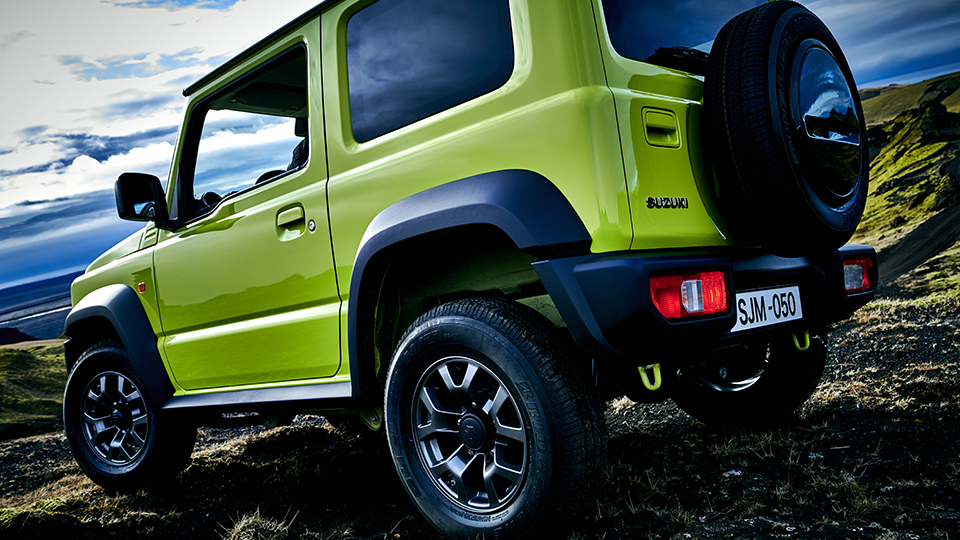 It has a stylish black interior with minimal distractions and elegantly crafted controls all around. However, the details are quite attractive with a red-tone of the instrument cluster and control knobs lighting. The cabin is also much more spacious than its previous models with highly improved comfort and convenience for the passengers. There is ample space for storage in every corner of the cabin along with several cup holders and mobile storage compartment. The centre air-vents are rectangular in shape while the corner vents are round with a silver stripping. The steering wheel also has several multimedia controls for the ease of the driver. A touchscreen infotainment system is embedded in the middle of the dashboard area that offers easy access from the driving passenger’s posture. Furthermore, a USB charging port is also provided to help you keep your devices charged during the journey. The down to earth design language of Suzuki Jimny has enough storage space for the luggage to easily meet your needs while exploring the off-road adventures. The foldable rear seat increases the space for luggage considerably. 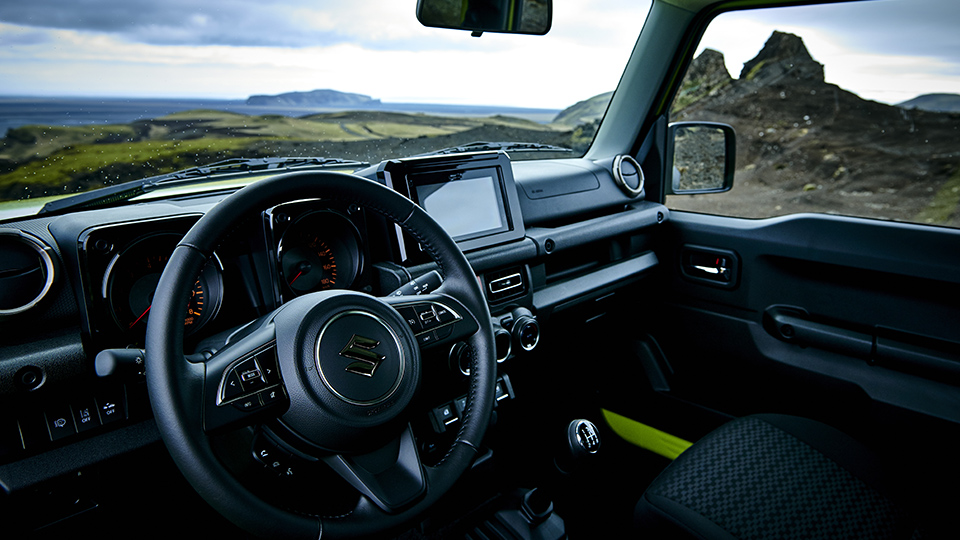 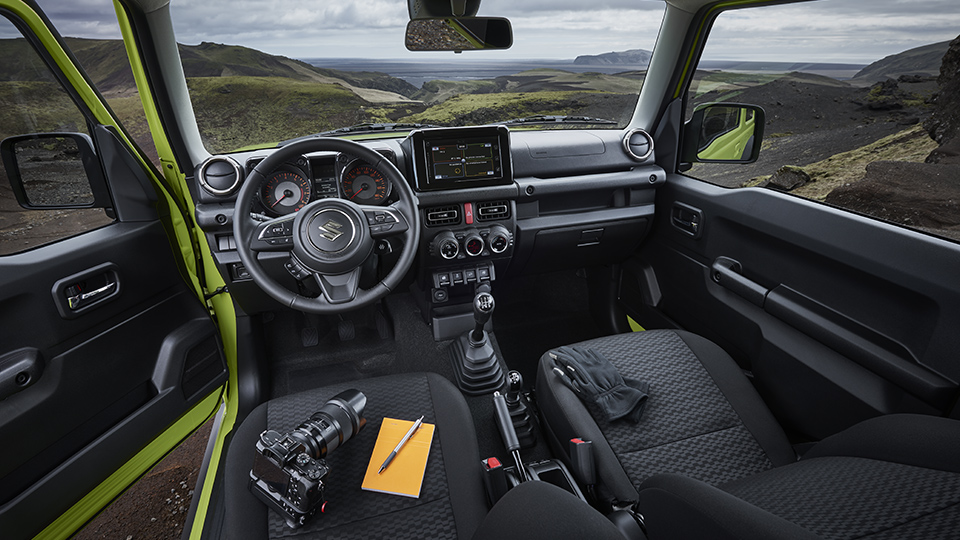 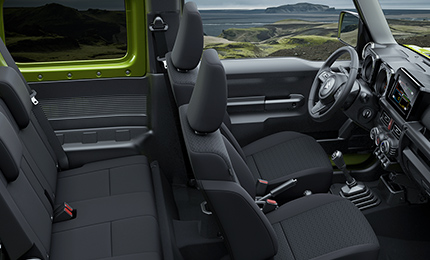 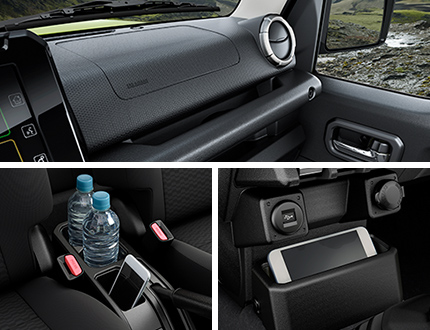 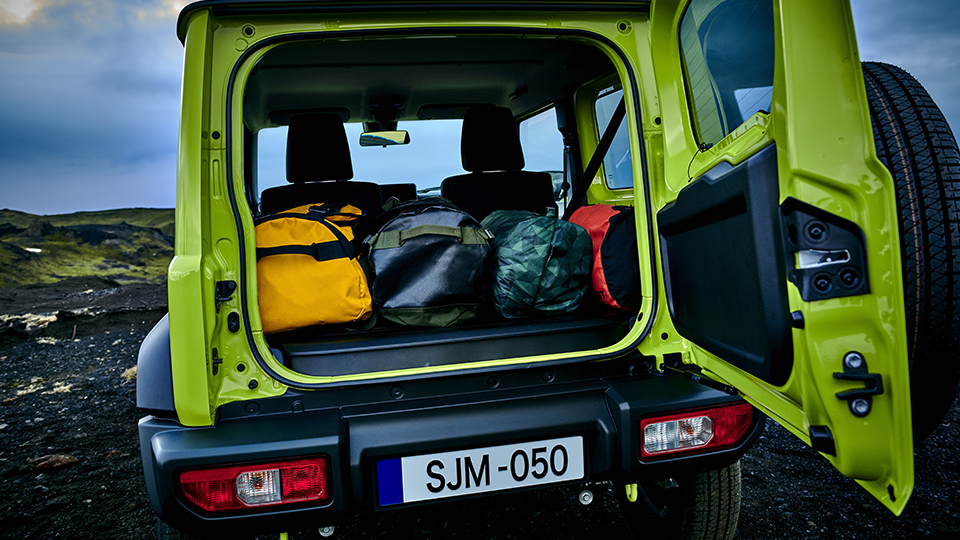 Considering it an off-road vehicle, safety becomes an automatic priority and Suzuki has lived up to the expectations of the consumers. Seat belts are provided as a basic safety feature for all the passengers sitting on the front and the rear seats. Suzuki Jimny has a brake assist feature that uses two sensors i.e. monocular camera and a laser sensor to determine any risk of collision with the vehicle or a pedestrian in front. The system alerts the driver through an audio and visual warning. In case of an increased amount of risk, it deploys brake assist feature to increase the braking force. When the risk of collision becomes too obvious, it applies strong automatic braking thus working as an enhanced safety feature for the driver and the passengers. It also has a high beam assist feature which is very useful these days for the safety of all commuters. It detects the lighting environment and the presence of light from oncoming vehicles and automatically shifts the beam to a low level. Once there is no oncoming vehicle and the environment is dark, it switches back to high-beam. It further helps the driver to stay on track with the help of lane departure warning. If the vehicle moves away from the lane, the steering wheel vibrates and also issues a visual warning to alert the driver instantly. It also has a traffic sign recognition feature through which the system detects traffic signs and displays them on the meter.

Suzuki Jimny has a brake LSD traction control system which is designed to automatically brake in case of slipping wheels and help in redistribution of torque to the wheels. The hill hold control helps to prevent backward rolling while driving on a steep uphill track. It also has a hill descent control system which helps in automatic braking and maintaining a constant speed while going down a slope. Both of these features help in focusing on controlling and accelerating the vehicle rather than worrying about anything else.

Expectations regarding its launch in Pakistan:

The 3rd generation of Suzuki Jimny currently available in Pakistan is unfairly priced considering the offered features in the vehicle. It has a 1328 cc petrol engine which comes in a 5-speed manual transmission that can produce a maximum torque of 110 Nm. Apart from the air-conditioning feature it hardly possesses any other basic luxury or safety feature. This is the reason why it’s overpriced at Rs.26.18 lac in the local market among other vehicles in this segment. However, the consumers will be expecting much more from Pak Suzuki when it introduces the 4th generation in terms of more features and competitive price tag. We will have to wait and see what the auto manufacturer offers in its latest release. What are your expectations regarding the 4th gen model of Suzuki Jimny? Let us know in the comments section below and stay with PakWheels for more updates on the automobile industry.

Porsche Taycan launched with a starting price of $150,900