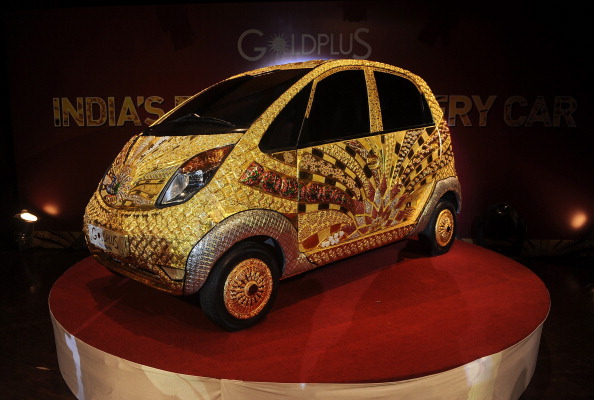 Tata Nano is now the world’s most expensive smallest car

Car customizers and individuals have done some awry things to cars which made them infamous but this time, Tata has now built a gold-encrusted Nano worth $4.6 million as a publicity stunt.

Tata Group on Monday unveiled a Nano car – made with gold and silver, and studded with precious stones – worth more than US $ 4.6 million. Tata says the car is not for sale and will be displayed around India in its showrooms which could use its help, since after setting targets to sell 250,000 Nanos a year, Tata moved about 1,200 in August.

The car’s body is made with 80 kg 22 carat solid gold, 15 kg silver, precious stones – including diamonds, rubies – and other expensive gemstones, the official said.

“As many as 14 techniques of jewellery making have gone behind the effort — from the intricate filigree work to the delicate and colourful meenakari work, the stunning kundan to the traditional naqashi…marking the convergence of diverse and culturally distinct jewellery making techniques from around India,” the official told IANS.

Titan Industries managing director Bhaskar Bhat said that since eternity, jewellery made with gold and precious stones has been an integral part of the Indian woman’s life.

“Indian jewellery has been an epitome of innovation and creativity, and carved a niche worldwide for itself for the intricacy of the designs crafted out of the precious metals and stones,” said C.K. Venkataraman, COO, jewellery division.

Jenson Interceptor to be made again, thanks to Top Gear