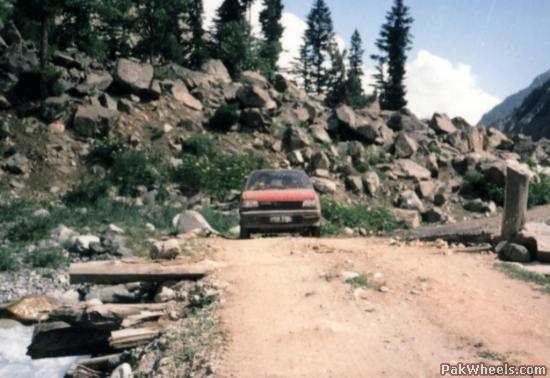 The legacy of Suzuki Mehran

When I heard Mr. Ratan Tata present the Nano, I was bewildered to hear that the rich bloke care about the people so much that he built a car just for them. But Mr. Ratan Tata you aren’t the first person who took the oath to provide a car to the people all around the world riding on 2-wheelers that shall work as a protector from; the scorching rays of sun, the rain, the dust and the rich-blind-drunk-drivers who want to kill you.

It all began for our part of the world with the cycle, your wife or son or mother or even your khala holding a big umbrella at the back of your cycle covering the heads of both. But that does not do the job, you’re still exposed to dust, rain, mud, noise and the worst of all, you do not have any speed. I’d rather consider walking over riding my wife somewhere on a cycle if I had one. But we had to ride it, primarily because we did not have money, neither do we have that now but who cares. In the era of love-making when our Politicians did not know what population crisis is, the concept of going on long-drive in the monsoon-rains or the sunny afternoons or sleepless warm nights with your beloved didn’t exist which then gave birth to population crisis.

So then we had some kind Japanese clean shaved men come down to the City of Karachi or as better of us know it as, ‘City of no-lights’ located in the ‘Country of no-lights’.  Those men had the same aim as Mr. Ratan Tata. In 1982 Awami Auto Ltd. began the production of the Suzuki SS80 or Suzuki FX as we call it and the very next year Awami Autos Limited was renamed into Pak Suzuki Motor Company Limited which in 1988 ceased the production of FX and brought in the 2nd generation Suzuki Alto which to us is Mehran(Alto) in the time when the world was witnessing the departure of second generation Mehran(Alto) that came in 1984 and left in 1988 with a new model as its replacement. However, I would like to make one thing very clear here that when we talk about new generation or new models of cars, we talk literally. The whole car including its design, safety standards, engine, fuel mileage, comfort, drive, etc are upgraded to newer technological standards. However, nothing like the aforesaid happens here, again literally.

The Mehran which we have today is one of the only cars in the whole world which to this date uses a carburetor engine. Remember the SS80(FX) I told earlier shares basically the same F8B engine with Mehran which was developed by Suzuki in the early 80’s. That very same engine to this date is used in the Mehran we have here with us. I would rather not comment on how far behind we are in terms of technology since Suzuki is not our own Automobile Industry. R.I.P AMC.

Mehran was a cheap car initially when launched in Pakistan with seats for 5 skinny folks, 4+1 gears with their lever, a steering, cheap plastic dashboard/panels, 4 tires, 2 front and 2 rear lights, a horn which is a necessity in our traffic, 2 front disc brakes and 2 rear drum brakes, windows, pair of bumpers one for the front and the other for the rear and last but not the least, The 796cc engine from the past which is a blast. I don’t know if you like the old man or not, but it is to be accepted that it is the cheapest car to keep. It did not remain as the cheapest to buy pertaining to our predicament economic situation but if the price somehow come below 0.3 Million PKR, PakSuzuki can easily evade the recession.

I hear the owners of Corolla and Civic each morning crying out in the morning and the afternoon complaining about their Side-view mirrors stolen the 3rd time and they are expensive. One has to make their children sit at home for 6 months to buy a new pair, whereas the owner of Mehran flies by in his car since he does not care whether his Mehran have them or not, seriously they don’t need it and even if they do have, then they don’t use it. But if they would like to use then it just cost 35-40 PKR only. And if your speedometer stops working, you do not need to fix them because the Mehran won’t go over 60-70 kmh in the city, now there’s no ECU limiter in here doing that. Sometimes, to fewer folks, the brakes don’t matter; working or not they are driving it. Then the hand-brake which in most of the Mehrans on the road except those who just got off the assembly line. Hand-brakes are dead hence they put it in any gear after parking.  These are the few of the things that we do not need in Mehran but are there insead of the safety feature that it needs but aren’t there. I say put them as options for the buyer and your Mehran will become cheaper. And cheaper sells today.

The ultimate attraction for the buyer is its glorious fuel mileage. I have met people who say that we fill the Mehran with fuel after a set number of days, not through how much the cars been driven or what the meter shows. How cool is that; especially for students and the folks who earn under 20k PKR/PM. Unlike your Civic or Corolla or the German tech-crazy car, assume your car broke in the mountains(Don’t doubt that it can’t go there, check the topics mentioned at the end of the articles from PW Forums) where there is no reception available for your mobile let alone the walk to find a mechanic but even if you do find one there is no chance that he would know how to fix your car unless it’s a Mehran which has become a fact in Pakistan that it is indeed the cheapest car to fix with everyone claiming to know how to fix it.

The resale value of Mehran is pretty impressive as well. Hard-cash as many would say. A Mehran in mint condition or not, will sell since there are buyers of every kind looking out for them. Stolen Mehrans, Mehrans to just buy groceries and fetch kids from the school, totaled Mehran because every (remaining) part of the car can be put to use.

We can say that one buys the Mehran as its a faithful friend due to its natural elements. The Mehran is a tool, a tool which everyone likes to keep for his matter of need. Hence the legacy of Mehran shall live on with its presence on the roads of Pakistan undisputed & justified except its price.

Pictures are taken from,’Trip to Hunza and Shandur on my Mehran‘,’My Wheels Memories‘.

PW Details the JF-17 Thunder for the layman

Part 1: How to keep your car always new – PakWheels style!