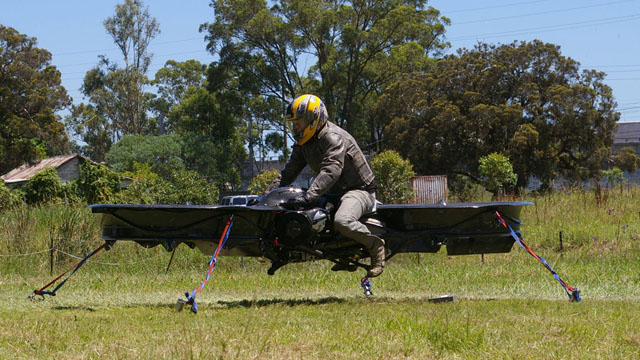 The prototype was used in the Star Wars movies and now this crazy hover bike which in every way turns out to be a direct descendant of the Speeder Bike used in the Star Wars movies. Anyone who like Star Wars will like this, well infact, everyone who believes in joy rides will like this crazy Hover bike engineered and made by an Australian engineer, Chris Malloy who used his savings to build this flying motorcycle which he named “Hoverbike” which can reach an altitude of 10,000 feet and has a top speed of 170 MPH when the project is finished.

Mr. Malloy said that the idea came to his mind after an argument about how an actual flying bike would look like. The Star Wars’ Speeder Bike is actually the creation of 3D renderings and hasn’t actually been feasible for today’s technology to build a functioning one. Therefore, Malloy used his garage and custom-built a carbon-fiber airframe equipped with 107-BHP BMW engine.

The hoverbike might not look so good for urban use however, but it doesn’t take a rocket scientist where this can come in handy especially military and search and rescue operations. With just one tank giving a journey of about 92 miles, the price of the hoverbike is pretty expensive, $ 40,000 – unless Malloy can pull around 1,000 orders annually than prices can drop.

What maybe building up here is not just a hoverbike but a racing series of the future which bring back the attention – motorsports have longed after the fallout of Group B and Senna, although, the yesterday’s Le Mans have yet to lost on its charm I am glad and hopeful that it won’t ever.