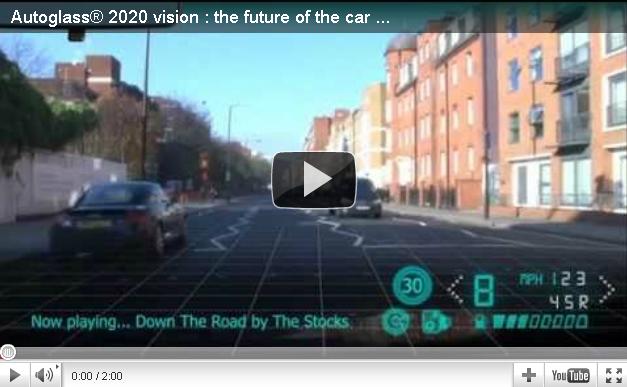 If the world survives 2012 which it will as it did survive May 21, 2011 – this is how our windshield is going to look in 2020. This windshield is a conceptual one, made by Autoglass. Who has tried to see how the windscreens in the future will look. While we all wander whether there will be Tron or peace with Transformers and Aliens, but the HUD (Heads up displays) on various cars, most notably on BMW M5 and Chevrolet Corvette ZR1 have proven this – that this windshield is possible a few years down and peace with Transformers, Predators and Aliens isn’t.

The video shows that everything for which you have to another item installed in our Pakistani cars like Navigation, music player, RPM meter, etc – all will be available on your windscreen. It also detects pedestrians and cyclists and warns you of their presence.

This is the first step towards envisioning the future and make it available for public use because if you don’t know yet, the people are just about 8-9 years late in having something like that in their cars. Meet the F-35 Demon Helmets gives the pilots, 360 degree view of the battle-field.

The helmet projects an augmented reality world inside its visor. This image is created by visualization, targeting, and situational awareness marvel called Electro Optical Distributed Aperture System, which combines the feeds from six advanced infrared digital cameras located around the aircraft and other sensors—like radar—into a seamless 360-degree spherical panorama, all in real time.

The panorama makes the plane and his body completely invisible to the pilots. Infact if he looks down to legs, he won’t see anything but the ground.

So while every new awesome technology is first made available to the military, the only thing that matters to most about your windshield is that it must be clean and lights of oncoming traffic shouldn’t glare when they hit the windscreen but what about the Google ads?