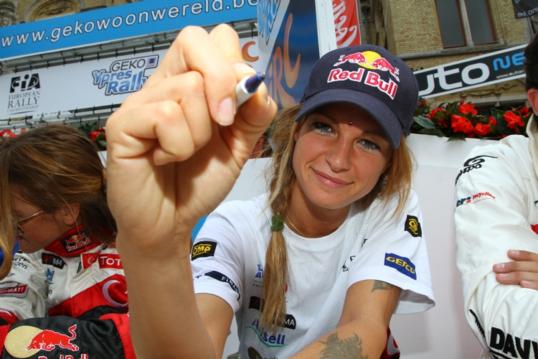 RedBull’s F1 team is leading the contructor standings in F1 racing and it also is the winner of contructor’s championship of 2010 in just the 6th year after they entered the competition. But these F1 scores doesn’t impress me as much as their X2010 or more popularly known as X1 does because that car was built to see what man can do in the field of racing when there are no rules or regulations.  Quite remniscient of the Group B rally this car – however, there’s something more appealing  then even the X1, she’s coming.

If only I knew how should we be pronouncing her name but anyways, her name is Burcu Çetinkaya, she’s Turkish, she’s blonde, she’s hot, she isn’t afraid of mud and above all, she’s into man’s greatest crush ever – rally racing.

Just like that European roof jumper Red Bull brought to jump of MCB Tower’s roof, they’re bringing this Turkish bombshell to tour Pakistan. Even though the jump ended up in disaster because the air pushed him behind the tower fortunately though, his parachute got stuck in the iron rods in the building behind saving him from tragedy.

The news is better on this one however, she’s going to race in as a guest in Autocross round 2 which is to be held on March 5, 2011 at the usual place.

Brought to Pakistan by Red Bull, Burcu Çetinkaya wil be touring our land from February 25th to March 5th. Her agenda in Pakistan is to support, encourage and promote local motorsports industry. In order to do that she’ll be touring all the top universities of Pakistan in Karachi, Lahore and Islamabad. Educating us about rally racing and most importantly, the successes of a woman in man’s playground. Well don’t tell me because Michele Mouton still looks hot to me.

She’ll also be hosting the exclusive Red Bull, Dakar Rally 2011 screening in Karachi where she’ll be the chief guest herself. A special media event will be held in Lahore where rich and famous folks will be granted a chance to compete against this three times Miss Turkey in ladies Turkish rally championship in go-kart racing.

Alongwith a lot of successes in her career, she’s three time Turkish Ladies Rally champion, Castrol Fiesta Sporting Trophy, Turkish N3 Rallye Championships in 2008 and in 2010, she became the first ever female driver to score points in IRC(Intercontinental Rally Championship).

Talking to a local magazine, apart from the usual tourist stuff she’d like to do here like eat food and know our culture, she wants to go to Tooba Masjid located in Defence, Karachi and strangely, she’s heard that Karachi’s quite famous for watersports? All I know now ladies and gentelman; please welcome the female stig to Pakistan.