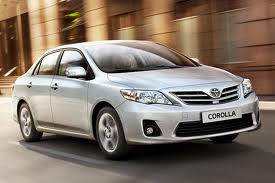 Toyota Corolla is the best selling car in the world

Latest sales figures of the first quarter of 2012 have given us the results of what cars sold the most throughout the world and as it comes as no surprise, two of the top three best-selling cars in the world are Toyotas.

During the first three months of 2012, Toyota Corolla took the top spot of the best selling car in the world with 300,800 cars sold with the Ford Focus trailing in the second spot with 277,000 cars sold and third most selling car was the Toyota’s flagship Hybrid vehicle, the Prius with 247,230 cars sold around the globe.

It is however pertinent to mention that the Prius supremacy was disrupted during last year due to it’s unintended acceleration fiasco and Japan’s Tsunami, now though, Prius has gained stability and is making headway to take back it’s place.

Sales of Toyota, Lexus, Scion, Hino and Daihatsu vehicles grew 18 percent to 2.49 million in the quarter, Toyota said in a U.S. regulatory filing this month.

That put it ahead of GM’s 2.28 million and VW’s 2.16 million, according to data compiled by Bloomberg.