Toyota has entered into a joint venture to develop hydrogen fuel cells with multiple Chinese automakers. This joint venture will be based in Beijing, China and will include a total of five Chinese auto manufacturers. Toyota already has investments in sectors like autonomous driving and electric cars in China. This new joint venture will further diversify the investments of Toyota in China. This joint venture will focus more on developing hydrogen fuel cell technology for commercial vehicles. The five Chinese companies are Beijing SinoHytec, FAW, Dongfeng Motor, Guangzhou Automobile Group, and Beijing Automotive Group. The name of this new venture is the United Fuel Cell System R&D (Beijing) Company.

The highest stake in this joint venture after Toyota will be of Beijing SinoHytec. This will be a 15% percent stake in the joint venture. The other four partners will constitute 5% each in the joint venture. The Beijing SinoHytec already produces hydrogen fuel cell engines. The laws and policies of China are currently favorable for the development and promulgation of hydrogen fuel cell technology. China deems this technology to be much cleaner than conventional combustion engines. The initial investment of the new joint venture spearheaded by Toyota is 5 billion yen ($46 million). Toyota will have a stake of 65% in this joint venture and will be established by the end of 2020. 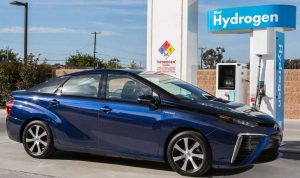 Toyota believes that hydrogen fuel cell and electric-powered vehicles are going to dominate the market in the future. The United Fuel Cell System will build refueling infrastructure in a small region of Beijing, Tianjin, and Hebei in China.  According to Toyota, this is the first-ever company established by Toyota overseas for hydrogen fuel cell R&D. China has a huge strategic advantage in this sector. Hydrogen fuel cell vehicles are widely recognized for being environmentally-friendly as they produce water only. A chemical reaction of compressed hydrogen and oxygen provides power to the vehicle. Electric motors are attached to the vehicles that are powered by the electric current produced in the chemical reaction mentioned above.