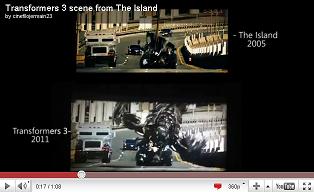 Transformers Dark of the moon had a budget of $ 195 million which used wisely can give us a lot of new footage to feast our eyes however, one youtube user had an eagle eye. He spotted that Transformer’s director, Michael Bay had used shots from his old movie “The Island” which was released in 2005.

As the video below is self-explanatory, I’ll leave you with the clip where CGI has been used to use the scenes from the movie The Island to probably save some production costs.

So before you go out and spend money to watch Transformers, just join The Island and other Michael Bay’s movies with previous parts of Transformers and you have Transformers 3.