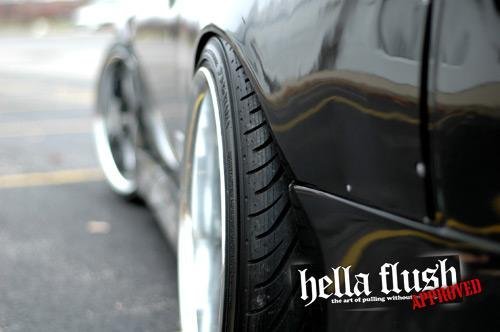 Stance is the name of a company which produces automotive parts especially popular for its GR series coil-overs whereas Hellaflush is the style however lately; few people have also begun to call it “Stance” as well.

The word “hella” is an adjective. It supposedly originated from USA. The people who use it – interpret its meaning as “very” or “lots of” (this car has hella power, this car is hella powerful) and is sometimes even an adverb (he’s hella runnin’ from the cops!). Whereas Flush generally refers to the fitment of wheels and tires with the chassis and fender flares. The closer the wheels are to being flush with the bodywork, the more “hellaflush” that car is.  This generally requires an obscene amount of camber combined with a stretched tire, which changes the angle of the sidewall of the tire.

The other aspects of the Hellaflush cars would be; get your car as close to flush with the ground as possible, and shave door handles, trunk latches, keyholes, gas tank covers, and everything else that keeps the body of the car from being “flush”, or after you’re done with your wheels fitments, do your car a bit in the VIP style.

Stance means the same as well and while the new urban style/fashion trend in cars make them ‘all show and no go’, two-fact, they are lowered to the point that the ride is horrible enough to break an athlete’s back.

It does however look very good but as a car enthusiast, I like function being given priority over form.

Rain do not cause chaos, drivers’ do