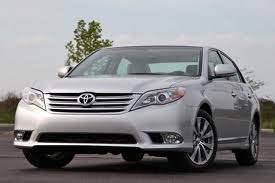 Executives of Toyota in USA told the local dealers over there that atleast 19 new models of Toyota set to arrive in 2012, including a new more fuel-efficient Avalon due in November, 2012.

Toyota made the announcement at the National Dealers Association convention past monday and also showed the picture of the upcoming Avalon while the actual car would be revealed completely in April at the New York Auto Show.

Revealing a bit more details of the new Avalon, a full-size sedan will have fuel economy as good as the Fiat 500 with the five-speed manual transmission.

Dealers also saw a concept fuel cell vehicle that is about a decade from production.

Toyota’s production is back to normal after the natural disasters in Japan and Thailand which affected the parts supply to the whole world including Pakistan.

Apart from the Avalon, Toyota did not reveal any detail about those 19 new models set to arrive in the year 2012 in various markets around the globe. Apparently, they will be introduced one at a time.