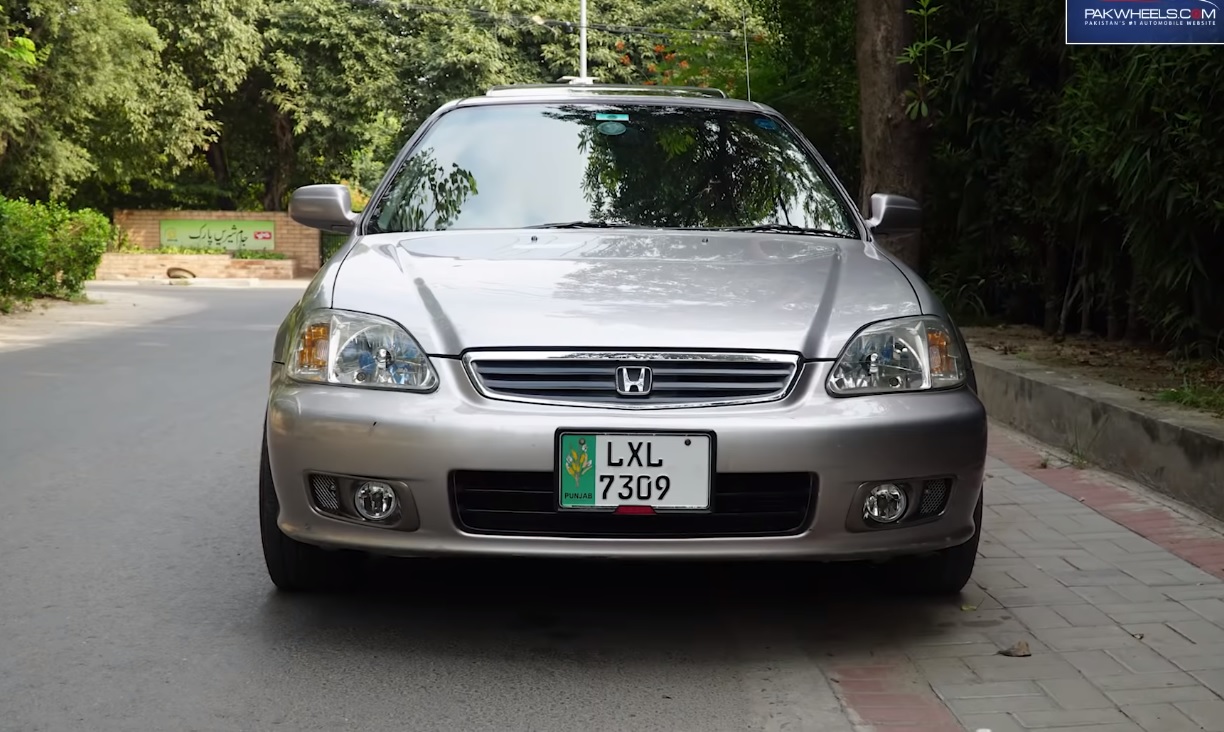 Today the car we will review is a Honda Civic 1999 model. It is a VTi oriel, and it came in two variants automatic and manual. This unit under review today is automatic, and the particular car is very neat and well maintained. The owner bought this car in June of 2018, and according to him, this car is in total genuine condition. The owner really loves Honda cars, especially the old ones, and owned a manual version civic (1999) as well a few years back. When the owner bought this car for 9 lakh last year, the options he had were Toyota Corolla saloon, Xli, and Gli.

The 6th generation Civic came in two variants EXi and VTi. EXi was 1500cc, whereas the VTi was 1600 cc engine. Both cars had an option between an automatic and manual transmission, and the car which came with sunroof was called Oriel. The owner believes that in this price range, there isn’t anything missing in the car, and it has all the essential features he expects from the car of this budget. Upon asking, he said that the unique selling point of this car is its auto transmission and sunroof. The fuel average of this car in the city is 10-11km/l. Do keep in mind the owner has also installed 17-inch rims in this car due to which the suspension of this car has gotten a little stiff; however, with 14-inch alloy rims, the car is absolutely fine on potholes and bumps. The braking ability of 1999 civic is excellent thanks to its four-wheel disc brakes though the ABS system is absent as well as Airbags. While the Japanese version of this car also had ABS as well as dual airbags.

The parts availability of this civic is also excellent even after 20 years. Most of these parts are Taiwan made; however, original ones can also be gotten from Honda dealers, and the pricing is also quite reasonable. The owner has also taken this car on long routes such as Lahore-Islamabad and Lahore-Faisalabad, and the car returns a fuel average of 15-16km/l considering the fact that you drive with a lightfoot.

After twenty years, this car doesn’t have any significant known issues so far, according to the owner. But he did mention that the automatic transmission of this car is a little jerky sometimes when shifting between the gears since this is a non-prosmatic transmission. The owner also told us that the manual transmission civic is better in terms of acceleration as compared to the automatic version. Also, sadly, the auto-transmission is 4-speed, whereas the Manual version enjoys a 5-speed.

In terms of practicality, the rear seats are not flatbed unlike the 7th Gen Civic, and with the front seats adjusted to all the way back, the rear passengers feel a little cramp at the leg space, whereas the headroom is quite ample. This 1999 civic is ideal for four adults for a long trip and five adults for short trips. The rear seats have proper cushioning and feel quite comfortable.

This particular car is in perfect condition, which also tells us the fact that the built quality of the interior in these vehicles was excellent, and there are no signs of paint fading. Even the latest Civic X doesn’t match the build quality of this 6th generation Honda Civic. The owner has also installed an audio system at the boot of this car; however, if one removes the systems, then the boot space is very simple and can store two large suitcases or three medium-sized suitcases. Overall we think this is a complete family car with a large boot, and you can comfortably travel within the city or outside the city without any hassle.

Air conditioning is also quite effective and cools the cabin very easily in hot weather. Do note that this car has analog climate control since the digital climate control was not a norm back in the days. From 1995 to 2001, the 6th generation had the same interior layout, and thee only changes were seen in the exterior in terms of bumper design, front light, and rear lights.

Coming to the resale of this car owner thinks that it is also very good and he gets quite a lot of offers from the people every now and then. There is also a substantial young market for this car which likes to modify these old cars so one should not worry about selling this car later on.

Tesla gets certification to start manufacturing cars in China