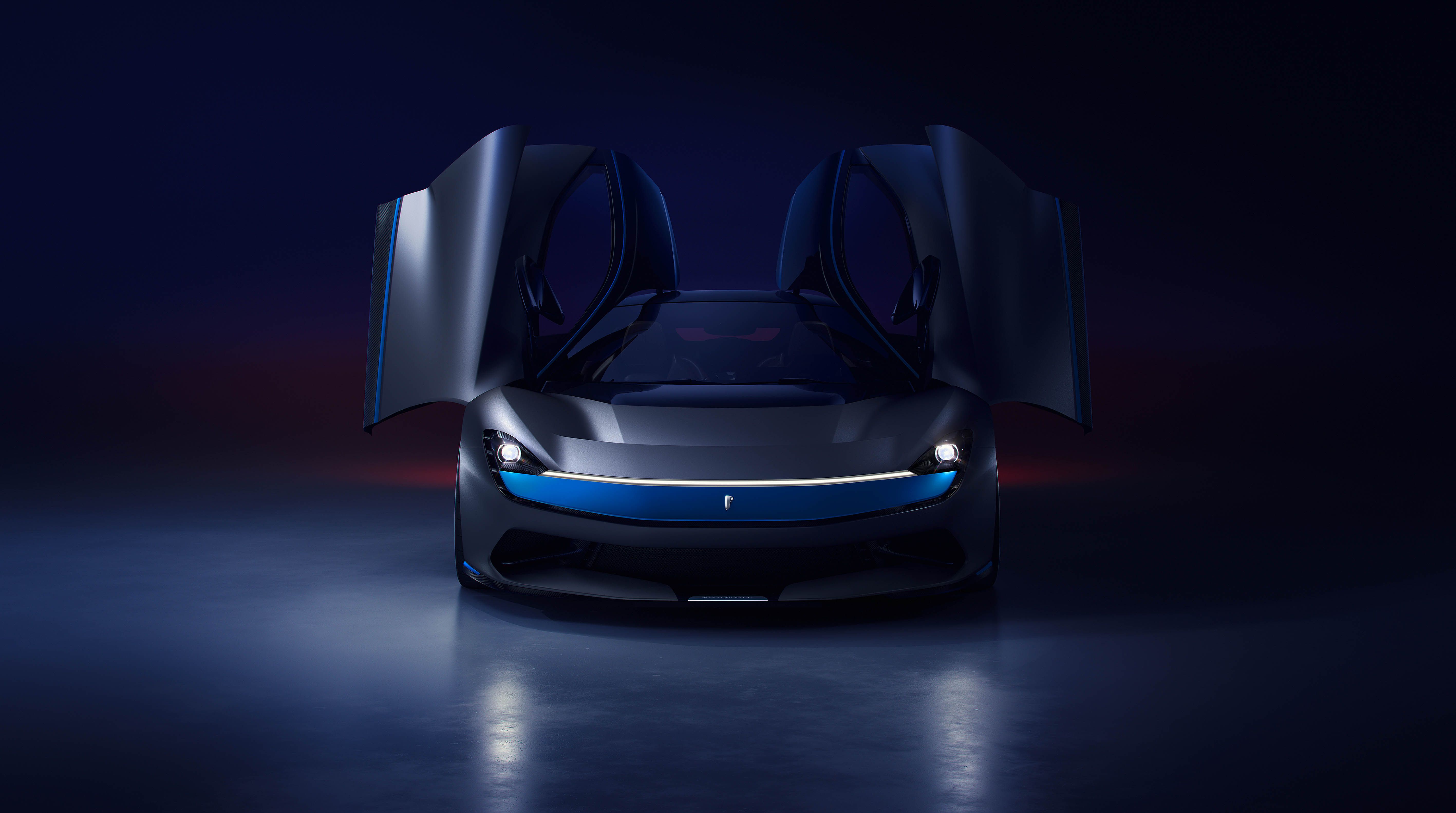 Every Ferrari enthusiast recognizes Pininfarina as the firm that designs some of the best looking cars that exist. Having designed almost every Ferrari in the last 50 years and dozens of Peugeots, Lancias, Alfa Romeos, Cadillacs and Rolls Royce, Pininfarina has decided to jump aboard as a full-fledged car maker. Their first vehicle is a 1900 HP all-electric hypercar! Let’s take a look at the Italian firm’s significant first attempt and see how they may have pulled off a miracle.

When I say the Battista is electric, I mean it: Unlike the Ferrari SF90 Stradale we talked about out a short while ago, which is a plug-in hybrid; sporting a V8 engine in addition to its electric drive-train, Pininfarina’s leviathan is a full battery electric vehicle. Incapable of combustion; the Battista is a zero emissions vehicle, meaning you can set up record times on the Nürburgring while simultaneously saving the planet! Powering the Italian beauty are quad electric motors, mounted at the each of the four wheels, independently powering them. This enables sophisticated traction control and torque vectoring all wheel drive, a type of all wheel drive in which power can be based between individual wheels as the situation demands. This electric apparatus generates a whopping 1400 kW of power, that is equivalent of 1877 HP! More importantly, the car produces all of its 2300 Nm of torque at a mere 1 RPM, this instant availability of torque and the prodigious power figure, help the exotic Italian sprint from 0 to 100 km/h in a blistering 1.9 seconds; reaching 300 km/h takes just 12.0 seconds and the car maxes out 350 km/h. To say that the Battista offers mind boggling performance would be an understatement. In fact, at 1900 metric horsepower, it is the most powerful road going vehicle to have ever come out of Italy, leaving Lamborghini, Ferrari, even Pagani out in the dust. Keeping the motors juiced up is a 120 kWh Rimac battery that enables a range of 450 km. Being all electric also negates the need for a transmission, reducing weight and freeing up valuable real-estate. Braking is by carbon ceramic discs and six-piston calipers, 390mm diameter at the front, 380mm at the rear. While these figures are impressive to say the least, it is worth noting that the upcoming Telsa Roadster has very similar performance claims and promises over twice the range at 1000 km on a single charge.

The Battista shares this powertrain, chassis and thus much of its DNA with the Rimac C_Two. Despite their shared powertrain, Pininfarina’s CEO Michael Perschke is keen to emphasize the substantive differences between the Pininfarina and the Rimac, saying that the two cars will be less closely related than the Audi R8 and Lamborghini Huracán. “We will probably share 40 to 50 percent of the pure technical components,” he said. “There is a raw skeleton of the drivetrain, of the motor system. But how these have been tuned—the acceleration amplitude, the drive mode characteristics—these all come from us and are very different.”

Pininfarina’s bread and butter for half a century has exclusively been to design seductive vehicles for the likes of Peugeot, Lancia and most notably; Ferrari. It is for this reason alone that the Battista’s drop-dead gorgeous looks were not exactly surprising.  It bears a strong resemblance to Ferrari’s design ethos, which again, comes as no surprise. You will be surprised to hear that something that looks this good is actually more function than form. Being lightweight and aerodynamic is the holy grail of supercar design and the Battista is no exception; air is channeled over the front section beneath a slat that runs between the headlights to minimize drag; the active rear wing is formed of two separate (but linked) elements and provides down force to keep the beast on the tarmac instead of a low earth orbit. Despite its radically different powerplant and no requirement to package a tall, bulky internal-combustion engine in the center of the car, the Battista still shares the proportions and basic look of a mid-engined supercar. According to the Chief Design Officer of Pininfarina, Luca Borgogno, there are two reasons for that. “First, we wanted the car to still be perceived as a hypercar, and the normal proportion for that is with the cabin pushed forward and the rear flank very strong,” he said. “But technically it is the right solution as well. For weight distribution, we wanted to put most of the car within the wheelbase, and the batteries are more or less where the IC engine sits in a normal car.”

The inside of the car is where owners spend most of their, so needless to say it must be suitably posh, comfortable and ostentatious for a car of this caliber and stature. And the Italians have not disappointed; the cabin manages to look aggressive, decadent and modern, all while sporting the latest tech. Twin display screens, one on each side of the steering wheel perform both infotainment and odometer duty. The screen and all of the controls are angled towards the driver, giving a cockpit like feel. The craftsmanship and material quality is also comparable to that of the highest end luxury cars.

At this point of the wring, you might have guessed looking at the prowess of the vehicle that it is going to cost an arm and a leg (If you did not then stop dreaming!). While the exact word on pricing is not very clear, it is somewhere between 2 to 2.5 million US dollars! But even if you have what it takes to afford a multi-million dollar hypercar, getting your hands on one will be though. Pininfarina says it will build no more than 150 of the Battista, with plans to split the sales equally across the globe. Fifty will be reserved for the United States of which, according to CEO Micheal Perschke, “more than 65 percent of the cars we intend to deliver is already allocated and reserved by clients.” Another 50 are reserved for the EU, while the leftover 50 will be sold to the rest of the world. This is not an easy car to get your hands on!

The existence of an all-electric, 1900 horsepower Italian hypercar should be a living testament to the fact that electric vehicles are the future. We have seen Ferrari, Aston Martin, McLaren, Tesla, Mercedes-AMG, BMW, Audi, and almost every other boutique carmaker give in to electrification; whether by admission or capitulation. The critics and doubters who think electric vehicles are just a fad and a sign of the times and disregard their eco-credentials and superiority in energy efficiency may reconsider their beliefs after looking at the current EV market at both the affordable end of the spectrum and at the bleeding edge. 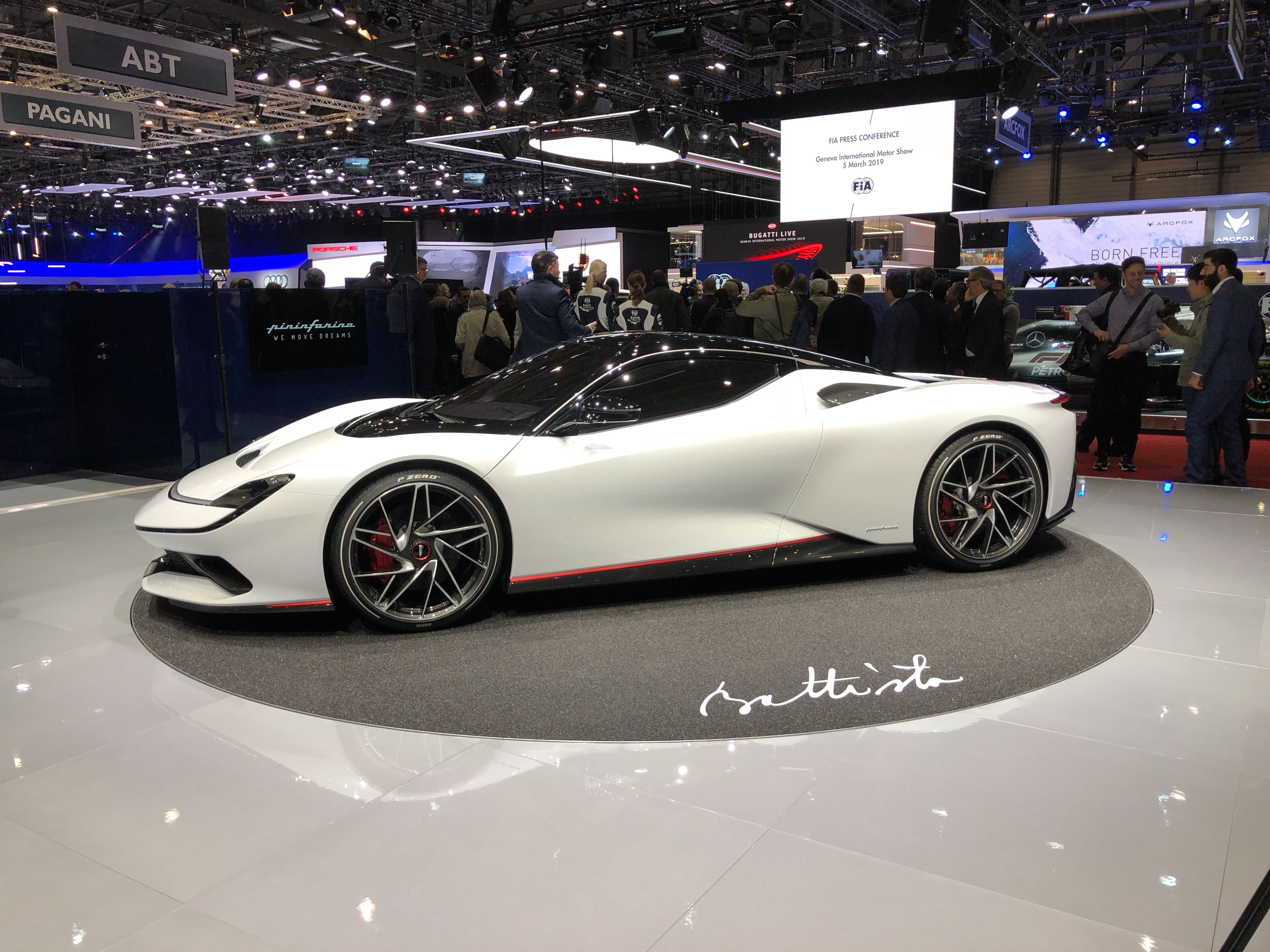 Secondly, it marks the begging of Pininfarina’s entry into the automotive industry as a full-fledged automaker. Beyond the Battista, Pininfarina is already planning the transition to becoming a significant player in the performance car game. Perschke says that he wants the company to be selling between 8000 and 10,000 cars a year within five years, with three other models to be launched in the next three years. Two are set to be crossovers. The other, Perschke hinted, could well be a more affordable sports car. Prices will be lower but still not cheap. “We will probably not get down to a five-figure price tag,” Pershcke admitted. Most notably, none of them will feature an internal combustion engine as Pininfarina sees zero emissions as being a vital part of its brand message: “We are working on another sporty project and then we need to consider the SUV sector, though our plan is never to be mass market.” He says. “We’re not saying we are an electric car company because in the future we may work with hydrogen or some other alternative fuel, but we don’t have any plans to produce an internal combustion engine-powered car.”

The example of the Battista indicates that Pininfarina will also co-develop future models with other companies; Perschke admitted he wants the company to be a “low-cap-ex” brand. But behind such partnerships, the brand is going to have a significant level of its engineering expertise, having recently hired René-Christopher Wollmann, previously project leader on the AMG Project One, who will work alongside a team that includes CTO Christian Jung, formerly of Porsche, and former Bugatti engineer Peter Tutzer. I believe the best is yet to come for Pininfarina and they certainly have my attention for the foreseeable future.