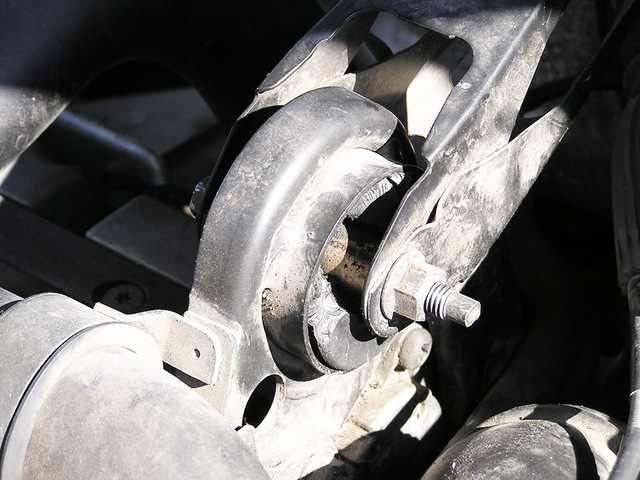 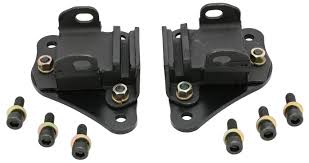 The engine of an automobile is secured under the hood of a car using a mechanism of rubber and metal, called an engine mount, that grips the engine to a certain position allowing minimum movement, noise and vibration. An engine mount has a particular life after which it requires immediate replacement. It is an essential part of the engine that helps stabilizing the engine in the engine bay. Engine mount is small in size and not very expensive unless it has caused mechanical problems with the engine. When engine mounts go bad, they surface some significant symptoms that should not be ignored. The engine mounts are sometimes referred to as engine foundations.

As mentioned above, engine mount is responsible for holding the engine allowing minimum vibration therefore; a bad engine mount will allow the engine to get displaced and will cause excessive vibrations. Vigorous vibrations would be observed especially on cold start up and high acceleration. In case an engine gets displaced, it can even come in direct collision with the fender wells and other parts producing vibration and noises.

A worn out or broken engine mount allows the engine to move. This movement let the connections between the exhaust manifolds and exhaust systems to break or isolate causing leakage. This leakage produces excessive exhaust noises and might let the exhaust gases flow into the passenger section. If you smell exhaust fumes inside the cabin or your exhaust is making noises then it is one of the sign that either the mounts of exhaust have gone bad or the engine mounts have gone bad.

An engine that seems to be unaligned or displaced indicates a broken or worn out engine mount. Displaced position of an engine can be easily identified. If you find you engine sagged or tilted to a certain angle you must get your engine mount replaced as soon as possible. When the engine gets unaligned and goes out of a fixed position, the smoothness of your car gradually diminishes.

The displaced engine comes in direct contact with the metal surfaces of the engine making frequent collisions especially on high acceleration and idling. As a result, it can damage various engine parts like valve cover gaskets and engine manifolds. If you notice cracks on these areas then have your engine mounts checked by a mechanic for damage.

Having said that worn out engine mount can cause extensive damage to valve cover gaskets and engine manifolds, it is also important to know that the damage can be extended to breakage of engine belts and hosepipes due sagged or tilted engine. Sagged or tilted engine can cause the engine belts to stretch extensively so that may result in splintering. Power steering belts, radiator hoses and water pump can experience damage on earlier stages as compared to other belts and hosepipes. However, this only happens in the case of excessively worn out engine mounts.

Engine mounts may also wear out before time due to excessive driving on rough and uneven roads. Problems related to engine mounts are more common older and used cars. So the best remedy to protect your engine mount is to drive slowly on uneven or bumpy roads. And lastly, do not linger on once a problem with your engine mount has been identified. Get it fixed at your earliest.