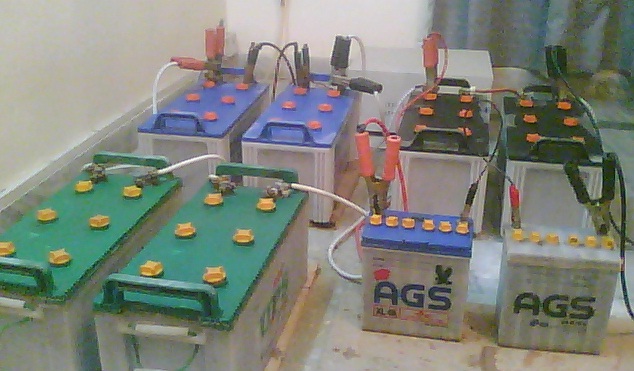 Most of the times, people have problems related to car/UPS batteries where they find it an impossible task trying to justify their batteries’ are death within the first year. Normally they try to visit local battery’s shop where our illiterate technicians try their level best to convince them that the battery is dead and only way out is to buy new batteries. They immediately perform a load testing on discharged battery and show you where the needle is pointing without informing you about the sort of load they have inserted on the battery or at times they measure the reading of hydrometer of one or two cells then inform you regarding the faulty cell without giving you a proper reason. Most of the times the battery is not dead or acid within the battery does not have a right Specific Gravity or topped up with tap water. These batteries can easily be brought back to life by performing a flush and then charging it back for 2 to 3 times. If load testing is performed again on the same battery then you will be surprised to see that your battery was not actually dead as he was trying to convince you that it was dead. Secondly, the procedure which they follow in order to prepare the Sulphuric Acid with gravity of 1270 has many faults which directly reduce your battery life to half. Most of these problems reported (battery dies within a year of purchase) has directly to do with the way you are maintaining your batteries. If your UPS has been trying hard to charge an empty lead acid battery then I can guarantee that your battery will die immediately and there is nothing you can do to bring it back to life.

Sometimes you must have noticed that your UPS is always charging, either of the reasons may imply; because of sulphate built up on battery terminals (UPS is unable to deliver the current which is required to charge a battery), or it does not have fluid inside it which is necessary to charge the lead. In either scenario, you can very well understand that you are wasting energy which should be sufficient enough to run two Air-conditioners during summer season. As normal 145 AH battery needs 14-15 Amperes for charging where as your home Air-Conditioner demands 8 to 9 Amperes of current once compressor is running. So it is very important to maintain your batteries in order to avoid wasting the energy which also can give you high bills. Normally, once you purchase a UPS along with batteries, then you might notice a decrease in the output of UPS within first three months. Now my point here is that this is very abnormal behavior which occurs in every house these days. Different scenarios can cause similar problems as batteries convert chemical energy into electrical energy and chemical properties of battery changes the entire year, so if you will not cope up with the situation then you will experience similar scenarios of high electric bills and battery will die within a year of purchase. This topic should catch an eye of Audience who are using lead Acid batteries and local UPS being sold in every city. Further explanation is given with help of personal experiment performed in my office compound.

Similar scenario occurred with me three years back once I got interested in analyzing the procedure which is used by battery maintenance shops. They purchase Sulphuric Acid in drums and then mix it with tap water in 66 % by volume. They say that chemical reaction causes the water to boil which remove the oxygen molecules from the mixture hence results in giving up gravity of 1250 which they pour it in car battery.

A battery runs fine for minimum 2 years, where as, if it’s all about removing impurities from car battery then they are making a big mistake by adding tap water because it would boil the water but shall not guarantee the removal of impurities present inside the water. I have six batteries of 200 Amps each in my office which supports 15 computers running on them during heavy load shedding. In order to overcome the myth, I purchased the drum of Sulphuric Acid and mixed it with distilled water which I produced in my own lab. I took all my batteries outside and flushed it with tab water to remove all the deposits present inside the batteries. Flush was performed multiple times then batteries were refilled with Acid of 1280 gravity prepared within my office compound. From the past three years, I have been maintaining the gravity of my UPS batteries with Specific Gravity of 1280 by mixing the acid and distilled water as required. Even at the end of third year, my batteries are able to provide 90% backup time as compared to the time of purchase, even after excessive load shedding of 1 hour’s – 5-6 times a day from last three years. Flush is a periodic exercise which is performed at least once a year; I also have adjusted the output of my UPS to charge per battery rate at not more than 8 Amps. Similar procedure was adopted on all my three car batteries which have been running fine without a problem from last three years with mileage exceeding 80000 km each.

In order to cope up with these situations, I would urge that you should always have distilled water stored and Acid with gravity of 1280 prepared with distilled water. Use hydrometer to test the specific gravity and add distilled water or Acid as required. You should also adjust the output of UPS in order to avoid over charging of the battery as that is another major reason when your battery die soon.

I have kept the topic fairly simple in order to provide you with basic information which can help you make your battery last long. I don’t intend to use any equations here as I would not like to confuse the audience but if you are interested then you can make a search on Google to know about the chemical reactions which occurs within a battery.

HOW TO PRODUCE DISTILLED WATER

It is very easy to produce distilled water at home. By distilled water we simply refer to the water which is heated and changes into steam. Steam should be allowed to pass through some system which can condense the steam so that it can change its form back into liquid and this liquid can be collected in some separate container. This liquid will be free from all sorts of impurities and is called distilled water.

HOW TO MIX ACID WITH DISTILLED WATER

HOW TO PERFORM FLUSH

Procedure which I followed was that I took the batteries outside and flushed it with tap water 5-6 times. People normally prepare the mixture of (Espom Salt + distilled water heated at 66 C). Pour the mixture inside the battery and then shake the battery so that mixture can make its way to every cell. Once the mixture has cooled down then they charge the batteries for several hours in order to remove sulphate deposits from batteries. . This procedure is used to recondition old batteries which can still provide you with an output of minimum 10 Volts. You will have to discharge and recharge it for multiple times. After a day or two, perform another flush and then pour the new mixture of acid inside the battery.

HOW TO ADJUST UPS

Most of us are using the similar local UPS sold in market. The only problem with these UPS is that they have few parameters which at times are not adjusted properly. Now once you buy these UPS without testing them, then you may end up losing many electronic equipments and since charging rate of UPS is not adjusted according to the battery which is also why battery doesn’t last longer.

You should always ask local UPS shops to adjust these parameters according to specification given below. If you are interested in learning then ask him to do it in front of you. Mark those parameters with paper tape so that you don’t forget once you do it yourself.

You should be aware of these terms as they are very simple and will give you the right idea about the correct charging and discharging rate of lead Acid batteries. Lead Acid batteries are ideal for scenarios where your load demands very high current for short duration of time such as starting the car that’s why many people are interested in knowing CCA or CA rating of battery before buying them.

Cold Cranking Amperes (CCA) is measure of amount of current your battery can deliver at 0 F for 30 seconds, once both terminals of battery are shorted and voltage does not drop below 7.2 Volts for 12 Volts battery.

Some time battery comes with CA rating specified for 32 F. high CCA rating is typically used for starting application but not referred to deep cycle batteries.

Never short your battery terminals as lot of heat is generated during this process and you may end up destroying your batteries but this is exactly what happens once you start your car. Also note that this is how a load testing is performed.

Normal batteries available in market come with AH (AMP HOUR) rating which means that 145 AH battery can deliver 7.2 Amperes for 20 hours before it would need serious charging again or 14.5 AMPS for 10 hours before it requires charging again. AH rating is expressed in number of amperes a battery can deliver for 20 hours which is calculated by dividing AH rating by 20.

In order to get the best service from your batteries the batteries should not be discharged at a rate more than AH/10, for 145AH battery is 145 AH/10 =14.5 Amperes. But it is ok to discharge a battery with AH rating divided by 6, 4 ,3 so this means that you can discharge your 145 AH battery at rate 145/6= 24 AMPS , 145/4=36 AMPS, 145/3= 48 AMPS but don’t expect it to last for 4 hours. In case of UPS, I am unaware how much load you have inserted and number of batteries you are using in parallel or series but you can use Ampere meter to observer the load on your batteries during load shedding and if you see that the rate on each battery is more then try to add more batteries to your UPS as current divides in parallel.

When you are charging your batteries then right rate to charge a battery is you’re AH rating divided by 10. That for 145 AH battery the right charging rate should be 145/10=14.5 Amperes. Slower charging is good for batteries but you have to be prepared before next load shedding. Anything above AH/10 is termed as fast charging which would damage your batteries in long run but you can do it for few times if your are monitoring the process.

CONCLUSION:
Entire purpose of this topic was to highlight the mistake which our illiterate technicians are making while selling the batteries which reduces the life of your battery to half at times once you purchase it. Secondly, topic has also highlighted mistakes which general public is making while dealing with batteries as they die sooner and they are wasting a lot of power which can comfortably run two Air-conditioners once, they are mismanaging the system. I don’t recommend you to prepare the Acid by your own self as this is a very risky task where individual can easily hurt himself but least you can do is use distilled water, check Specific Gravity of Acid inside batteries by using hydrometer, clean battery terminals on time and maintain a proper tuning of UPS.