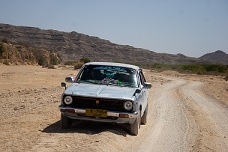 Yesterday, we went exploring spots nearest to city so whenever the cloud pour down the first showers, we hit off to enjoy the greenery that follows in these barren lands.

The spots were awesome, the serenity even under the scorching rays of sun was satisfying that pulled out the chairs and sat down to enjoy the turquoise shaded water in our front, and cozy winds to keep us dry from sweating.

We’ve found more than couple of spots just 50 Kms from the city but the thing that took me by surprise and pure amazement was a scene that Top Gear had to create to shoot one of their episodes. The Jag E-Type town it was but in reality, expecting a town where everyone has the same car is something I had always wished to see but nothing I dreamed off yet I always had it under my vision even though the cars were far off classy there however, when 9.5 out of 10 cars in a town were 1978 Corollas, and the .5 being the KE70 Corolla left me spellbound and regret for not bringing along the camera.

I hate to admit though that even if I had my camera along, the pure essence of the ’78 Corolla town could not be captured as I am still sort of mesmerized as the reel is recalled in my head.

I than asked my colleagues to let me take pictures from their cameras if we return back from the same route which we didn’t, as no one had taken out the camera as we were going through that town and I just kept on quietly enjoying the town of ’78 Corollas.

Why everyone uses only the 78? Because of the rough terrain with gravel, mud, broken roads, etc etc. But there’s more to it. There’s the 78’s reputation, people’s love for it, than RWD, small tires to hover on gravel and thin sand, big body, and a mind-set that disregards today’s engineering. A mind-set of steel-bumpers, round lights, and RWD Corolla.

These were speeding off to the Dam when we were coming back and I quickly called on my colleagues to take a picture. Ill go on there soon and write in-depth with pictures.

A picture from the surroundings of the Hub Dam catchment area.

Punjab government yellow cabs are not being used as a taxi