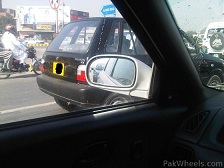 Punjab government yellow cabs are not being used as a taxi

The problem is that the women is not in fact driving it as a taxi but instead is using it as a private vehicle to probably drop her kids off to school. Why else would you scratch the taxi signs and stickers off the car than?

If you look closely, all the stickers of yellow cab are poorly scratched off the doors while the roof-carrier and the cab’s light on the roof has been ripped off leaving little traces of it.

The use of these vehicles was expected since the Nawaz Sharif’s government had launched a similar scheme back in the 90s during their regime which proved to be a disaster impending billions of rupee lost to banks and economy.

Last year, a court sentenced a yellow cab scheme cheat for 14 years in prison after being found guilty of releasing 67 cars whose payment was not cleared.