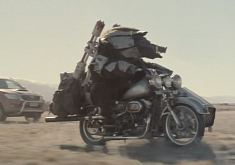 New Zealand’s Toyota has released an advert for the new 2012 Hilux, and Toyota has decided this time to utilize the indestructible image set up by Top Gear. The popular TV show put the Toyota Hilux through everything except a nuclear explosion and the Hilux walked out of it, no push-start was required, a little WD-40 helped in key-starting and it did work.

We at Pakwheels Blog did a small article on how the Toyota was the only car company to have a war named after it. Hoonistan: Toyota is the freak of motorsport

Toyota NZ has just capitalized on that perfect image of Toyota by casting in a wild boar with fire coming out of his nostrils and a chimpanzee, a rugged one, who asks something from the Hilux driver.

Mini armored cars to be imported for maintaining Karachi’s peace