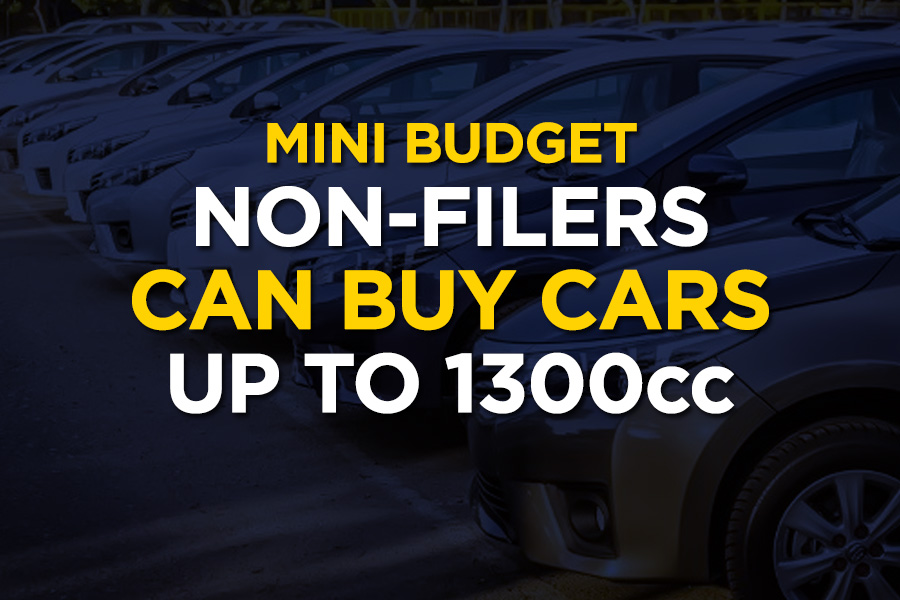 In the mini-budget presented on 23rd January 2019, the government has penalized the non-filers with an additional amount of Rs.20,000 as compared to the previous tax, on the purchase of a new car up to 1300cc.

The supplementary budget was presented by the Finance Minister Asad Umar on Wednesday, in which the government has decided to lift the ban from the non-filers in the purchase of a new car up to 1300cc engine capacity. The recent move of the government has been lauded by the potential buyers of this league of cars but the lift of ban has come at a cost of paying an extra amount of tax which might not excite a majority of non-filers. By doing so, all those who file their tax returns have been benefited and the rest shall seek encouragement to become filers. This move is taken by the government to bring more people under the tax net that will help generate a good amount of revenue and at the same time keeping the local automobile industry alive with its sales and production that had considerably dropped since the ban on non-filers to purchase cars under the previous tax policy.

Most of the people would be wondering right now is what exact amount of tax they will have to pay now to purchase a new car up to 1300 cc? And what is the difference between the tax paid by a filer and a non-filer under the new policy? Keeping it simple, if you are a non-filer and looking to purchase a car with an engine capacity of 1300cc, it will cost you an additional Rs.20, 000 on top of the 40, 000 amount you were paying previously under the old tax policy. This is something you should not be excited about, because this means now you are going to pay Rs.60, 000 to buy a new 1300cc car as a penalty for not filing your tax returns. This is also two times the amount, a filer will be paying for the same car which is Rs.25, 000. The previous tax amount for non-filers on purchasing a 1000cc car was Rs.25, 000, which has now been increased to Rs.37, 500. Therefore, if you are looking to purchase one of the following locally manufactured cars up to 1300cc engine capacity, the difference in the tax amount for a filer and a non-filer will give you the exact idea of how much you need to pay more as a penalty for not filing tax returns.

Although the restriction was lifted from the non-filers to purchase cars up to 1300cc however, it came with an alternative way of penalizing them in the shape of an additional tax. This step is most appreciated by Pak Suzuki and why not because they have the most number of cars in this league of engine capacity being produced in Pakistan. Pakistan is currently facing a budget deficit of more than Rs.2 trillion per annum which is expected to reduce by bringing more people under the tax net. In terms of tax-to-GDP ratios, Pakistan is also ranked lowest at 12% in its region. The reason behind facing this hefty loss is that only 1.4million people in a population of nearly 200 million people file their tax returns. By penalizing the non-filers in the country, people shall be encouraged to file their tax returns and play a part in the stabilization of the economy of the country.

On the other hand, the government has also increased duties on imported luxury cars above 1800cc engine capacity from the previous 20% to 25%. To reduce the current deficit and increase the revenue, the extra amount of Federal Excise Duty (FED) is implemented on imported cars. The import of cars will be discouraged to boost up the local automobile industry and decrease the pressure of the rising current account deficit. In the current scenario, where the country is suffering from a huge amount of deficit, everyone should play their part by filing their tax returns and bringing stability to the economy of Pakistan.

Let’s see if this recent tax policy brings more people under the tax net or people stay contented to pay an extra amount of tax for the purchase of cars. Stay updated with all the automobile industry news with PakWheels. Share your valuable opinion in the comments section below.