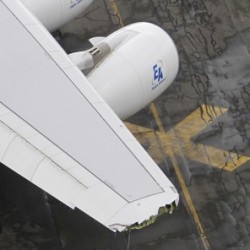 The world’s biggest jet liner and Airbus’ star jet was grounded on after clipped its wing while taxiing,  the world’s largest airliner’s wing clipped a building ripping off the right winglet and putting the aircraft out of service and unable to fly. The European jet maker than had to cancel demonstration flights it had planned for Paris Air Show.

But embarrassment for Airbus doesn’t end there, its military transport carrier, A400M was also forced to pull out of the displays because of an issue with its gear-box. But this isn’t the first time the size of the Airbus A380’s size is of been an issue, recently, an Air France A380 struck the tail of a CRJ 700, causing it to spin out.

However, Korean Air jumped to the rescue of Airbus by offering one of their own A380s to Airbus for their demonstration flights at the Paris Air Show, quite smart indeed.

Photos by Niek van der Zande, via FlightBlogger and Reuters.