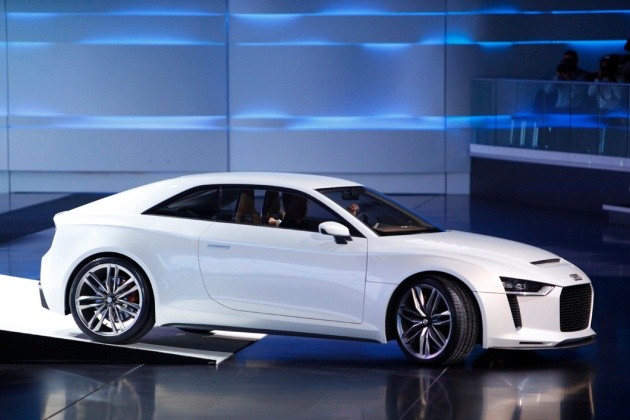 Audi Quattro is back!

Quattro was the car in my opinion which raised Audi to the fame it has today. Many widely regard the Quattro as the most powerful rally car in history with the Sport Quattro S1 having power of 441 HP. Quattro was an Italian word which meant four, in that time the Quattro was the first car to take advantage of the new rules that allowed four wheel drive vehicles in rally.

Audi Quattro dominated the group B rally with 8 total number of win including the first ever female driver; Michèle Mouton to win 1981 San Remo.

But as we all know what happened with the group B rally, Audi had announced after the cancellation of group B rally that they were testing a 1000HP newer engine which the driver regarded as impossible to control.

Jalopnik reader recently caught the Audi Quattro concept in Malibu and the news is; Quattro will get a limited production run.

It was a road and rally car but just like the Stratos concept, the Quattro concept that Audi has revealed today confuses me whether it would live up to all the hype it built up or not? only time will answer the question we car guys have in mind, will the Stratos(Ferrari in disguise) and Quattro are just about as good as showpieces or will be able to continue the reign their ancestral cars set up or this could very well be one of VW’s attempt to surpass Toyota as world’s largest automaker.

Charade DeTomaso 926R Was The Supercar Of Daihatsu