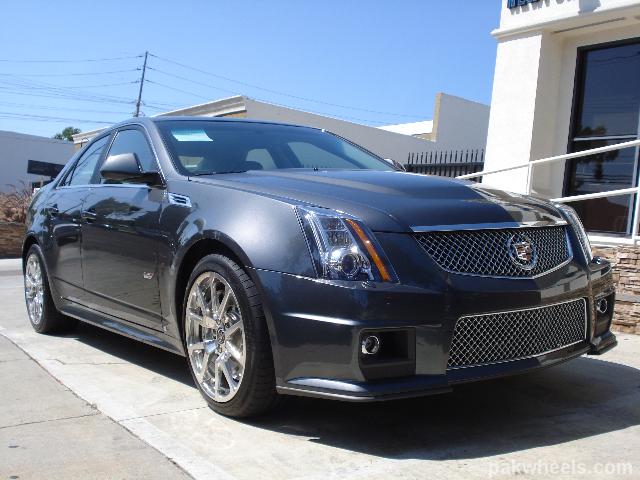 The 2009 Cadillac CTS-V is not only one of the best American performance cars ever created, it is one of the best performance cars created anywhere in the world. The monster motor installed in a sedan makes for one hell of a driving experience. The car feels very raw and doesn’t try to hide its potential in any way. The sound is just menacing and its unbelievable that a sedan could sound better than many sports car out there.

The particular car that I drove had the six speed automatic transmission. Although I would’ve preferred to drive a manual trans car. I think the automatic would allow me to make better comparisons with the AMG C63, M5, XFR, etc. Speaking of the transmission, it’s the only part of the car that is a let down, upshifts are cumbersome and I found myself banging into the rev-limiter a few times with the engine brap-brapping away. I didn’t care much for the AMG style shift buttons behind the steering wheel, although they worked ok. I would still prefer steering wheel mounted paddles. The throttle response of this car was up there with the best, even part throttle in higher gears felt like I had floored the throttle. The front of the car lifts up and the motor just catapults you forward. In a straight line you would never guess that 60mph comes up in a little over 4 seconds, it feels more like 3 seconds. The incredible acceleration shows no signs of losing strength throughout the gears.

The steering was precise but not razor sharp, which is fine for a performance sedan. The whole chassis was very responsive but I felt that the car would understeer at the limit. Needless to say, I had the traction control on throughout my test drive, a wise decision because the car did get a bit sideways very quickly. The CTS-V is just one of those cars that you don’t want to stop driving. The torque is incredibly addictive and I dug into the deep reserves every chance that I got.

The only car that I can compare the CTS-V to is the AMG C63. The XFR is an amazing car as well but the thrill that you get in the CTS-V and the C63 are at a different level. I think the sound of the engine has a lot to do with the whole driving experience. The CTS-V leaves the M5 so far behind that it really isn’t even a threat. Even the C63, the closest competitor, is easily dispensed. Credit for the phenomenal performance goes primarily to the crazy motor. The chassis is well balanced and is an adequate match for the motor, if the chassis had lacked potential in any way the fault would be glaring. The brakes were well up to job and despite not being the track package brakes were strong enough to haul the car down quickly from high speeds.

The interior of the CTS-V is very well designed and I loved little details like individual LCD displays for temp control and LEDs that followed the tach and speedo needles as they swung around. The quality of some of the materials was sub par, the black “piano finish” plastics felt very cheap. Overall, the car is still an excellent value and if I was shopping for a performance sedan I know exactly which car i’d get.

Audi Quattro is back!